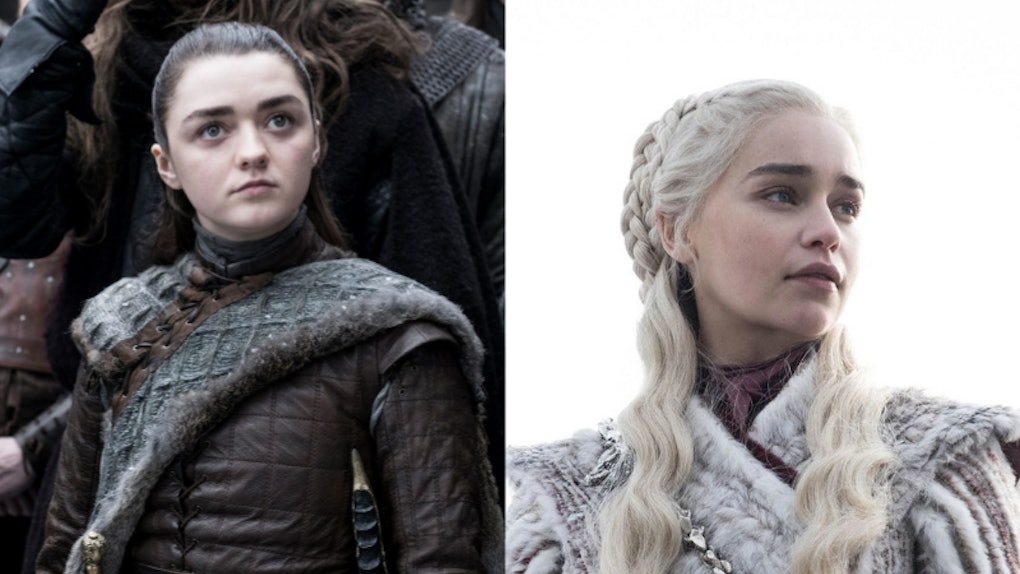 Will Arya Kill Dany On 'Game Of Thrones'? Fans Are Convinced The Finale Will Be Bloody

While Arya Stark headed into the Sunday, May 12 episode of Game of Thrones with a mission to kill Cersei Lannister, she quickly changed her course of action after the Hound urged her not to pursue revenge. After Daenerys and her dragon destroyed King's Landing, fans are now hypothesizing about Arya's next moves, and you might be wondering: Will Arya kill Dany on Game of Thrones? Here's why fans think it's a possibility.

Episode 5 of Season 8 saw Daenerys Targaryen turn into the Mad Queen after her army had a taste of victory. While the bloodshed could have been over quickly, judging by the fact that Cersei's army laid down their weapons and surrendered, she chose to go on a killing spree around the city. With Cersei now out of the picture after rubble collapsed on her and Jaime, it appears that the prophecy that Arya would kill someone with green eyes could now apply to Daenerys — and Twitter is losing it.

After Arya witnessed the destruction of King's Landing and the death of countless innocent citizens first-hand, the youngest Stark daughter vowed, "I'm going to kill the queen" before riding off on a mysterious white horse that happens to appear.

During Episode 6, it's likely that the victors will be heading back to Winterfell to regroup, and something tells me that Jon Snow, Sansa Stark, Tyrion Lannister, and more will have something to say about Daenerys' decision to go rogue and kill countless innocents with dragon fire. It's safe to say that Arya Stark is probably adding Daenerys to her list — especially if the Mother of Dragons decides to go after her sister, Sansa, for telling Tyrion about Jon's Targaryen lineage.

After the chilling events of Episode 5, it's likely that Daenerys' most loyal supporters — Jon Snow and Tyrion Lannister — will be turning against her and beginning to question her fairness as a ruler of the Seven Kingdoms after the senseless carnage at King's Landing. Varys' predictions about Daenerys flipping a switch and deciding to rule with fear came true, contrary to their forecast — and it's possible that they'll be forced to pick sides if Daenerys chooses to punish Sansa Stark for telling Tyrion the truth about Jon's claim to the Iron Throne.

Now that King's Landing has been won and the war is over, it remains to be seen if Daenerys decides to kill the survivors if they refuse to bend the knee or question her tactics — and if Jon Snow, born Aegon Targaryen, decides to cast aside his loyalty to his queen and finally makes his identity known to pursue his better claim to the throne and hopefully prevent more deaths. Only time will tell if, how, and when Arya will decide to make her move and strike against the Dragon Queen, but fans will probably be sharing more theories leading up to Episode 6, which airs on HBO on Sunday, May 12 on 8 p.m. CT.