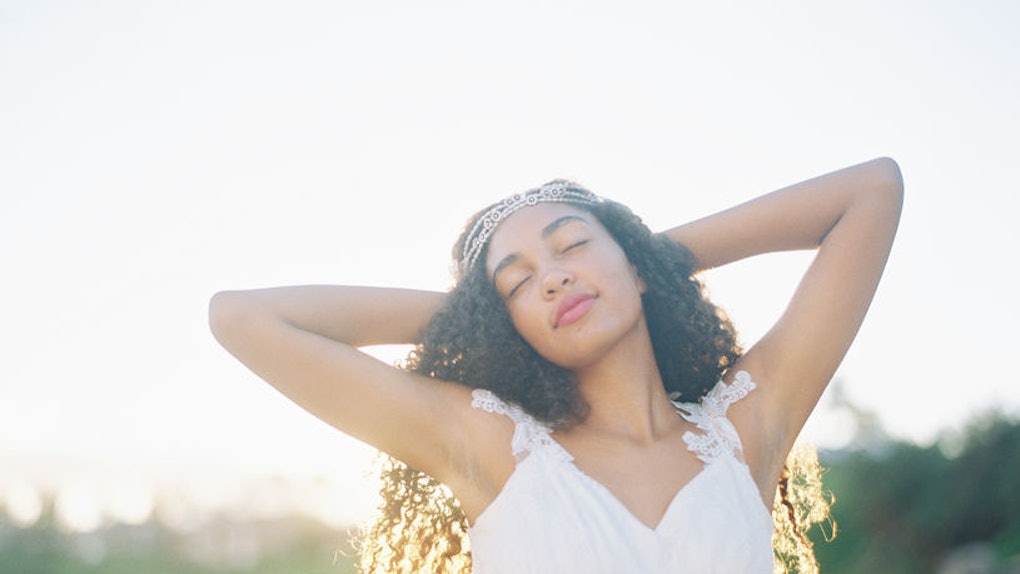 The Hidden Benefits Of Meditation, According To Experts, Make The Practice SO Worth It

Sometimes, even if you know something is good for you, it can be hard to actually make yourself do it. Meditation is definitely one of those things, you know? The idea of taking some time each day to just sit and breathe, when things are always so busy and all over the place, can seem impossible. But many of the benefits of meditation are hidden, in a sense, in that you can't really see them. You feel them, and you notice their development over time.

But it's all too easy to put something like meditation on the back-burner when the results of practicing it aren't quite as tangible or visible as, say, a consistent exercise routine, or a resolution to keep your room clean. That doesn't mean it isn't worth the effort, though, right?

While some of the benefits of meditation are talked about all the time, like feeling more centered and calm, there are more positive side effects of a consistent practice that you may not be familiar with. But, if you really want to experience those benefits, you have to be committed to meditation as a regular part of your routine, rather than as something you do, you know, whenever you remember to do it.

If you manage to stick with the practice, experts say you'll soon start to notice these five lesser-known benefits in your well-being.

You Can Actually Focus On Things

"Most people think meditation is about learning to control your thoughts," natural lifestyle expert and author Jaya Jaya Myra tells Elite Daily over email. "But it's actually about learning how to focus on one thing intensely. Thoughts never really go away, per se; they are always there. People who have solid meditation routines learn how to focus in a way that [helps them] no longer notice the thoughts."

It's definitely a tricky concept to wrap your brain around, but Myra says it's similar to the way you feel when you get absorbed in a movie or TV show you're watching. "There may be other sounds or things happening around you, but you won't notice," she explains. "It's the same with meditation. Even though the thoughts are floating around in the mind, you learn not to notice them because you're immersed in something else."

In fact, she adds, this is exactly why many meditation techniques use visualization, mantra, or breath, because all of these things give the mind the ability to focus on something tangible. When you practice that during meditation, Myra says, it carries over into your ability to focus on, say, writing a paper, or even a conversation with a loved one.

You Learn The Value Of Consistency

"The secret to success is through consistency in practice and repetition, and that's because of how the brain works," Myra says. And being consistent enables you to create a new pattern, which eventually evolves into a full-blown habit. Before you know it, Myra explains, this new habit basically overwrites what was previously in the mind. "Neurons that fire together wire together," she tells Elite Daily.

In other words, if you stick with something long enough, like meditation, it really can change the way your brain works. "You're literally creating new neural connections when you are consistent with something," she says. Pretty wild, right?

You Become More Aware Of Your Thoughts

According to life coach and author Meridith Hankenson Alexander, meditation can be a wonderful “reset” tool for your mind — but, like most tools, you have to be patient as you learn how to use it correctly and efficiently. Along the way, though, Hankenson Alexander tells Elite Daily, you'll likely start to notice yourself growing more aware of your thoughts, not just during your actual meditation sessions, but at any given point in the day.

"You begin noticing when your thoughts do not empower or serve you, and without judgment," she says. "Begin practicing on replacing them with new, more productive ideas." For instance, instead of beating yourself up when you don't do something "perfectly," rather than think, "I'm such an idiot, I always make mistakes like this," try to shift your thoughts to something realistic and more positive. Remind yourself, "I'm only human, and I'm trying my best."

More specifically, says Joy Rains, author of the book Meditation Illuminated: Simple Ways to Manage Your Busy Mind, you become less judgmental of yourself. This goes back to the whole negative versus positive self-talk issue: Everyone knows what it's like to be stuck in a spiral of negative thoughts, where you can't seem to stop beating yourself up for even the most trivial things.

It's certainly not easy to stop those thought patterns, but Rains says meditation is one of the best strategies you can possibly use for silencing that overly critical, judgmental voice inside your head that's always telling you you're not good enough. Think of meditation as giving the proverbial finger to those consistently self-sabotaging mindsets.

"The intent of meditation isn’t to suppress thoughts and feelings," Rains tells Elite Daily. Rather, she says, it's kind of similar to shifting gears in a car from "drive" to "neutral." In that "neutral" state, the mindfulness expert explains, you have a better ability to look at your thoughts, even the particularly awful ones, as clouds passing by, or like a boat floating past you as you watch from the riverbank.

"Allow it to pass without judgment, and gently refocus on your anchor," Rains says. "The repetitive action of refocusing trains you to become mindful."