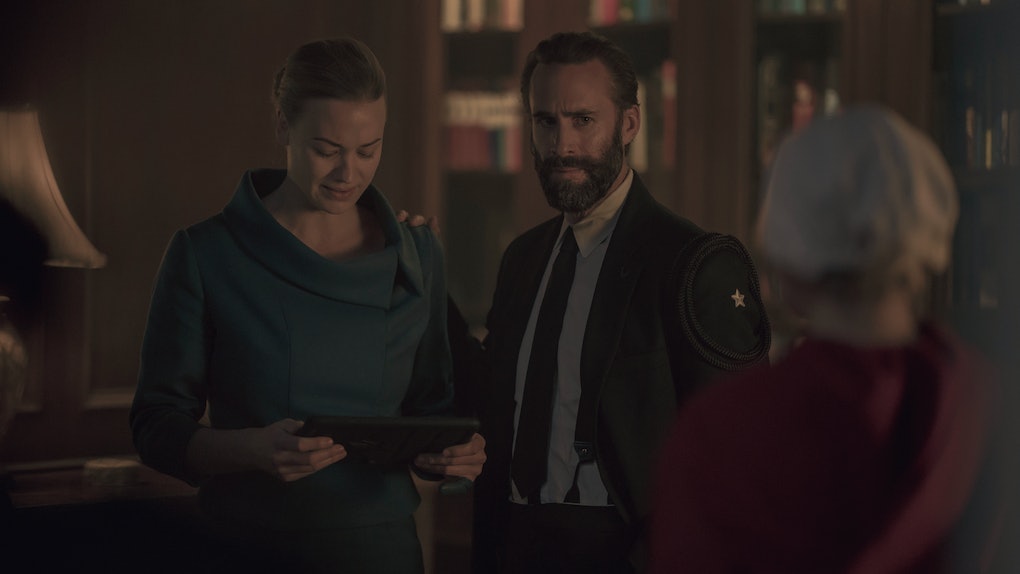 Just when The Handmaid's Tale Season 3 was starting to get really interesting, the show decided to refocus on what it believes to be the most essential part of the story, the fight over Nichole. Despite the promises that June was getting down to work and getting her hands dirty as part of the revolution, Episode 4 turned the story back to babies, and who can have them versus who can raise them. It ended with the reveal the Eyes were watching Nichole in Canada. The Handmaid's Tale Season 5 Episode 5 promo suggests Nichole may be in more danger than anyone realizes.

In Episode 4, "God Bless The Child," viewers learned that not only had June's husband Luke bonded with Nichole, but he was also taking her out with him to protests, like the one held to support the rebels in Chicago. But that meant Gilead's KGB outfit, the Eyes, had seen her and brought the footage to the Waterfords to goad them into trying to rescue their baby.

Not only does it look like the plan has worked, with Serena Joy back on the wagon to get Nichole back by hook or by crook, but it also looks like June's trusting nature is about to betray everything she worked for in getting the kid out.

The synopsis for Episode 5 "Unknown Caller" is as follows:

June and Serena grapple with a new revelation about Nichole, leading to an incident that will have far-reaching ramifications.

"Unknown Caller" is clearly the name that will appear on Luke's phone when June is manipulated into calling him and convincing him to meet with the Waterfords and let them be in the same room with the baby. (This is a terrible idea, and Luke should refuse.) And yet, one would imagine Luke loves June enough to trust her, leading to what I'm going to guess will be is an international kidnapping incident. Because nothing good can stay in a world where Gilead exists.

The real question is if Commander Lawrence will get involved with this at all, or if June will be floated out on her own, basically a servant to the Waterfords once more. In a better world, one might hope Lawrence would step in, but he's shown a real unwillingness to risk anything of his own, including anything that could risk having his wife taken away.

As for the second round of Luke versus the Waterfords, the first time these three met in Season 2, it was an extraordinary moment, because they were not on equal footing. Luke was a protester, Waterford was an honored ambassador. Now they will be on some kind of equal status, at least at first, from the looks of the trailer.

The real question is who leaves the meeting with the child. Do the Waterfords use their Gilead security to steal away the baby? Will Luke be smart enough to refuse them access to the child? That would be its own kind of international incident, but at least one that would keep the kid safe, and not undo June's sacrifice.