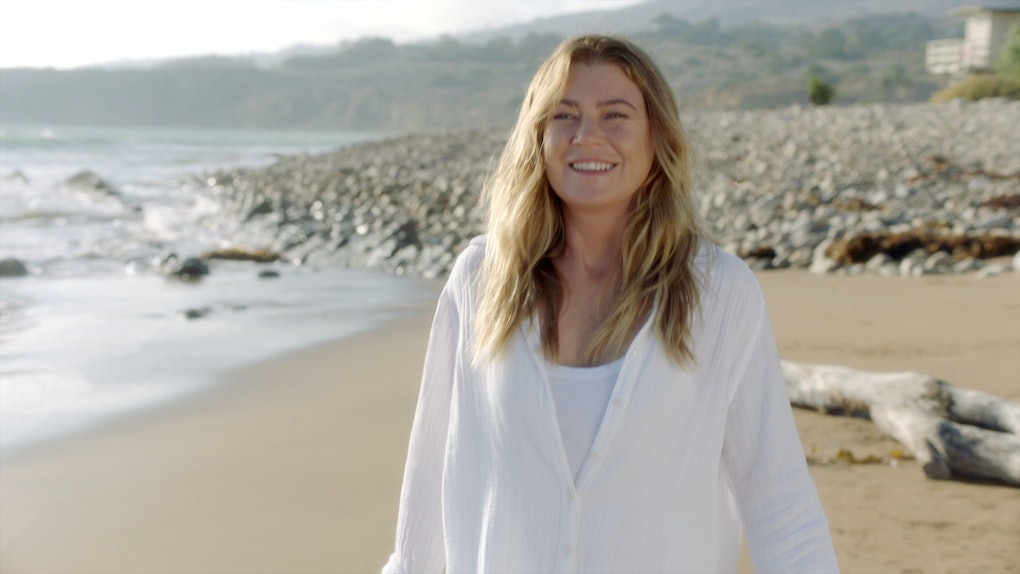 If you thought McDreamy would be the only beloved Grey's Anatomy character to make a surprise appearance in Season 17, think again. Fans were shocked when the show brought back Patrick Dempsey's character Derek Shepherd in a series of dream sequences with Meredith (Ellen Pompeo). But according to the Grey's Anatomy Season 17, Episode 4 promo, another familiar face is coming.

Warning: Spoilers for Season 17, Episode 3 of Grey's Anatomy follow. On the Nov. 19 episode of Grey's Anatomy, which is fittingly titled "My Happy Ending," Meredith was diagnosed with a serious case of coronavirus. She continued to have visions of her and Derek reuniting on a beach as her condition got progressively worse. Episode 3 ended with the late McDreamy telling his wife, "I'll be right here when you're ready," which could unfortunately be soon...

In the upcoming episode, "You'll Never Walk Alone," things seem increasingly dire for the show's lead. The promo begins with Webber greeting an unconscious Mere, as Amelia tells Link, "Meredith's not improving. They can't wake her."

But while the promo is sure to give Grey's fans tons of anxiety about Meredith, it also gives them major cause for excitement: "As Meredith's life hangs in the balance, another person from her past returns," the clip promises cryptically. Next, it shows Meredith on the same beach as before, this time approaching a nearby figure in a lifeguard house.

"Excuse me!" she calls out. Then, seemingly recognizing the person in her dream, she smiles and puts a hand to her chest. Ugh, and that's all audiences get to see for now, since the preview ends before revealing the mystery visitor's identity.

Who could this person be? It would be a treat to see Cristina Yang and have the Twisted Sisters together again, but the beach seems to feature Grey's Anatomy characters who have already died. Whether that means Meredith will encounter Lexie, Mark, Ellis, or someone else entirely is anyone's guess.

Here's what else is going on at Grey Sloan Memorial Hospital in the upcoming episode, per the official synopsis:

Owen faces a medical diagnosis that challenges more than he imagined. Meanwhile, Koracick begins to go stir crazy; and Maggie gets a not-so-subtle glimpse into Winston’s background

Fans will have to wait an extra week to find out which familiar face Meredith dreams of, since the Thanksgiving holiday will bump Grey's Anatomy's next episode back a week. Season 17 continues on Thursday, Dec. 3, at 9 p.m. ET on ABC.