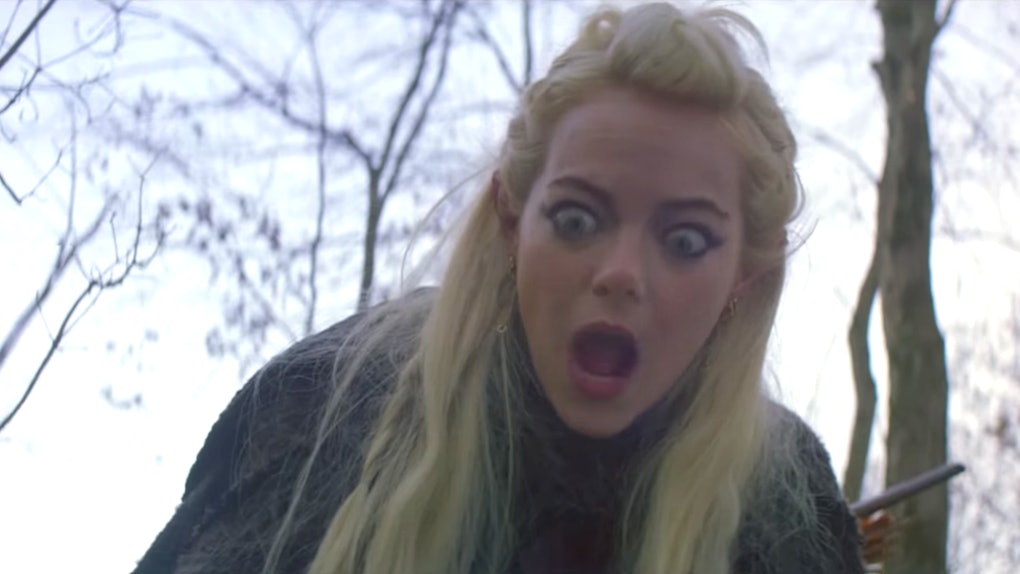 Emma Stone and Jonah Hill are jumping between multiple realities in the new trailer for their upcoming Netflix show Maniac, which is packed with so much mind-bending action that you will probably need to rewatch it a few times. After dropping a wordless teaser last week, the full trailer for Emma Stone and Jonah Hill's Netflix show Maniac is finally here to better explain the concept for the trippy new series, promising an epic-looking sci-fi saga in which Stone and Hill are transported to a ton of different universes with one another.

But before all that reality-jumping craziness goes down, we meet Justin Theroux's character, Dr. James K. Mantleray, who is running the experimental drug trial that Emma Stone's Annie Landsberg and Jonah Hill's Owen Milgrim have signed up for. Dr. Mantleray promises that his trial can "solve" the human mind and destroy all pain, although Sally Field's character Dr. Greta Mantleray (presumably related to Dr. James Mantleray somehow) fears that the trial may be dangerous.

We don't find out much about this mysterious drug trial, save that it involved an A-shaped pill and patients being strapped into chairs as they fall unconscious, but the new trailer does give us a magnificent look at the trial's effects. The drug transports the minds of Annie, Owen, and the rest of the trial's participants through various realities, transforming them into everything from high-level government officials to archers from a high-fantasy realm. Check out the world-bending full trailer for Maniac below:

The one thing that remains constant throughout these wild alternate realities is the fact that Annie and Owen keep finding one another, something that seems to go against the goal of the drug trial. Dr. Mantleray's assistant Dr. Fujita (Sonoya Mizuno) informs her boss that she keeps trying to separate Annie and Owen in these new realities, but somehow, they keep coming back together.

But of course, the most dazzling element of the new trailer is all of the strange and surprising new places that we see Annie and Owen jump between. One reality shows Annie and Owen married to one another with children:

Another sees Owen as some sort of partying government official:

And then we see Annie go full Lord of the Rings as an archer in what appears to be a high-fantasy world of some sort:

Probably the strangest shot of all, though, features a purple, animatronic koala bear, which pops up between the reality-jumping montage. Umm, what is going on with this thing?

It is safe to say that Maniac is going to be unlike any show we have seen before, which is business as usual for writer, director, and producer Cary Fukunaga, whose recent television shows have been strange, mind-bending works: True Detective and The Alienist.

Maniac is being described as a limited-series black comedy, and although the new trailer helps clarify the plot a bit, much of what the series has in store for viewers remains a mystery. The new show will premiere on Netflix on Sept. 21, 2018.