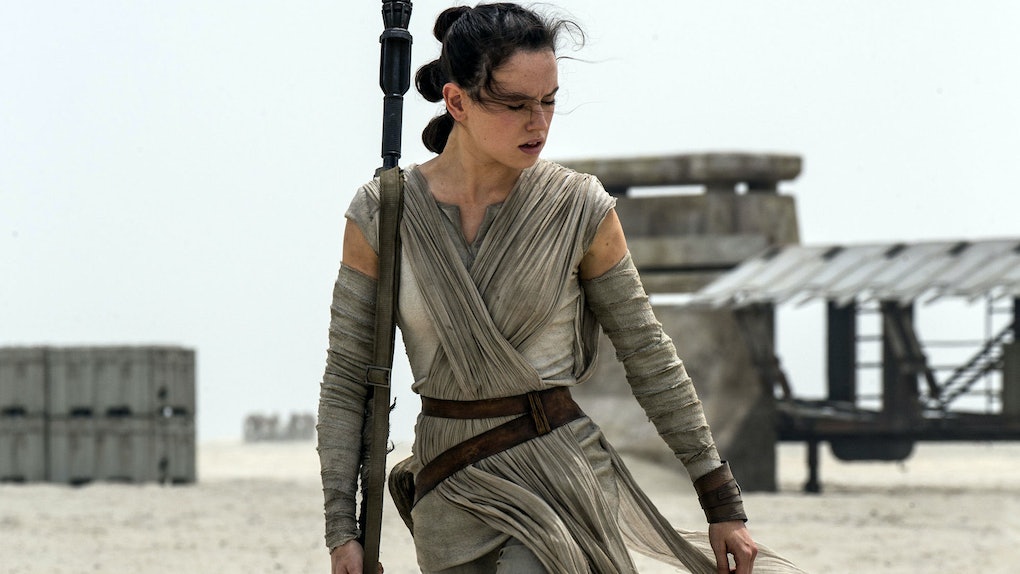 Did you hear that? The sound of blaring trumpets? It's the Star Wars theme song, and it's going to be the soundtrack to this Christmas, as Episode VIII, The Last Jedi, steamrolls into theaters like the movie empire it is. While the holiday season has now bowed down to Disney's Lucasfilm as the Supreme Leader in entertainment for three years running, it's been a while since its opening salvo, Episode VII, The Force Awakens was on the big screen. So before you head to see The Last Jedi, let's review with our Star Wars: The Force Awakens recap.

There was a young boy named Anakin, son of Shmi Skywalker. Born into slavery, he was freed by two Jedi, Qui-Gon Jinn and Ben "Obi-Wan" Kenobi, who declared the boy "the chosen one." The latter attempted to train Anakin himself, but failed miserably. The young man did everything he shouldn't, including secretly marrying Senator Padmé Amidala of Naboo. Anakin then joined with the Dark Side and Emperor Palpatine, and slaughtered all the Jedi. His fight with Obi-Wan left him injured to the point that he had to wear a life support suit, and became known as Darth Vader.

Meanwhile, despite it being far in the future with amazing technology, Padmé died in childbirth. Her twins, Luke and Leia, were hidden away from their father; one became the daughter of a senator, the other the son of a farmer. They found each other anyway, via some plans in an R2 Unit that were stolen by the cast of a completely different movie, plus an aging Obi-Wan and a smuggler named Han Solo (who Leia later married.) Together, they joined the rebellion, defeated Darth Vader and the Emperor, and brought down the Death Star and the empire.

When we rejoin the story, it is 30 years later, and once again, there is a rebellion (now a "Resistance"), smuggling plans, and a pilot named Poe Dameron who has just been captured. But one Storm Trooper, Finn, seems really not OK with his whole "evil peon" lifestyle. In order to escape, he frees Poe and together they flee.

Down on Jakku, there's a young woman named Rey NoLastName who makes her living as a junk peddler, harvesting parts from old star cruisers and living in other random space props left lying around after the first six movies ended. And she's just made friends with an odd little unit that calls itself BB-8.

Finn wakes up to see Poe is gone from their crashed capsule, and assumes him dead. He stumbles into town, only to find the BB-8 unit and Rey. They get chased by Storm Troopers, and in their rush to get away, they wind up jumping in a pile of space junk that just so happens to be the Millennium Falcon, Han Solo's old ship.

Rey and Finn aren't gone for too long before Solo and his old pal Chewie come grab their ship. (And then have to run for it when several people they owe money to turn up as well.) With Solo's arrival, BB-8 reveals his stolen data: It's a map to find Luke Skywalker.

The Man In The Kylo Mask

Meanwhile, under a new Dark Lord emperor named Snoke, we meet Kylo Ren, the son of Han Solo and Leia, and all around wannabe Darth Vader. He and his pal Hux are rebuilding the empire as "the First Order." And they're plenty mad about losing that BB-8 unit.

Han takes Finn and Rey to meet Maz Kanata, with the plan to get a new ship, and offload Finn, who has decided to make like Southwest Airlines and get away. These plans fail completely, since spies report their arrival. But before the First Order lands on their heads and destroys Maz's abode, Rey accidentally finds Luke's lightsaber, and sees visions of their pasts.

Kylo Ren, it turns out, is having a good day. First he takes the Starkiller base on a test run and randomly destroys a few planets full of extras, and Doctor Who's companion Martha Jones. Then, though he fails to get the BB-8 unit, he does capture Rey, who it turns out is the more valuable target.

Gramps Is In The Resistance

Everyone else gets rescued by the Resistance team, which flies in and takes them home. We finally get a Han and Leia reunion, and learn Poe survived, before everyone heads back out to rescue Rey, take down the Starkiller Base and have a nice movie climax.

While Rey is doing the self-rescuing princess routine, Finn and Han and Chewie wander around the station cracking wise and putting Gwen Christie's shiny Chrome Trooper in a garbage chute. When they finally all meet up, it's Han vs Kylo time, and we learn Kylo's real name is Ben (after Obi-Wan, awww.) That "awww" is short lived though, since Kylo then murders his father.

The movie major moment comes as Poe leads the team to take down the Starkiller base while Rey and Kylo Ren have it out lightsaber-a-lightsaber, with Finn lying knocked out cold in the snow. Rey bests Ren, leaving him with a scar across his face to remember her by, and all our heroes fly away home.

The movie ends with Rey and company putting the two halves of the map together. (The first half was in that damned R2 Unit, go fig.) She flies out with Chewie, who is now *her* copilot in the Falcon, to find the mystery man, and learn more about these force sensitive feelings she's been having. The movie ends as she walks up to him on his abandoned planet, and hands him his long missing lightsaber.

What happens now? We'll find out when Star Wars: The Last Jedi arrives in theaters on Friday, Dec. 15, 2017.