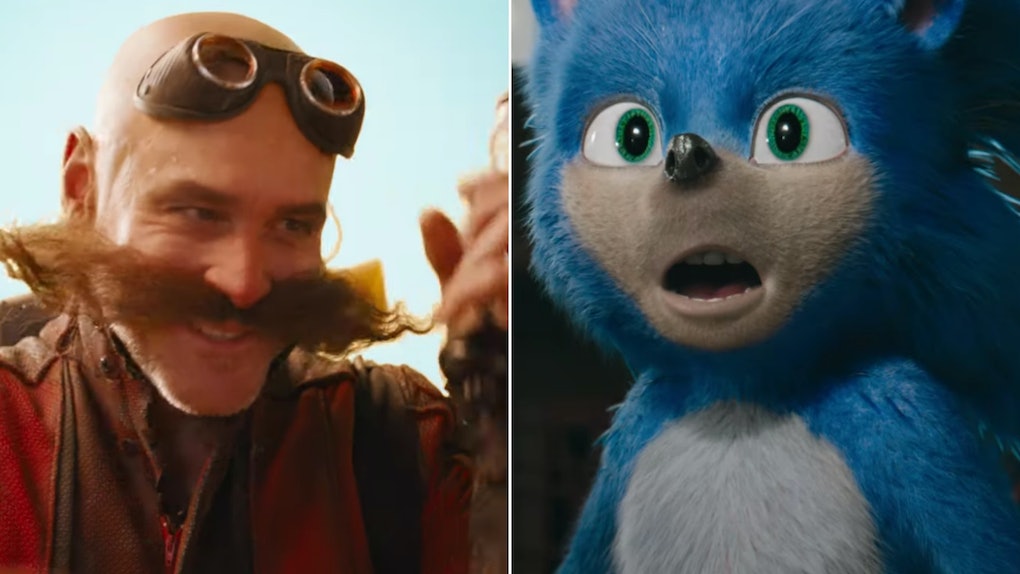 Ever since the Sonic the Hedgehog live-action movie adaptation was announced, video game fans have been incredibly curious about how all of the iconic characters would look. And thanks to the first full-length trailer that just dropped, now we know. The first Sonic the Hedgehog movie trailer is here, and it shows fans the CGI model for Sonic in action as well as Jim Carrey as the villainous Dr. Robotnik.

The new Sonic the Hedgehog introduces an unexpected militaristic plot for the iconic video game character in his big-screen debut. We see Sonic (voiced by Ben Schwartz) flaunting his famous super-speed on a rural highway as nearby police sheriff Tom Wachowski (played by James Marsden) clocks the blue blur at 760 miles per hour. But the intense speed ends up causing a major blackout that catches the attention of the United States government — yes, there is a scene in the war room of the Pentagon in the Sonic the Hedgehog movie. To deal with the mysterious power outage, the government sends in tech expert Dr. Robotnik, and the great battle that has spanned over 25 years of video game history begins again.

New clips show Jim Carrey wearing all-black, with slicked-back hair and a curled mustache as he asserts his position of power over an army officer. We also get a taste of all of the robotic creations that Robotnik will send after Sonic and his new human ally Tom Wachowski. The final seconds of the trailer show Carrey in a much more iconic Robotnik look, complete with a bald head and a bushy red mustache. Check out the full trailer for yourself below:

So far, Sonic and Dr. Robotnik are the only two characters from the Sonic video game franchise that are confirmed to appear in this new movie, but there is always the possibility that more characters could be introduced later. In particular, Sonic's constant sidekicks Tails and Knuckles have not yet been mentioned at all by the upcoming movie, so we will just have to wait to see if the movie wants to keep Sonic as the only CGI model character in a world of humans or the studio is just waiting to introduce the CGI versions of Tails and/or Knuckles later on.

The lifelike CGI animation style of Sonic the Hedgehog is being widely compared to the upcoming Detective Pikachu movie among fans. Both movies will serve as the live-action big-screen debut of beloved video game franchises, and both movies are also tasked with setting a realistic, talking animal among a world of humans. Similarly to how Detective Pikachu brought its star to life, Sonic the Hedgehog opted to cover the title character in realistic, blue fur. And as the trailer shows, Sonic's fur seems like it will actually play a major part in the movie, as both Tom Wachowski and Dr. Robotnic find the blue hairs that surge with electricity.

Watch out for Sonic the Hedgehog to rush into movie theaters at the end of the year on Nov. 8.