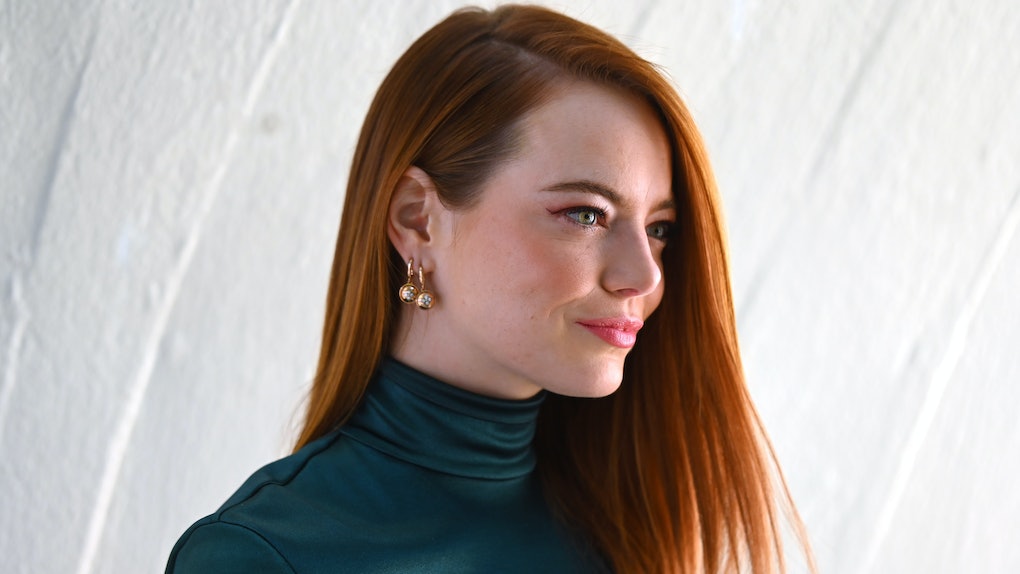 Disney is shedding some light on what viewers can expect when its latest live-action reboot of the animated classic 101 Dalmatians hits theaters on May 28, 2021. During the D23 Expo in Anaheim, California on Saturday, Aug. 24, the studio gave attendees a sneak peek at the movie's fur-loving villain, and the first photo of Emma Stone as Cruella de Vil for Disney’s Cruella shows that she's definitely switching things up style-wise compared to her earlier counterparts in the 1961 and 1996 101 Dalmatians films. While Stone can still be seen sporting her trademark white and black hair, she's taken a decidedly punk rock turn with its styling and the rest of her ensemble. Here's what we know about the film so far.

If you haven't been following along, the studio first announced that it would be bringing the fashion-loving villain back to life back in 2013. While Disney has been busy rebooting almost all of its beloved '90s classics, recently releasing live-action remakes of The Lion King, Dumbo, The Jungle Book, and Aladdin, this particular announcement was surprising considering that the studio has technically already given 101 Dalmatians a live-action facelift. You might remember that, 35 years after the original 1961 animated movie first enchanted viewers, a 1996 live-action 101 Dalmatians (which starred Glenn Close as the black and white-loving evil-doer) hit theaters.

So, when I heard that Disney was planning to remake the story yet again, I was naturally pretty skeptical. However, since then, more details have slowly started to emerge, including the fact that the studio will take a cue from its successful 2014 adaptation Maleficent, which gave viewers a look at Angelina Jolie as a younger version of the Sleeping Beauty villain and her backstory of how she came to be that way.

During the D23 Expo, Disney Film chief Sean Bailey and director Craig Gillespie confirmed that the new Cruella will be an origin story and it'll show another side of "one of Disney’s so-called great villains," according to Entertainment Weekly. They also revealed that the film will be set in 1970s London, and that it'll feature "punk rock" elements. Emma Thompson was also to be co-starring in the film opposite Stone, although the studio did not reveal which character she would be playing.

Shortly after unveiling a first look at Stone in character at the event, Disney took to its Twitter account to gift followers a still from the film. In the image, the La La Land actress can be seen sporting Cruella de Vil's signature black-and-white strands in curly locks as well as a black punk rock-themed jacket as she holds three Dalmatians by the leash. Her two cronies, who are played by Joel Fry and Paul Walter Hauser, can be seen in the background.

There's still a few years to go until the new Cruella hits theaters after it was pushed back from its original Christmas 2020 release date, but I'm curious to see how the studio will try to pull off humanizing a puppy-hating villain with this origin story and what additional hijinks will ensue when the film is released in 2021.