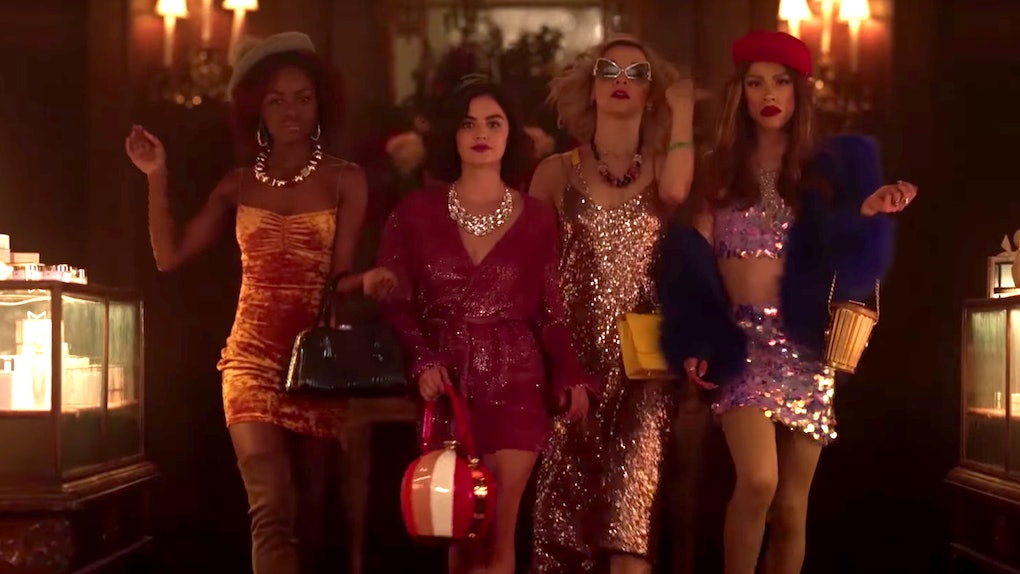 The Riverdale world is officially making the move from the small town to the big city. At the beginning of 2019, the CW ordered a pilot for Katy Keene, the second spinoff of its hit teen series Riverdale along with Netflix's Chilling Adventures of Sabrina, and now the network has confirmed that the show will make it to series, premiering this fall. And to excite fans even more, the CW just dropped the first Katy Keene teaser trailer to give us our first look at the stylish, New York City-based spinoff series.

Much like Riverdale revolves around Archie, Betty, Veronica, and Jughead as its four main leads, the new Katy Keene teaser introduces the four characters that will be at the center of the upcoming series: Katy, Josie, Jorge, and Pepper. The four friends are all creatives struggling to make it big in New York City, and the teaser briefly introduces each of them. Katy Keene (played by Lucy Hale) is an aspiring fashion designer, Josie McCoy (Ashleigh Murray) was already introduced to fans as a recurring character in Riverdale and will now be chasing her dreams of becoming a singer/songwriter even more, Jorge Lopez is a performer who wants to make it on Broadway and the teaser also introduces his drag persona Ginger, and Pepper Smith (Julia Chan) is an "it girl" with a mysterious past.

Although the Katy Keene teaser is very short, it does tease a very vibrant and colorful alternative to the dark and moody tone of Riverdale — something more along the lines of Gossip Girl rather than Pretty Little Liars, seemingly. Check out the first look at Katy Keene for yourself below:

While Katy Keene is being hailed as a Riverdale spinoff, fans should not expect any major crossovers between the two shows. That is because both series will be set in two different time periods: Riverdale showed Josie McCoy when she was still a high school student, but Katy Keene will see Josie as a twenty-something after having moved to New York City. Basically, Katy Keene takes place about five to ten years after the events currently being shown on Riverdale.

That said, fans may still see some Riverdale fan favorite show up as older versions of themselves in future episodes of Katy Keene. Showrunner Roberto Aguirre-Sacasa recently tole TheWrap that it is more likely fans will see Riverdale characters in Katy Keene than the other way around.

I think it’s more likely that we will see Riverdale characters pop up in New York five years later. We think that that might be a little more fun, and less confusing, than Josie going back in time to visit Riverdale.

Then again, a cameo set five years in the future could also be a major potential spoiler for Riverdale moving forward. Since the show is so full of murder and everyone is constantly at risk of being killed, fans would know that any character with a cameo on Katy Keene would be guaranteed to survive for the next several seasons of Riverdale. The Archie-verse is certainly becoming a more confusing place with each new spinoff!