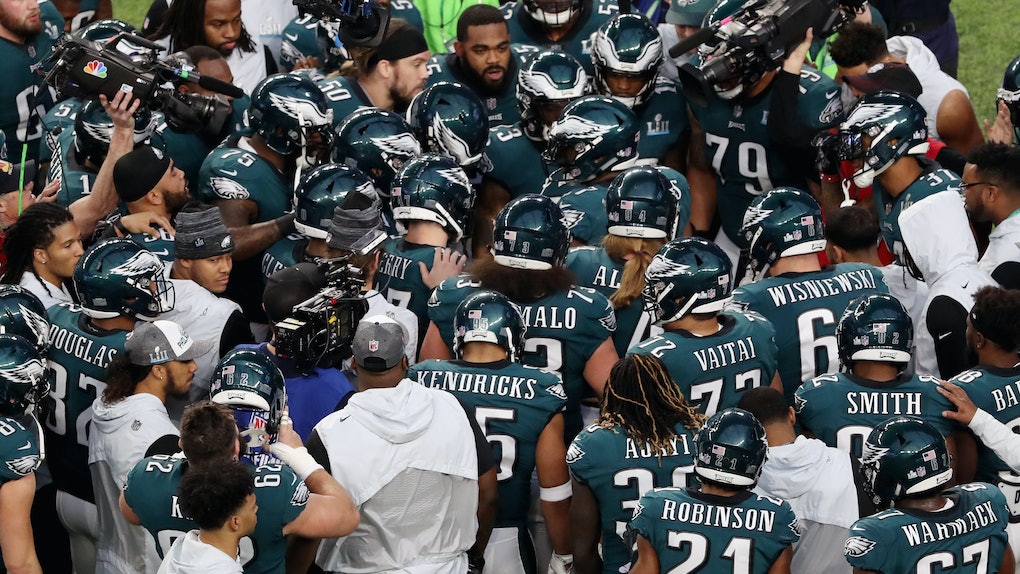 If you needed more hype about the 2018 Super Bowl, this should have you covered. The Eagles' walkout song at the Super Bowl is a perfect pick to get you ready to rumble for sports' biggest night. If you didn't recognize it — or couldn't hear it over the sound of the cheers (or the crunching corn chips, I don't judge) — the Philadelphia team chose to make their grand entrance to Meek Mill's 2012 song "Dreams and Nightmares," off his album of the same name, and I'm into it.

It wasn't unexpected that the team would pick the song, but man, was it kind of a perfect pick. Mill is a native of Philadelphia, and the song has become the team's sort of unofficial anthem, as NFL.com points out. The team has used the song for their public celebrations — including mini dance parties on the field and in meeting rooms before and after the victories that led them to the Super Bowl. In the days before the game, defensive end Brandon Graham said that the team would make its entrance to the Mill song. "If you're going to go with a Philly song, that's the one you're going with," he told the sports site. "It gives us good energy. Just a little extra juice."

The fact that Mill is currently locked up, serving two to four years in state prison under a controversial sentence for probation violations, is lending some extra weight to the choice by the underdog team.

"Meek, you know, he's locked up right now," defensive end Derek Barnett told NFL.com. "So we have to hold the city down for him."

A lot of fans were into it.

On social media, fans were cheering the pick — and getting hyped for the game that was about to start. Fans were ready for their team to bring it.

For a lot of people, it was even better after being compared to the Patriots' pick.

The New England team chose to enter the field to the sounds of Ozzy Osborne's "Crazy Train," which was released in 1980.

People were, uh, a little less enthused by that one.

Or maybe it was just that people were less enthused about the Patriots in general.

When the New England team hit the field, the crowd audibly booed, nearly drowning out the sound of the walkout music anyway.

Honestly, that wasn't unexpected either.

The Patriots might be the favorite to win, but there are plenty of people who are pretty unhappy about it. According to a 2017 poll, the team is the second most hated in the league, with 26 percent of fans saying that they hated the Pats. (The only team that was more unpopular was the Dallas Cowboys, who had 31 percent of fans saying that they were the worst.) So there are clearly plenty of people who would be cheering the Philadelphia team for the sole reason that they're not the Patriots. The team is pretty unpopular because of little things, like, you know, constantly winning — they've won five Super Bowls in the past 17 years — as well as their involvement in major scandals like Deflategate.

On the other hand, 16 percent of fans said the Pats were their favorite, so, hey. One fan's trash is another fan's treasure, I guess. *shrug emoji*

And now, their taste in music is adding another wrinkle in the whole thing. Are you more of an 1980s shock-metal fan? Or more of a 2010s rap aficionado? Or do you just desperately need to find something about the Super Bowl that you know enough about to comment on? Music is what brings us all together, after all. Music and football.

More like this
Billie Eilish's Reaction To Her Sexy 'Vogue' Cover Breaking Instagram Records Was Surprising
By Brandy Robidoux
TXT's 'The Chaos Chapter: FREEZE': Release Date, Tracklist, Music Videos & More Details
By Michele Mendez
Will BTS' Performance At The 2021 BBMAs Be Virtual Or Live? Here Are The Odds
By Noelle Devoe
Stay up to date