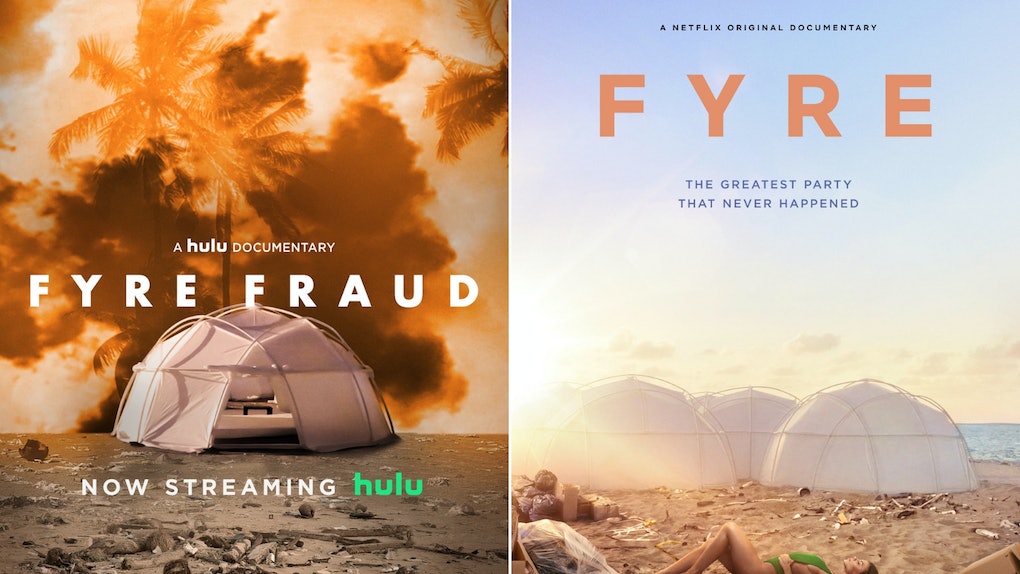 Back in April of 2017, everyone was glued to Twitter for a couple of days while we all watched the beautiful disaster of Fyre Festival unfold before our very eyes. Now, the trainwreck is back on display and more explosive than ever in not one, but two new documentaries about how the buzzy music festival became one of the most shockingly public failures ever. The question now is, which documentary should you watch: Hulu's or Netflix's? To help you decide, here are the differences between Netflix's Fyre and Hulu's Fyre Fraud.

Do you want background information?

One of the most notable differences between the two documentaries is how much time they each spend on explaining who Fyre Media founder Billy McFarland is and how he got to the point of launching Fyre Festival. Of course, both documentaries delve deep into the months of disastrous planning that went into the big festival, but only Hulu's Fyre Fraud documentary goes even further back to provide a full background on how McFarland got his start in entrepreneurial scamming. The Hulu doc goes into full detail about McFarland's first venture Magnises, exposing the numerous counts of fraud, scandal, and cover-up in that company that foreshadow his execution of Fyre Festival. Also, Fyre Fraud includes a sit-down interview with McFarland.

Basically, if you want the full story on Billy McFarland, you should watch Hulu's Fyre Fraud. If you just want to jump right into the Fyre Festival stuff, then Netflix's Fyre gets right to the point.

Do you want the best footage from the island?

While Hulu's Fyre Fraud focuses largely on Billy McFarland and the other people that helped to plan Fyre Festival, Netflix's Fyre offers insight from natives of Great Exuma, The Bahamas, who were supposed to work the major festival. Fyre interviews local caterers who lost out on tons of money because of how the event was mishandled, as well as local workers who saw the writing on the wall about the epic failure before it happened. The doc also notably features a lot more footage of the set-up on the island, including McFarland and Ja Rule's visits to the site.

So, if you are interested in getting the story of the Bahamian workers that were duped by Fyre Festival, then Netflix's Fyre is the way to go. Stick with Hulu's Fyre Fraud if you would rather have an in-depth look at the people planning the festival rather than the people affected by it.

Do you want the full story or outrageous stories?

This is probably the most important question to ask yourself when deciding on which Fyre Festival documentary to watch. Hulu's Fyre Fraud definitely offers a more detailed look into how Fyre Festival became such a colossal disaster, but Netflix's Fyre offers the wildest stories about the mis-planning of the event.

One important thing to note is that Netflix's Fyre is produced by Jerry Media, the social media team behind popular Instagram account F*ckJerry and a partner in helping to advertise Fyre Festival in the first place. Hulu's Fyre Fraud includes testimony from a former F*ckJerry employee who points out the brand's complicity in advertising on an event they suspected was a scam, and even calls out Netflix's Fyre for covering this aspect of the event up. As this suggests, Hulu's documentary provides a much more far-reaching and in-depth exploration of the various forces behind Fyre Festival, whereas Netflix's doc pins the blame pretty much solely on Billy McFarland.

But in exchange for the lack of nuance, Netflix's Fyre definitely delivers the most shocking, gasp-inducing stories from behind the scenes of the Fyre Festival planning. The wildest of the bunch comes when one of the planners admits that he was about to perform a sexual act on a delivery man in order to secure a delivery of bottled waters that the festival would not afford. So, yeah — if you're looking for the wildest stories, then Fyre is for you.

In the end, both documentaries have their own specific strengths and weaknesses, so viewing them both is the best way to get the full story on Fyre Festival.