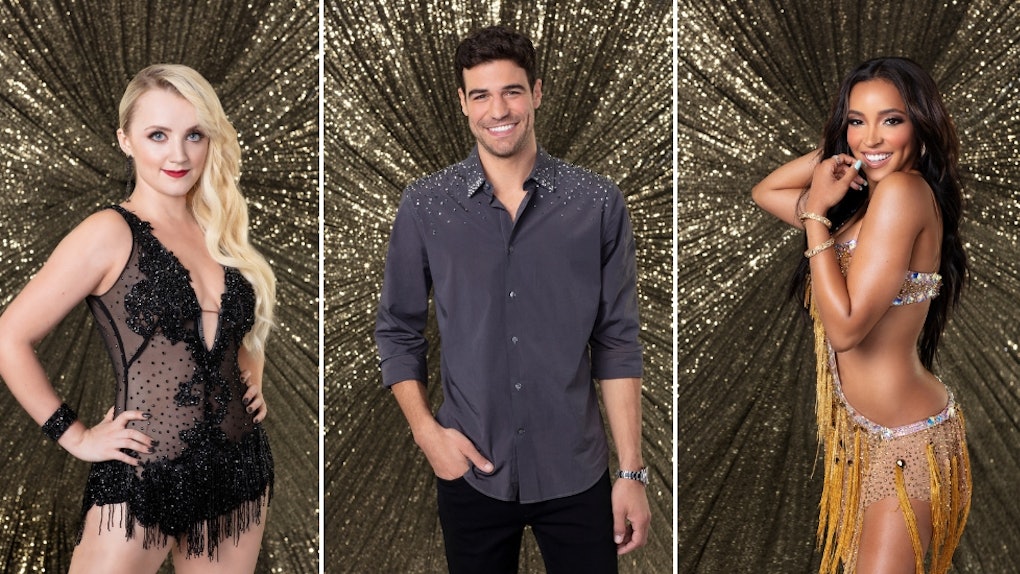 The new cast of celebs is packed with Hollywood talent, ranging from Bachelorette fan favorites, to pop stars on the rise, to a beloved Harry Potter star. It is a notable shift from the more obviously athletic recent spring season of Dancing with the Stars, which exclusively featured famous athletes and ended with superstar Olympic figure skater Adam Rippon going home with the Mirror Ball. This time around, viewers will see less athletes and a lot more actors, singers, and public personalities take to the stage to show off their moves. Check out the full cast list below:

Where you recognize him from: You probably know Joe Amabile better as Grocery Store Joe. The grocery store owner immediately stole fans' hearts in the premiere of Becca Kufrin's season of The Bachelorette, but got sent packing in the first week. He stayed around much longer in the recent season of Bachelor in Paradise, however.

Where you recognize him from: One of the preeminent voices in the country music scene, Bobby Bones hosts the syndicated radio show The Bobby Bones Show.

Where you recognize him from: Juan Pablo Di Pace has been a working actor for over a decade, but got his big break recently by playing Kimmy Gibbler's estranged husband Fernando on the Netflix revival series Fuller House.

Where you recognize her from: One of the buzziest rising stars in stand-up comedy, Nikki Glaser is a perennial guest on Comedy Central's celebrity roasts, and also hosts a daily SiriusXM radio show called You Up? With Nikki Glaser.

Where you recognize her from: Evanna Lynch is best known for playing the quirky wizarding student Luna Lovegood in the Harry Potter movies. She is also an activist to bring awareness to eating disorders and veganism.

Where you recognize him from: The youngest contestant to compete on this season, Milo Manheim is the son of Emmy-winning actress Camryn Manheim. He recently starred in the 2018 Disney Channel movie Zombies.

Where you recognize her from: Nancy McKeon has starred in a number of TV movies and shows, but she is best known for playing the Facts of Life bad girl Jo Polniaczek.

Where you recognize her from: Alexis Ren is one of the buzziest models and social media stars of the moment. She graced Maxim's cover last year and the Sports Illustrated swimsuit edition this year, and boasts millions of followers on Twitter and Instagram.

Where you recognize her from: Credited as one of the pioneers of American women's gymnastics, Mary Lou Retton became the first American woman to ever win gold in the Olympics all-around competition at the 1984 summer games. She retired two years later, but remains an Olympic icon.

Where you recognize him from: Throughout the early '80s, John Schneider starred as Bo Duke in the Dukes of Hazzard television series. Superhero fans may also recognize him as Clark Kent's father in Smallville. Schneider has also topped the country music charts several time throughout his nine-album music career.

Where you recognize her from: Tinashe got her start as an actress, but her big break came when she transitioned into music. She was ubiquitous on the radio when she released her 2014 debut single "2 On," and has continued to put out R&B-infused pop hits since.

Where you recognize her from: Danelle Umstead is a Paralympic champion skier, who took home bronze medals at the 2010, 2014, and 2018 Winter Paralympics. She has a genetic eye condition called retinitis pigmentosa that caused her to lose her eyesight.

Where you recognize him from: DeMarcus Ware was a linebacker for Dallas Cowboys from 2005 to 2013, and then played three seasons for the Denver Broncos, with whom he won the 2016 Super Bowl. He officially retired from the NFL last year.

Dancing with the Stars Season 27 will premiere on ABC on Monday, Sept. 24.

More like this
10 Quotes From Netflix's 'Enola Holmes' That Are So Freaking Relevant
By Rachel Varina
What Would An LGBTQ+ 'Bachelor' Season Look Like?
By Abby Monteil
5 Facts About Courtney From 'The Circle' Season 2
By Dylan Kickham
Stay up to date