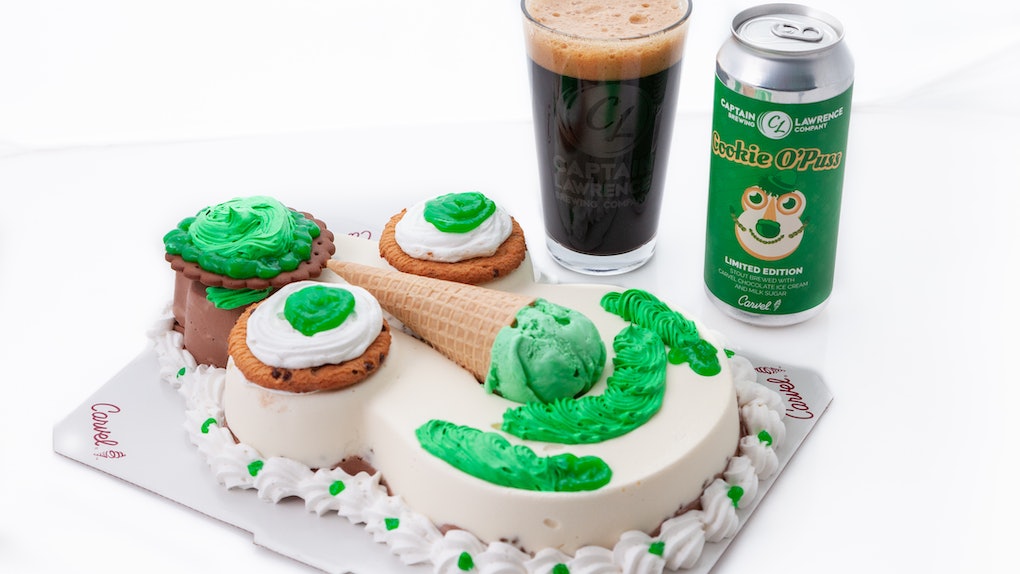 Every St. Patrick's Day, I usually find myself sitting around the bar at the local pub with all of my friends. However, this year might be a little bit different — because the Cookie O'Puss Pastry Stout by Carvel and Captain Lawrence Brewing is on its way. That's right: The new ice cream cake-inspired beer will be hitting the shelves in time for St. Patty's Day, which means I'll probably be hanging out at home on March 17 with a can in my hand. If you're a fan of dessert and beer (which, c'mon, why wouldn't you be?), then you're probably just as excited as I am. Just wait until you read more details about the limited-edition brew.

Before I get into depth about the upcoming beer, let's take a stroll down memory lane. Back in May 2018, Carvel and Captain Lawrence Brewing partnered up and created Fudgie the Beer, a chocolatey stout inspired by Carvel's iconic Fudgie the Whale dessert. Fast forward to 2019, and the companies are back at it again with not one — but two — brand new beers. The new selections include the Cookie O'Puss Pastry Stout (as I previously mentioned), and the Cookie Puss Milkshake IPA. Both of them were derived from Carvel's beloved Cookie Puss ice cream cake — and each one of them sounds freaking delicious.

Since St. Patrick's Day is right around the corner, I'll start with the Cookie O'Puss Pastry Stout (8 percent ABV). According to Carvel and Captain Lawrence Brewing's press release, the festive beer was literally brewed with Carvel's chocolate crunchies (you know, the ones that you can find in the center of your ice cream cakes). Apparently, it also features notes of "cacao and roasted undertones," which makes it a "chocolate lover's dream," per the release. I'll cheers to that.

Now, let's talk about the Cookie Puss Milkshake IPA (7.5 percent ABV), which was unveiled to honor Carvel's 85th birthday. This celebratory IPA was actually brewed with Carvel's iconic vanilla ice cream (YUM), resulting in a rich beer that features a "full-body taste and texture." As someone who worked at Carvel for years during high school (no joke), I can appreciate a good brew that's infused with soft serve vanilla.

Scott Vaccaro, Founder of Captain Lawrence Brewing, talked about the beer collab in a press release. He said,

Our collaboration with Carvel is something that we are having a lot of fun with — it’s also something that we take seriously as brewers. We’ve seen a number of other well-known brands launch beer collaborations since our inaugural partnership, and this year’s will be that much sweeter. Our goal has been to create quality beers that our fans will enjoy, while also ensuring we express the character of both Captain Lawrence and the Carvel cakes that inspire these new brews.

If you're eager to try the new brews, you'll be happy to hear that both beers will hit the shelves on Feb. 26. The Cookie O'Puss Pastry Stout will be available at retailers across the east coast that sell Captain Lawrence beer (you can find your closest location here) — but the Cookie Puss Milkshake IPA will only be sold in New York state for the time being. Each four-pack costs $18, and you must be 21 years old to purchase them.

Those of you who live near Captain Lawrence Brewing in Elmsford, New York can pre-order the brews and pick them up from the brewery on Feb. 27 — but everyone else will have to search the shelves at their local stores for the limited-time beers. Hopefully, you can grab a few Cookie O'Puss Pastry Stout cans in time for St. Patty's Day.