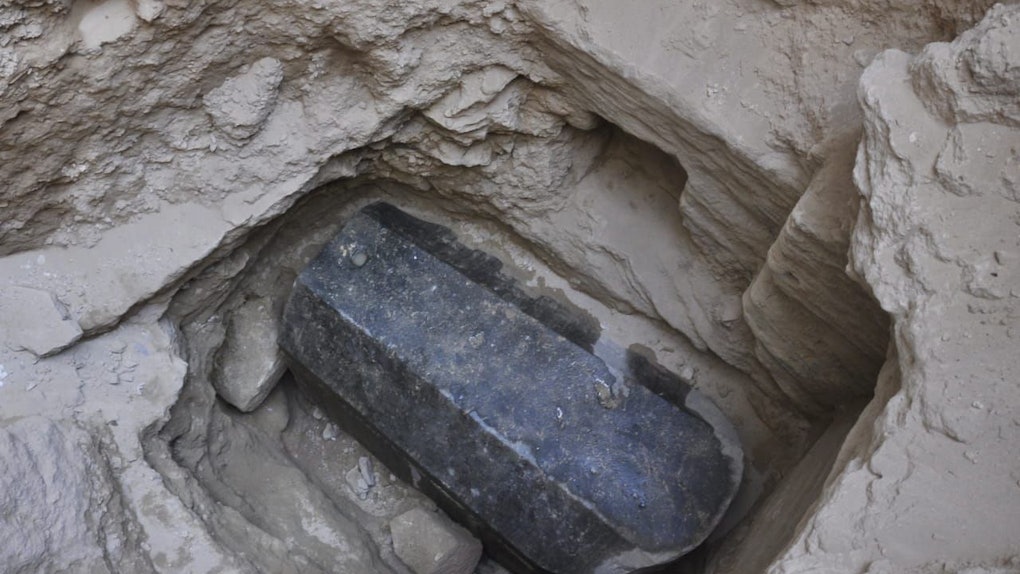 I have to admit: I'm a total sucker for scary stories, but today's news about a mysterious coffin being opened in Egypt sent a chill down my spine. Oh, you didn't hear? A black sarcophagus found in Egypt was finally opened, and you'll scream when I tell you what was inside of it. Turn your lights on, take a seat, and get ready for a discovery that'll keep you up at night.

To recap, an ancient sarcophagus dating back to the Ptolemaic period was discovered in Alexandria, Egypt on July 1, according to a tweet by the Ministry of Antiquities. The Supreme Council of Antiquities made the harrowing discovery during an Egyptian archaeological mission while inspecting a building site for an Alexandrian inhabitant, per the Ministry's Facebook. Apparently, the sarcophagus was buried 5 meters into the ground and is now considered the largest coffin to be discovered in Alexandria. To make matters creepier, archaeologists also found an alabaster head beside the coffin, which they believe belongs to the owner of the tomb.

Apparently, some people thought Alexander the Great was inside the sarcophagus, while others feared it would unleash a curse if it was opened. According to a Facebook post by the Ministry of Antiquities, the coffin hadn't been opened since the day it was officially closed, due to a layer of mortar that was present between the lid and the sarcophagus. With that being said, no one knew the truth about what the coffin held until its contents were revealed.

After remaining closed for weeks following the discovery, archaeologists finally opened the mysterious sarcophagus on July 19, per the Ministry's Facebook. Unfortunately, Alexander the Great was not found inside the tomb — and I'm hoping no curses were released upon opening it (I can't give you a definite answer on that, though).

Instead, archaeologists found three skeletons and sewage water inside of the coffin. Shaaban Abdul — an expert who specializes in mummies and skeletons, according to the Ministry's Facebook — said that the skeletons probably belong to officers or military soldiers. One of them reportedly has a wound that was caused by an arrow hit, per The Independent. Yikes.

So, where did the water come from? Apparently, it was sewage that leaked through the grove in the area where the sarcophagus was found. There's even a possibility that the water made the mummies decompose, resulting in the skeletons that were left behind.

By now, you're probably super creeped out (I'm sorry). Still, you should know that the historic findings are being sent to Alexandria's National Restoration Museum to be studied. There, cause of death of the skeleton's will be analyzed, along with information about their historical era. The coffin, on the other hand, will be lifted after its initial restoration, per the Ministry's Facebook.

So, there you have it. The mysterious black sarcophagus discovered in Egypt was finally opened, and skeletons were found inside of it. If that didn't add some creepiness to your work day, then I don't know what will.

To discover more ancient mysteries found in the depths of Egypt, go ahead and follow the Ministry of Antiquities' Facebook page. Who knows what archeologists will dig up next.