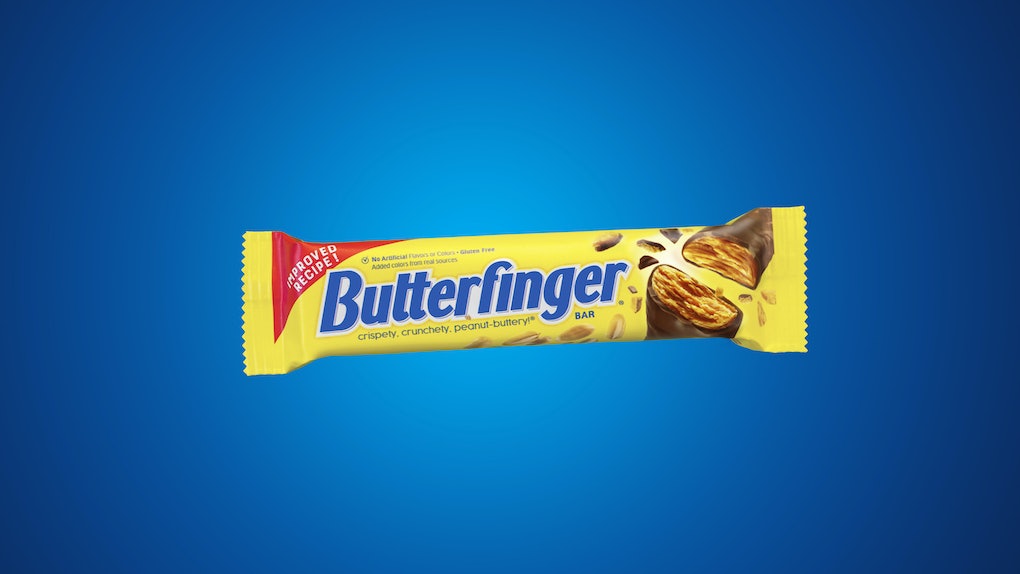 Fact: One of my favorite chocolate bars has always been the Butterfinger. Between its chocolatey coating and crispy peanut butter-flavored layers, it's nearly irresistible in my book. With that being said, I never thought it needed a flavor upgrade — but I suppose I was wrong. Why is that, you ask? Well, the "better" Butterfinger candy bar is here with a brand new recipe — and I can't even imagine how delicious it is. TBH, I didn't think there was anything wrong with the old Butterfinger — so I'm obviously excited to see how it tastes with an "improved" recipe. Are my taste buds prepared? I don't think so.

According to a Butterfinger press release from Monday, Feb. 11, the latest recipe features an upgraded chocolate coating and "carefully-selected U.S. grown peanuts." Between those two factors alone, I can't even imagine how delectable the candy bar tastes. That's not it, though. Kristen Mandel, Ferrara Marketing Senior Director, tells Elite Daily via email that the new recipe doesn't include TBHQ or hydrogenated oils anymore. Plus, the candy bar's flavors are gluten free and do not include artificial colors.

Believe it or not, its recipe isn't the only new asset of the treat. According to Butterfinger's press release, the candy's packaging even got an improvement. That's right: The new packaging features a double-layered material to ensure that your chocolate bar is fresh AF.

A new recipe and new packaging? What did candy-loving humanity do to deserve such a delicacy?

Now, you're probably wondering why Butterfinger changed its recipe to begin with. According to Business Insider, Ferrara Candy Company (home to your chocolatey go-to's like Nutella, Ferrero Rocher, and Kinder Joy) acquired Butterfinger in 2018. That, my friends, resulted in the candy's upgrade.

TBH, it was the upgrade that I never knew I needed.

If you're hoping to give the "better" Butterfinger a try, you're in luck. According to Butterfinger's press release, the new candy bars are currently available across the country. With that being said, you should be able to head to your local grocery store and buy one (or however many as you want). If you're a tried-and-true Butterfinger fan, maybe you'll be able to determine whether or not it's better than the OG Butterfinger bars that you grew up snacking on.

If you need more convincing before you hop into your car in pursuit of the new chocolate bar, check out the new ad for the better Butterfinger. Apparently, it's the first commercial for the candy under ownership of Ferrara Candy Company, and it does not disappoint.

In fact, the ad even includes the iconic catchphrase that you know and love: "Nobody lays a finger on my Butterfinger."

As you can see, the beginning of the ad talks about the candy bar's recipe. Then, the commercial cuts to a scene where an alien being examined hops into a car and sets off for their own Butterfinger. When they finally see the candy bar, they make it levitate toward them. After that, they drive away with the "better" Butterfinger.

If that doesn't make you want to try the new and improved recipe, I don't know what will.