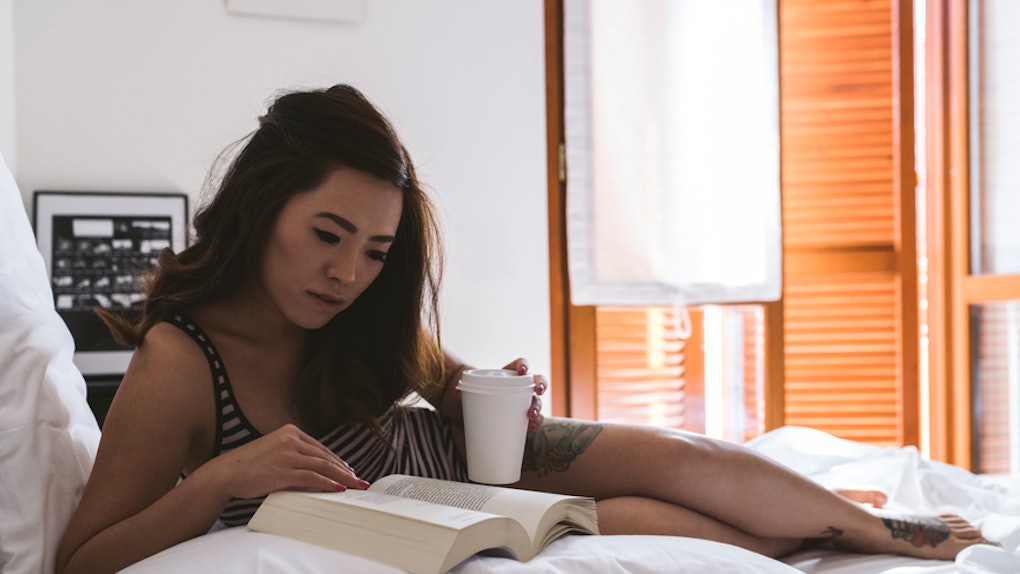 Is there anything more lovely than getting totally lost in a book? If you ask me, there's no better way of passing the time. And if you're already feeling like 2018 is off to a rocky start, just imagine how fried your brain might feel by the time spring break rolls around. Your noggin just might need a vacation, too, so the best books to read on spring break are going to be the ones that get you out of this world, this timeline, and this news cycle. No need to pack any three-volume political memoirs in your suitcase for this vacation, OK?

Whether you're a fan of love stories, magic, ghost stories, sci-fi, or — my personal favorite — coming-of-age stories, I've rounded up some suggestions for great books that will transport you out of this wild world and into another. Because we all need a sweet escape from time to time, amirite? At least for a little while?

Regardless of where you're going this year for spring break, it never hurts to have a good book (or two, or five) stowed away in your suitcase. And hey, even if you're simply planning for a staycation this year, that means you have even more time to get lost in any one of these satisfying reads.

1. A Wizard Of Earthsea By Ursula K. Le Guin

If you haven't heard of Ursula K. Le Guin, you're about to have your mind blown. The otherworldly sci-fi novelist unfortunately passed away in her home in Portland, Oregon, on Monday, Jan. 22. But, we are left behind with an incredible life's work, not the least of which is the coming-of-age fantasy novel A Wizard of Earthsea, about a young mage called Ged, and the trouble that comes along with his great powers.

2. Call Me By Your Name By André Acimen

Yes, the critically acclaimed movie that is getting some serious Oscar nomination buzz is actually based on a novel: a beautiful, romantic, truly awe-inspiring piece of literature. If this book hits you the way it hit me, you'll be weeping like a baby by the end.

A coming-of-age novel by the queen of cool and Suicide Blonde writer Darcey Steinke, this book transports you to summer in the 1970s, as a young girl makes her awkward and beautiful way toward adulthood in Roanoke, Virginia.

You want to get totally carried into another world? Start the Patternist series by the truest of sci-fi masters, Octavia Butler. Patternmaster was the first in the series to be published, but technically, it's the last novel in the book's internal timeline and chronology. You decide from which end you want to start, but all you need to know is that Patternmaster drops you in a distant future, with a very divided human race.

A kind of reimagining of Snow White, this book is as fantastical and thought-provoking as it is beautifully written. Prepare to enter a kind of half-myth, half-all-too-true reality of race, family, conditional love, and the pains of finding your own identity. Oyeyemi's writing is truly one of a kind.

6. The House Of The Spirits By Isabel Allende

An epic family saga filled with love, sex, tragedy, and oh-so-many ghosts, set in an unnamed Latin American country where spirits roam and the political climate is continuously in upheaval. Allende is often considered a magical realist, but nevertheless, she's always an incredible storyteller.

This novel tells the story of a young girl living and growing up in a Scottish town haunted by two female ghosts after her mother dies. Margot Livesey shoots you into another realm that feels so rich and so deep that you begin to question where the lines of reality are really drawn.

8. A Separation By Katie Kitamura

While this one is, indeed, a bit unsettling, I'm a sucker for a good story that takes place abroad. A Separation tells the story of a woman who goes to Greece to look for her husband, as he seems to have disappeared. It's a masterfully written, penetrating novel that enraptures you from start to finish. I personally read the whole thing in two sittings.

More like this
20 Spring Break 2021 Staycation Essentials To Bring The Beach To Your Home
By Kaitlin Cubria
Will BTS' Camping Collection Restock? Here's What To Know About The Helinox Collab
By Marisa Casciano
Away's Travel Accessories Collection Brings Comfort To You In Any Destination
By Marisa Casciano
Stay up to date