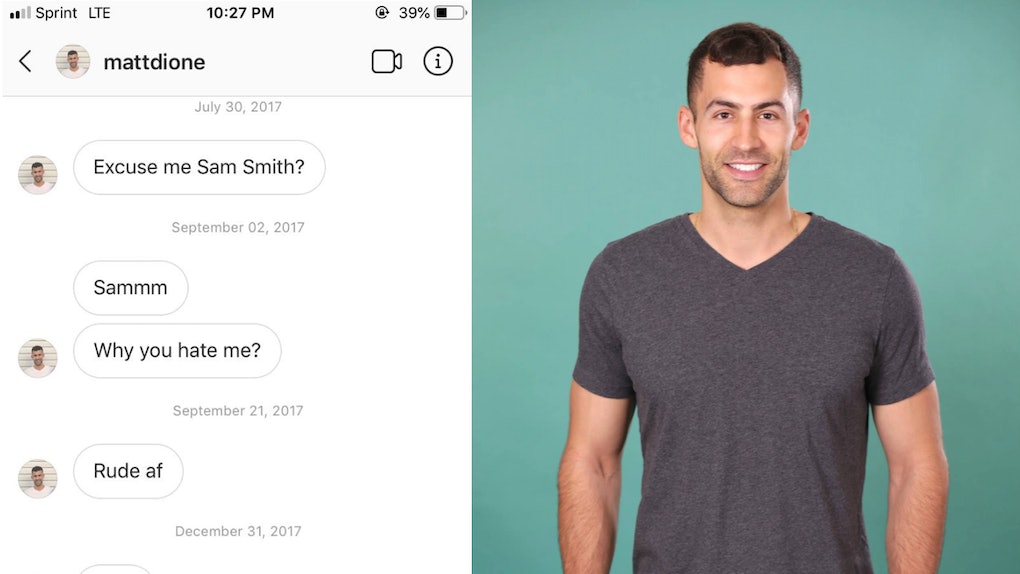 The new season of The Bachelorette hasn't even started yet and there's already drama. What sort of drama, you ask? Well, for starters, The Bachelorette contestant Matt Dione slid into Sam Smithburger's DMs for nearly two years. Smithburger, an Orlando, Florida-based Twitter user, has posted all of the screenshots on Twitter for the world to see.

It all started last week, when ABC introduced 33 dudes for Bachelorette Hannah Brown to potentially spend the rest of her life with. Smithburger recognized one of the contestants — as she explained on Twitter, Dione was a frequent flyer in her Instagram DMs for a long time. And she had no trouble calling him out publicly. "This guy used to dm me on insta consistently for like 2 years and now he’s a contestant on the new Bachelorette lmao," she wrote in a tweet that contained screenshots of the messages he sent her along with his headshot for The Bachelorette.

The first message, written on Jan. 22, 2017, simply writes "Sam what the heckkk." She doesn't respond and he continues to message her with messages including but not limited to "I'm not giving up to you," "Hey I'm still alive," and "Rude AF sam I expect better from you." Based on her screenshots, the messages go on from at least January 2017 through November 2018, concluding with one on Nov. 26, 2018 that seems to be a template for what he wished she would have sent him, "Sorry Matt, not interested anymore, I'm sure you're a nice guy but I can't take that risk. Have a good day!"

Read the messages for yourself here:

Elite Daily reached out to both Smithburger and Dione for comment and, while we did not hear back from Smithburger in time for publication, Dione did choose to engage in an Instagram DM conversation with an editor.

"We matched on Tinder and talked a bit, and then she ghosted me, which is annoying not to know what the heck happened, and then whenever she'd post a pic, I'd just get reminded and reach out again to see if she felt like ever explaining herself," he wrote. When an Elite Daily editor asked why he kept messaging her, despite her lack of a response, he added, "I don't know, I guess I'm just a horrible person?"

He also noted that, while the screenshots don't show it, their conversation initially started on Instagram. "Most girls say, 'Write to me on IG' instead [of Tinder], so I did, we had some back and forth and then she turned into a mime which left me wondering why," he explained.

When asked to provide screenshots of the messages she did respond to, he said he "probably" would have been able to but she blocked him on Sunday, March 17 — after Smithburger's tweet went viral — so their messages disappeared.

He also accused her of asking people to Venmo her after her post got retweeted, but Elite Daily was not able to confirm the allegation. "I'm just glad she was able to capitalize off this, and if it made her happy, then I'm just glad I could help her out!" he wrote to an Elite Daily editor.

As if things couldn't get any more awkward about this situation, a Twitter user named Victoria just responded to Smithburger's Instagram claiming she was dating Dione during part of the time he was sending these messages.

Dione did not respond to Elite Daily's request for comment on the allegation that he dated Twitter user Victoria Moheb during the time period that he was messaging Smithburger.

The Bachelorette's announcement of contestants this year was unprecedented. "For the first time ever, we are giving you an early look at the men who may be on #TheBachelorette," they wrote on Facebook along with pictures of the men. "Leave a 🌹 for who would get your first impression rose."

The operative word here? "May." In other words, Dione may not actually be on The Bachelorette after all. Only time will tell!