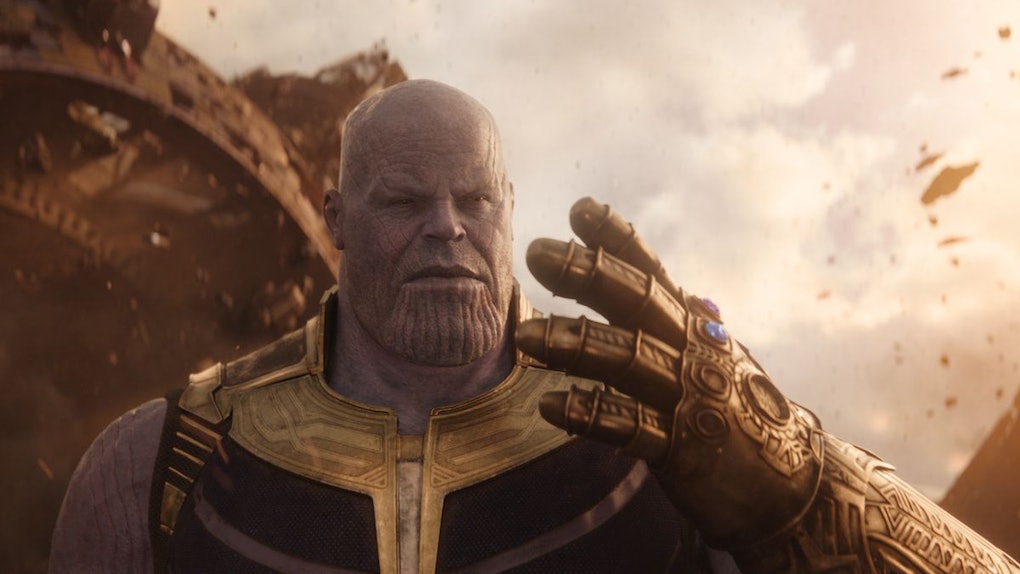 The 'Avengers: Infinity War' Writers Reveal How They Came Up With That Shocking End Scene

Avengers: Infinity War broke box office records the same way it broke hearts this past weekend. For fans of the series who watched their favorites become done and dusted, it felt like the writers of the series were deliberately trying to go for the jugular, and added insult to injury by making the conclusion a full year away. But in a new interview, the Avengers: Infinity War writers talk about that ending, and it turns out, they didn't realize how much of an emotional wallop they were packing until they saw the actors film it. By the way, spoilers for Avengers: Infinity War follow, in case you couldn't figure that out.

Talking to Buzzfeed, writer Christopher Markus said they always knew Thanos would win, and the finger snap would happen. After all, it's part of the comic book story the film is based on, 1991's six-part series, Infinity Gauntlet, but he didn't realize how affecting the result would be.

As you're writing these things, you have to be fairly calculating and cold. You know, I don't tear up every time I read it. But to see the characters fully rendered, and to see the actors’ faces processing that loss, it’s pretty profound. It really seemed to be a gut punch to people in a way that I didn't fully [realize].

As for who died, it was based on a combination of who they needed to Avengers 4, as well as going for a lot of characters who head up their own franchises in order to maximize the impact. As Markus' writing partner Stephen McFeely put it:

Some characters were better served in movie 2 after this event. We were making some choices based on some characters we knew were going to leave us at the end of the first movie, so they got highlighted in the first movie. And some who were going to be in the second movie more maybe got less attention or less screentime [in Infinity War] — I'm thinking of Cap and Natasha, specifically. It's about the story we wanted to tell in movie 2, mostly.

As for taking out T'Challa, who didn't have that much screen time, part of that was because Infinity War was shot and in the can before Black Panther was such an enormous hit. But McFeely says: "We would do it all over again."

We had to treat all these characters the same. People who leave us [in Infinity War] are the leads of their own franchises. And Black Panther’s no different.

Speaking of other franchises, there are some really interesting tidbits floating around in this interview. For instance, Markus and McFeely originally thought Chris Pratt's character Star-Lord would be too weak to pull the trigger when faced with Gamora's pleas after Thanos gets the Reality Stone. Both Pratt and Guardians director James Gunn insisted that be changed. The writer agreed, once they saw the results, this was the right choice.

Another hard choice: where the put the finger snap. There was apparently some talk of pulling the punch and having it happen at the beginning of Avengers 4 instead. But then they realized the result was a cheapened ending.

But the most interesting comes at the end, when the writers admit they know they killed off the leads of several films, which are probable if not guaranteed for Phase IV, including Spider-Man, Black Panther and everyone from Guardians except Rocket and Nebula. To them, they can't make movies assuming the audience knows what films have been green-lit and which haven't.

But just because fans know Gunn is already working on Guardians 3, or MCU head Kevin Feige has talked about Homecoming 2, or Black Panther's box office records making a sequel all but certain, fans shouldn't expect for Avengers 4 to just snap fingers a second time and fix everything. Markus warns:

[Avengers 4] doesn’t do what you think it does. It is a different movie than you think it is. Also…[the deaths are] real. I just want to tell you it’s real, and the sooner you accept that the sooner you will be able to move on to the next stage of grief.

What does that even mean? It's one thing for Vision, Gamora, Loki and Heimdall's deaths to be real. But everyone?

Fans will have a long wait until Avengers 4 arrives in theaters next year, on May 3, 2019.