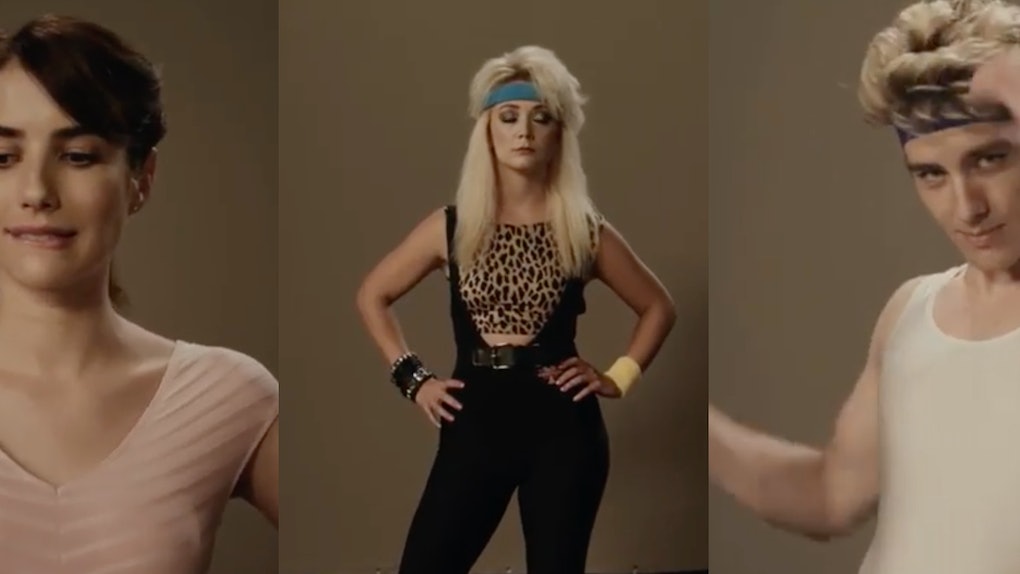 The 1980s were a scary time. There were no cell phones, no Postmates, and shoulder pads were really big. It's also the decade when some iconic slasher movies were released, like Friday the 13th, My Bloody Valentine, and A Nightmare on Elm Street. Now, Ryan Murphy is tapping into some of that 1980s horror, poor fashion choices and all. His latest installment of the anthology series American Horror Story is set in the decade, and fans were just treated to some more details about the new season. The American Horror Story: 1984 cast was finally revealed, and they're embodying the '80s perfectly.

In honor of the first day of shooting the season, Murphy took to Instagram to post the long-awaited reveal of his American Horror Story: 1984 cast, writing:

To celebrate the first day of filming the NINTH Season of AMERICAN HORROR STORY, here's the official 1984 cast announcement along with some amazing 80s lewks. Enjoy!

The video highlights the season's sleep-away camp setting by having the new cast use a bunk as a fashion show runway to show off all their totally '80s looks. There isn't much plot in the trailer, but fans can watch and learn a lot about the new characters.

The trailer shows off a few American Horror Story alums who are returning for this season. Emma Roberts, Cody Fern, and Billie Lourd all pose in their best '80s workout gear. The trailer also offers a quick peek at John Carroll Lynch, who starred as Twisty the Clown in American Horror Story Season 4. Based on his menacing appearance in the 1984 trailer, it looks like Lynch will probably be taking on another villainous role this time around.

Murphy is known for producing a vast and diverse body of work. Since he's made so many TV shows, there's bound to be some overlap in his casts. That's definitely the case with American Horror Story: 1984. The trailer shows former Glee star Matthew Morrison in a very '80s-esque mustache and short-shorts. Pose star Angelica Ross also makes an appearance, as does Leslie Grossman, a longtime favorite of Murphy's who starred in his very first TV show, Popular.

The cast is rounded out by Zach Villa (Destroyer), DeRon Horton (Dear White People), and Olympic gold medalist Gus Kenworthy. Murphy previously revealed that Kenworthy will be playing Roberts' character's boyfriend, but not a lot else is known about the character (or any of the characters, for that matter).

Notably missing from the cast reveal are two American Horror Story mainstays: Evan Peters and Sarah Paulson. Peters is skipping Season 9 altogether, and it's been confirmed that Paulson will not have a major role in American Horror Story: 1984. It's possible she might have a cameo appearance in the season, so fans can remain slightly hopeful. The good news is that the series has already been renewed for a Season 10, so the fan-favorite actress could return as a regular then.

More like this
'Shadow And Bone' Changes Alina's Story From The Books & It's So Much Better
By Ani Bundel
Why Won't NBC Air The Golden Globes In 2022? Let's Break Down The Drama
By Ani Bundel
'SNL's "Gen Z Hospital" Sketch Has Twitter Calling Out AAVE Appropriation
By Dylan Kickham
Stay up to date