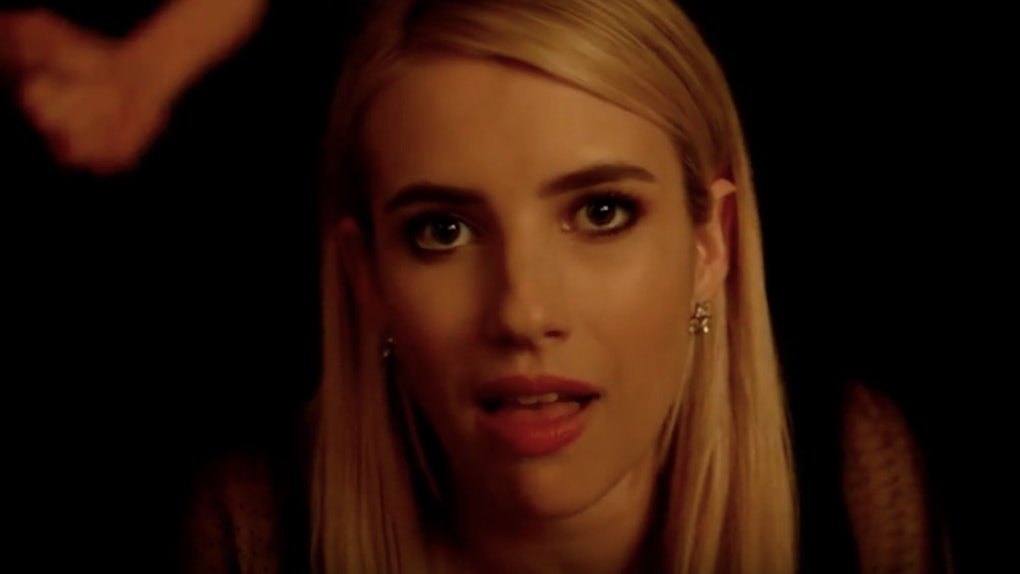 "It's the end of the world." Those are the ominous words uttered in the latest intriguing AHS: Apocalypse trailer. The teaser isn't just creepy, cryptic imagery depicting black heart fetuses, gas masks, and scorpions — it gives audiences a real glimpse at the highly anticipated Coven and Murder House crossover the season surrounds.

The clip offers a glimpse at Joan Collins (squeal!), Leslie Grossman, and Evan Peters' characters are all on a private plane that's about to crash. Their expressions are stunned and doom is clearly impending. The world is ending, but its destruction looks like it marks the merging of two American Horror Story narratives.

"Murder House. Coven. Collide.," the teaser reads. "Back with a vengeance."

Many familiar faces from the show's past are showcased throughout this trailer, so get ready for one heck of a scary reunion. There's a flash of the infamous Rubber Man and he's about to pounce on some poor unsuspecting people. Sarah Paulson, Taissa Farmiga, and Frances Conroy's Coven are seen strutting confidently at one point. Jessica Lange's Constance Langdon and Dylan McDermott's Ben Harmon also make return appearances. Cody Fern's adult version of Michael Langdon is given a disturbing moment as well. And how could we forget Emma Roberts' witchy Madison Montgomery?

"I bet you thought you've seen the last of me," she addresses the camera in the final moments of the eerie trailer. Does anyone else have chills?!

While Peters is slated to reprise his Tate role, he's also set to take on a new part as a "comedic" hairdresser who's the grandson of whoever Joan Collins is.

"Maybe it's time to eat somebody," Peters says in the clip. It looks like whatever transpires following that plane crash is probably not going to be very pleasant...

Despite the terrifying circumstances, it's nice to see of these recognizable players back on screen. Sarah Paulson will not only resurrect Coven's Cordelia, she's bringing back Murder House's Billie Dean Howard and a new character named Venable.

Joan Collins, Leslie Grossman, and Billie Lourd (who all get screen time in the trailer) help make up the fresh meat joining the already established cast. Lourd and Grossman both had memorable turns on last year's AHS: Cult. Billy Eichner, Kathy Bates, Lily Rabe, Adina Porter, and Cheyenne Jackson are also among the actors confirmed for the upcoming episodes. Oh — so is the iconic Stevie Nicks.

The "high concept" Apocalypse takes place in the not-so-distant future, "18 months from today."

"I’m just going to say one thing: The story begins with the end of the world, and then our world begins,” executive producer Alexis Martin Woodall teased as Television Critics Association panel in August, via IndieWire. “It starts in the real world. It’s very tangible, and it’s a familiar hammock.”

More like this
In 'Riverdale' Season 5, Toni Topaz Is The Black Superwoman Without A Cape
By Erika Hardison
Disney+'s 'Loki' Trailer Reveals Key Info About Marvel Fans' Favorite Villain
By Ani Bundel
Why Did Addison Rae Deactivate Her Twitter? Fans Think This Is The Reason
By Brandy Robidoux
Stay up to date