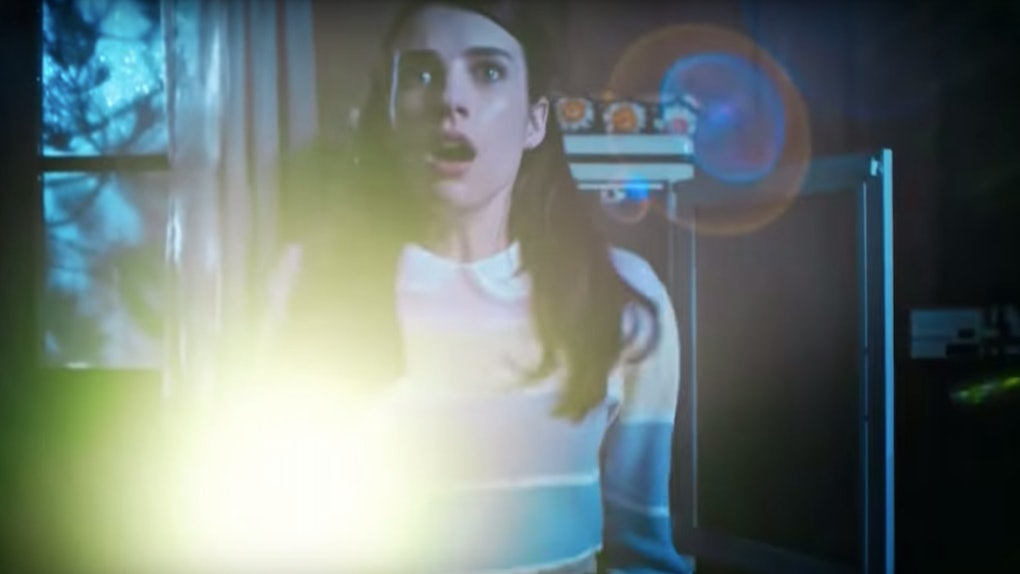 The 'AHS: 1984' Episode 4 Promo Will Seriously Make Your Head Spin

Season 9 of American Horror Story is a lot to handle. By Episode 3, the events at Camp Redwood have gone from spooky to straight-up mind-bending, and the show's fandom is rife with theories about what's to come in future episodes. Luckily for those who can't get enough of Ryan Murphy's signature twists and turns, the AHS: 1984 Episode 4 promo teases even more bombshells are coming soon. However, if you're like me and have trouble wrapping your head around the series' murky premises early on in the seasons, you might be in for some confusion for a while, so hang on tight.

Warning: Spoilers for Episode 3 of AHS: 1984 follow. The first three episodes of AHS: 1984 have proven basically everyone in the show is a suspect in the terrifying events that are going down at Camp Redwood. Of course, there are the established bad guys, Mr. Jingles (John Carroll Lynch) and the Night Stalker (Zach Villa), but they're not the only ones who have been cast in a shade of suspicion. Basically every character has lied about their past in some way that makes them not as innocent as they seem, and the Oct. 2 episode revealed two characters in particular are not exactly who they said they were.

First there was Nurse Rita (Angelica Ross), whose real identity was revealed to be Donna Chambers, a psychologist who helped Mr. Jingles escape the mental institution he had been kept in. Then, at the very end of Episode 3, Montana (Billy Lourd) provided a big shock when, upon coming face to face with the Night Stalker, she totally changed her demeanor and aggressively kissed him. But it wasn't even the PDA that really shook fans, but rather what she said when they came up from air: "Why the hell haven't you killed her yet?" she asked him, leaving fans with about a million questions about how the two know each other and exactly which "her" Montana wants dead.

Following the twisty episode, the promo for Episode 4 dives deeper into the backstory between Montana and the Night Stalker. The 30-second clip opens with what appears to be a flashback clip of the two meeting for the first time in Montana's workout class. "Hey Rambo, my class isn't for posers," she tells him. "This is aerobics. It's serious."

The video also teases another much-anticipated face-off, one between Margaret (Leslie Grossman) and Mr. Jingles. If you'll recall, Margaret claimed Jingles tried to kill her the last time Camp Redwood was open to the public, and her testimony is likely a huge reason why Jingles had been locked away for so many years before his escape. However, for two people who seem to have pretty significant vendettas against one another, their interaction in the promo seems pretty calm. Margaret asks Mr. Jingles why he returned to Redwood, and he replies that he wants to finish what he started. Could their connection also be another classic American Horror Story misdirection? There seems to be more to their story for sure.

Finally, the third "worlds collide" moment in the promo happens when Mr. Jingles and the Night Stalker appear to go head-to-head with one another in the woods. Margaret did tell the Night Stalker to go after Jingles in an earlier episode, so it's possible that battle could be a big one.

Check out the full promo for yourself, and good luck trying to keep all the character arcs and relationships straight in your head.