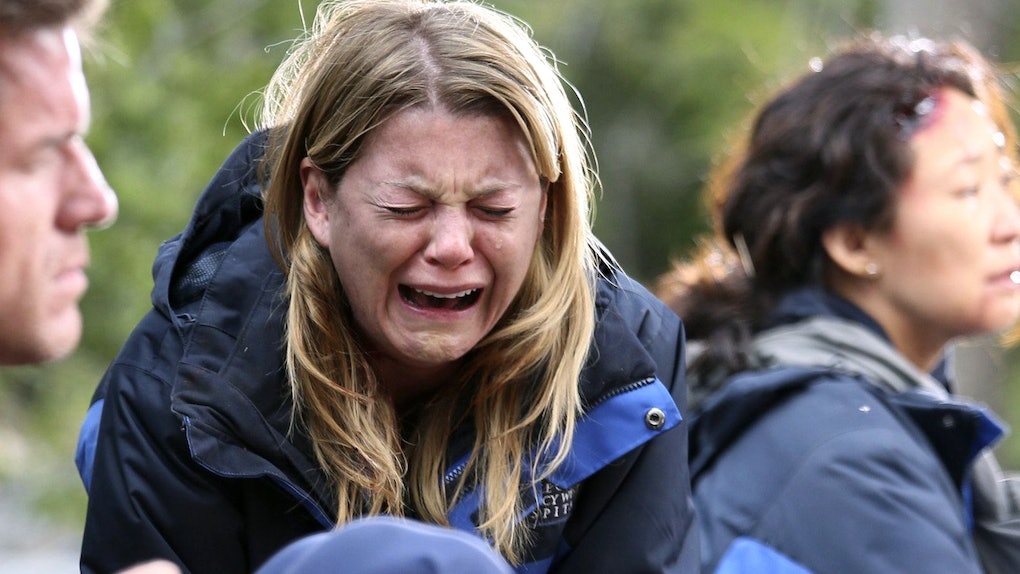 Grey's Anatomy is an emotional wrecking ball from which no one is safe. After all these seasons, pretty much every hardcore fan has been devastated by the loss of a beloved character. But which character loss is the saddest Grey's Anatomy death? Surely that's subjective, but this ranking is hard to argue with.

Since Grey's Anatomy is set in a hospital, it's only natural for the characters to deal with life-or-death drama on a very regular basis. But this show raises the stakes even higher, subjecting the main doctors to everything from a plane crash to a hospital shooting, so you never know when a shocking goodbye is around the corner.

Series creator Shonda Rhimes was never afraid to write off a character, and since Grey's Anatomy has been running for over 300 episodes, the show has been full of countless heart-wrenching deaths that shook viewers to their core. Some were major characters audiences had grown to know and love for seasons, while others were patients who had short but impactful arcs. Regardless, they all hurt like a b*tch.

As Meredith Grey put it: "They say death is hardest on the living. It's tough to actually say goodbye. Sometimes it's impossible. You never really stop feeling the loss." Out of all the Grey's Anatomy deaths, here are the 20 that prove this quote to be true:

TBH, Thatcher's death was mostly sad because of Meredith. Watching her estranged dad pass away from leukemia before they'd had the chance to fully make amends was rough, especially considering how much Mere has lost over the course of the show.

Doc has definitely earned his place as the only non-human on this list. He brought Mere, Derek, and Addison together during the first few seasons, and saying goodbye to an adorable pet is never easy.

Although Ellis and Meredith had a notoriously rocky mother-daughter relationship, it was still difficult to watch Mere lose the only parent she'd ever known (and to see Dr. Richard Webber lose a former lover). But Ellis' presence on the show has endured in other ways: She's since appeared to Meredith in dreams and Mere named her younger daughter after her.

While Harold was a relatively minor character, it was his relationship to fan-favorite Dr. George O'Malley that made his untimely death from organ failure so tragic. Who didn't tear up when George begged his dad to keep fighting while he was on life support?

Cristina Yang had a hard time coping after surviving *that* devastating plane crash at the end of Season 8, and it was her mentor Craig Thomas who really helped her heal. Then, in an especially sick turn of events, she ended up losing him too when he had a heart attack while operating.

If you're the only character Rhimes ever regretted killing off, your death must be sad. Dylan started off as a minor character who helped Meredith through the Grey Sloan bomb scare in Season 2 and literally exploded right when the coast seemed clear. He later appeared to her when she was on the verge of death, which made his sacrifice even more poignant.

There have been so many Grey's Anatomy patients over the years that it's easy to forget most of them, but that's certainly not the case with Bonnie. Fans fell in love with the character's sweet nature, even as she knew she was going to die after getting impaled during a train accident.

Miranda Bailey has become one of Grey's Anatomy's most iconic characters, which made watching her say goodbye to her mother all the more heartbreaking. In Season 17, Bailey's elderly mother slowly died from COVID, and watching Bailey serenade her with "My Girl" in her final moments was too much.

Watching Meredith's half-sister Maggie Pierce navigate her identity and place at Grey Sloan has been an emotional journey, but watching her lose her adoptive mother Diana was particularly upsetting. Maggie initially refused to let her mom go, seeking endless treatments for her cancer and ultimately painting her nails one last time before she passed.

Adele passed away offscreen, but that didn't make losing her any less painful. Webber's longtime wife had just had successful brain surgery for her Alzheimer's, but suffered a heart attack and died just as she started improving. Watching them share one last imaginary dance in Webber's mind is still one of the most moving moments of the series.

A baby's death is especially tragic, so watching Jackson and April lose their newborn son Samuel was a whole new level of excruciating. The couple were forced to induce labor at 24 weeks after learning their son's bones were breaking in the womb and briefly got to hold him before they said their goodbyes.

The hospital shooting was one of the most terrifying storylines in Grey's Anatomy history, and it also led to some gut-wrenching deaths. One of those was Dr. Reed Adamson, who was unexpectedly killed when the shooting began.

Charles Percy was another casualty of the hospital shooting, and for a moment, it truly seemed like he would pull through. He asked Bailey to tell Reed he loved her as she performed emergency surgery on him in an elevator, but he ultimately died from his wounds.

Some beloved characters started off as random patients before becoming people who stuck in viewers' hearts forever. One of those characters was Henry Burton, who went from a patient without insurance to Teddy Altman's beloved husband. After seeing their marriage — which started off just out of convenience — grow into a beautiful romance, watching her break down over his body after he bled out hit hard.

One of the hardest parts of DeLuca's death was how unexpected it was. The fan-favorite was stabbed when he confronted a human trafficker at a nearby train station, and Teddy and Owen were unable to treat his injuries before he passed away.

Izzy Stevens and Denny Duquette's love story had the potential to be as iconic as Meredith and Derek's. But even after Izzy cut Denny's L-Vad wires and broke the law to try and save him, it wasn't enough; Denny later died of a stroke. It was heartbreaking to watch Izzy deal with her lost love and hospital suspension in Season 3, but at least he appeared to her and Mere in visions further down the line.

Will Grey's Anatomy ever top the shocking twist in which the anonymous patient who'd been hit by a bus turned out to be the beloved Dr. George O'Malley? George writing "007" on Mere's hand so he could say goodbye as himself will always make me cry.

McSteamy's death was grueling, especially because it was so drawn out. After losing Lexie and entering a coma following the plane crash, Mark seemed to be OK months later. But he soon turned unresponsive, forcing his fellow doctors to turn off his life support in an emotional start to Season 9.

Lexie's death was arguably even sadder than Mark's, because she was doomed as soon as she got trapped under plane shrapnel during the crash. Watching her die after she and Meredith had finally formed a close relationship and she and Mark had become a happy couple was doubly painful.

How could I not mention McDreamy? The swoon-inducing doctor had an epic romance with Meredith, making his very preventable death even more painful. After stopping to help victims of a car crash in Season 11, Derek was hit by a car himself and died of brain injuries before a surgeon could save him.

Grey's Anatomy will never be the same without Derek, but at least Season 17's dream beach sequences have helped give fans the MerDer closure they need.