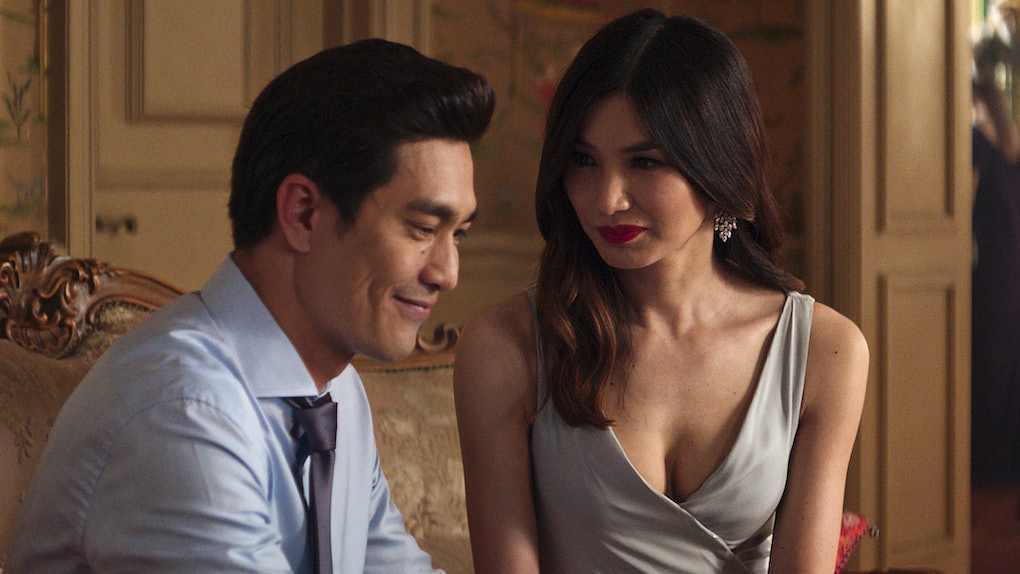 After a strong debut day in theaters, Crazy Rich Asians is expected to dominate the box office this weekend, sweeping up ticket sales and fueling speculation that the creative team will adapt the other books in Kevin Kwan's bestselling trilogy. The following books in Kwan's series cover even more drama and changes within the intertwined families of the first movie, and the Crazy Rich Asians director left a clue for viewers about what a sequel may focus on. That Crazy Rich Asians mid-credit scene could mean that one of Nick Young's family members will end up in the spotlight if the film soon becomes a franchise. This post contains spoilers about Crazy Rich Asians.

For those familiar with Kwan's book, the original story contains so much backstory about Nick's family that something was obviously going to be cut in the film's final version. Hollywood will rev up the drama in an adaptation as much as possible, but when it comes to staying totally faithful to its source, film doesn't allow for as much info as a book does. Facing such a bevy of storylines, director Jon M. Chu ultimately chose to cut the character of Charlie Wu (Harry Shum Jr., aka that guy from Glee who did all the dancing), who had a teenage romance with Nick's cousin Astrid (Gemma Chan).

In the book, Astrid's belief that her husband is having an affair leads to her approaching Charlie for the first time in years and using his resources to discover the truth about her husband Michael. Although one of the movie's teasers shows a brief scene of Astrid and Charlie dancing together at Colin and Araminta's wedding, Charlie doesn't actually pop up in the movie until the surprise mid-credit scene. Chu spoke to Entertainment Weekly about why the former couple's reception moment was cut, saying:

What we put in the movie was great — they actually dance together — and it was so awesome, and Harry’s so charming and so lovable. But the problem was, it made Astrid feel like she was leaving Michael for Charlie, and we didn’t have enough room to expand on the idea. We just had to stay focused. Ultimately it’s about her independence, so that scene was in there all the way until the very end. When we took it out, Astrid’s journey became stronger. It was about her, not about her finding love.

OK, I can't resist a secondary rom-com character being perfectly fine on her own, so kudos to Chu for avoiding a lovey-dovey happy ending for everyone. But for anyone wishing the film included more of Shum, Chu has your back.

If you stuck around until the middle of the credits, you saw the film finally introduce Charlie by cutting to Nick and Rachel's engagement party in a bonus scene. At the rooftop bar at which the party takes place, Charlie makes eye contact with Astrid, who smiles at the interaction. Chu hopes that the fleeting encounter will convince fans that if a sequel is made, it will explore more of Astrid and Charlie's relationship. He told EW:

It was just so fun to see the possibility. I just can’t wait to be able to use more of the cast more. I think we tapped into their talent a little bit, and to be able to dive deeper into their stories and their performances… There’s a lot of gold there to mine, and I hope we get the opportunity.

Pulling this Avengers-esque move is definitely a mark of confidence in the film's ability to generate interest for another movie. Known for becoming the first major motion picture to feature an all-Asian cast in 25 years, Crazy Rich Asians already seems to have broken a kind of glass ceiling in Hollywood, so here's hoping it can shatter even more records with a sequel soon.

More like this
7 Movies About Graduation To Prepare Yourself For The Cry-Fest
By Claire Spellberg
Netflix's Summer 2021 Movie Release Schedule Will Keep You So Busy
By Abby Monteil
‘My Policeman’: Release Date, Cast, Trailer, Plot, & More Info
By Abby Monteil
Stay up to date