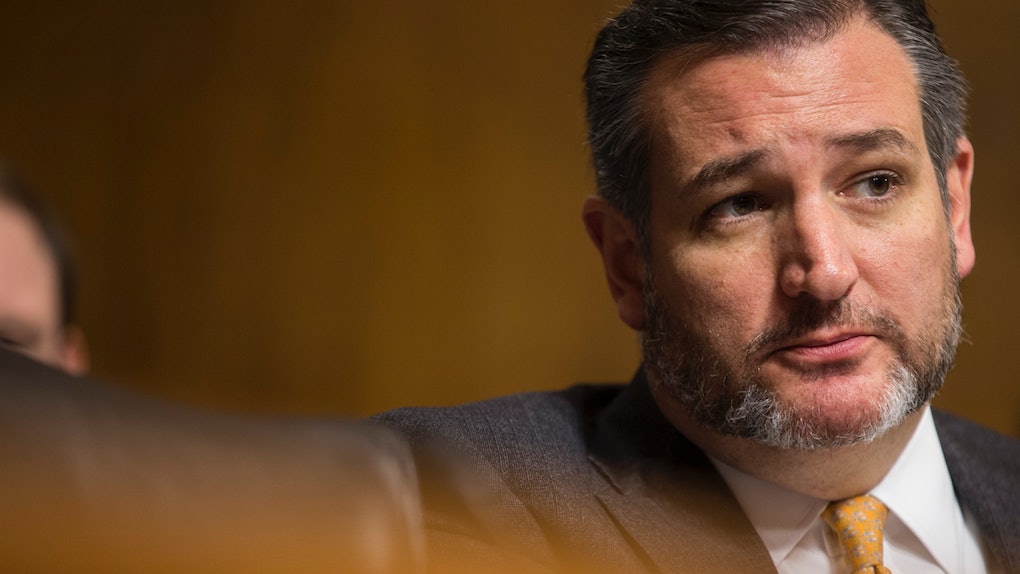 It's official. The most unlikely alliance in 2019 so far is Sen. Ted Cruz (R-Texas) and Rep. Alexandria Ocasio-Cortez (D-New York). In post shared to Twitter on June 12, the senator reached out to the freshman congresswoman regarding her latest argument on contraceptives and proposed teaming up for a new bill. So, Ted Cruz and Alexandria Ocasio-Cortez could work together on birth control. What a curveball, right?

And yes, we're talking about the same Cruz and the same Ocasio-Cortez. The proposal comes just days after Ocasio-Cortez said in a series of Twitter posts that birth control should be free and provided over-the-counter. She wrote on June 7 that her idea comes from the United Kingdom, where women can get contraceptives, including three forms of birth control, for no cost. They can pick up contraceptives from their doctors, community contraceptive clinics and sexual health clinics around the country.

She — and Cruz, apparently — are ready for the United States to catch up to speed. In a tweet shared on Wednesday, June 12, Cruz wrote, "I agree."

He continued on to propose that they tackle the issue together, writing:

Perhaps, in addition to the legislation we are already working on together to ban Members of Congress from becoming lobbyists, we can team up here as well. A simple, clean bill making birth control available over the counter. Interested?

IDK what's even happening anymore. But I'm also not mad at a progressive Democrat and a conservative Republican coming together to find common ground.

As of writing, Ocasio-Cortez has not yet responded directly to the tweet. But she did post something encouraging — namely, a retweet of Rep. Ayanna Pressley's own retweet of Cruz, in which Pressley told the senator to "hit up" Sen. Patty Murray — with whom, she said, she had already written a bill about over the counter birth control. "She and I have already written the bill, album dropping tomorrow," the Massachusetts congresswoman wrote, noting that Ocasio-Cortez and Rep. Katie Hill of California had co-sponsored.

It's not the first time the two have found common ground. Something similar happened on May 30, after the New York representative took to Twitter to respond to some findings by Public Citizen that nearly 60% of former members of Congress go on to lobbying-oriented jobs. "If you are a member of Congress + leave, you shouldn’t be allowed to turn right around&leverage your service for a lobbyist check," she wrote. "I don’t think it should be legal at ALL to become a corporate lobbyist if you’ve served in Congress. At minimum there should be a long wait period."

Cruz responded, writing that he agreed with her and suggesting they work together to make a change. "Here’s something I don’t say often: on this point, I AGREE with @AOC," he wrote. "Indeed, I have long called for a LIFETIME BAN on former Members of Congress becoming lobbyists. The Swamp would hate it, but perhaps a chance for some bipartisan cooperation?"

Her response? "Let's make a deal."

"If we can agree on a bill with no partisan snuck-in clauses, no poison pills, etc - just a straight, clean ban on members of Congress becoming paid lobbyists - then I’ll co-lead the bill with you," she continued.

Ocasio-Cortez later talked about the process in an interview with The Young Turks, saying that their legislative teams were working to see "how far [they] can push this [anti-corruption legislation]."

"It's super bizarre, really weird. I never thought in my life that one of my first pushes would be alongside Ted Cruz," she said. "I think it really shows what the true spirit of not being partisan is."

"Bipartisanship means, OK, I will swallow all of my distaste in this situation," Ocasio-Cortez continued, adding, "because we have a common interest."

With that, I guess the phrase "anything is possible" really is correct. For their sake, hopefully their legislative efforts go as smoothly as their communication has. Stay alert for how this pans out.