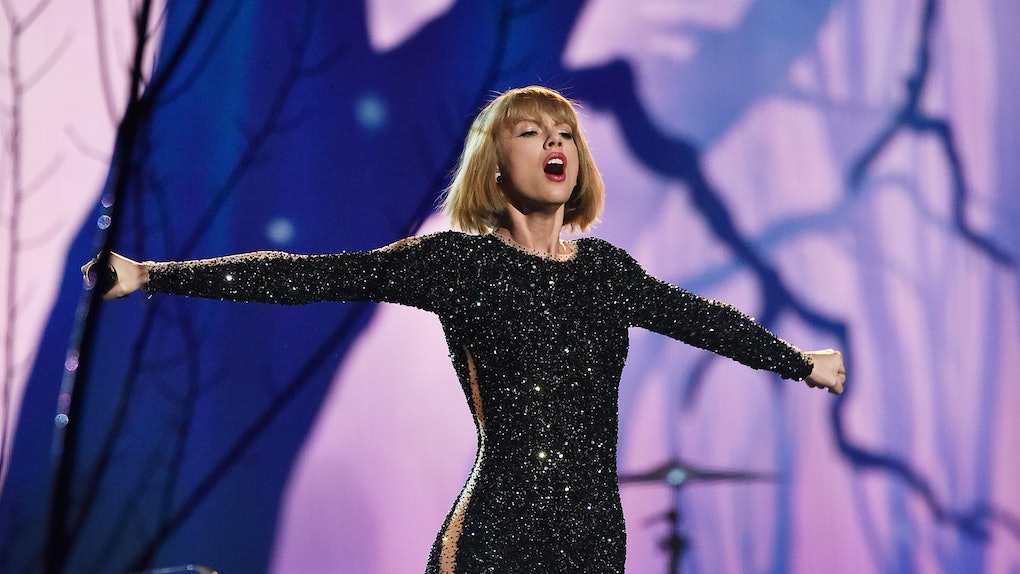 Taylor Swift's "So It Goes..." Lyrics Are So Sexual & We Kind Of Love It

The day is finally here. After a crazy amount of anticipation for a day that felt like it couldn’t come soon enough, Taylor Swift’s new album, Reputation, is here. And God, does it ever deliver. Fans are already obsessed with Reputation, but Taylor Swift’s “So It Goes...” lyrics are particularly making people lose their minds.

The song “So It Goes...” (which you can snag on iTunes here — finally) has definitely got people talking, and with lyrics like these, it’s not surprising to see why. I mean, just check out these steamy lyrics:

See you in the dark

All eyes on you, my magician

You make everyone disappear and

Cut me into pieces

Gold cage hostage to my feelings

Back against the wall

Trippin’ when you're gone

When you get me on, it’s so simple

We could feel it

"All eyes on us"? "Back against the wall"? Is it getting hot in here?

Anyway, the steam doesn't let up in the chorus or subsequent verses either.

and I’m yours to lose

Met you in a bar

All eyes on me, your illusionist

I make all your grey days clear and

I’m so chill but you make me jealous

But I got your heart

When I get you alone it’s so simple

We can feel it

Dressed in black, now, so, so

Scratches down your back, now, so, so

You did a number on me

I did a number on you

You did a number on me

And I’m yours to lose

Dressed in black, now, so, so

Down your back, now so, so

There was a lot of speculation about “So It Goes...” when Swift finally released the official track list — check out the placement:

Landing at about the middle of the pack, there were some theories about the order of the track floating around, with fans who attended Swift's Secret Sessions noting that it’s important to listen to the album in the order Swift presented it.

One fan tweeted, “WHAT IF REPUTATION IS LIKE A CHRONOLOGICAL STORY BEGINNING WITH 'READY FOR IT' AND YOU HAVE TO LISTEN TO THE STORY IN ORDER.”

This theory was totally confirmed by a Swiftie who was at the Secret Sessions and tweeted, "I’m not telling people how to listen to the album, but I’m just HIGHLY recommending that you guys listen in order because it is a story."

Others were totally clued in to the ellipses going on in a couple of the song titles, attempting to piece together what exactly that could mean. Because it has to mean something, right?

"...Ready For It?" begins with ellipses, and "So It Goes..." ends with ellipses. What. Does. It. Mean? Some fans speculated that perhaps those ellipses indicated something in particular — with songs after the ellipses of “So It Goes...” representing Swift’s real self.

Another fan tweeted, “So it goes... comes after Look what you made me do which means Taylor is going to tell us what she did.”

In case it’s all too confusing, here’s how other fans break it down:

This Twitter user's tweet is a good way to sum all the song order theories up: “I just thought that after lwymmd which has 'taylor swift cant come to the phone right now cause she's dead' the next song is 'so it goes...' with ellipses and next ARE SONGS ABOUT THE NEW TAYLOR WHO IS VERY IN LOVE AND HAPPY WITH HER LIFE.”

Some compared the "So It Goes..." lyrics to the mention of that phrase in her song “Style." Does that bring anything to the conversation?

So it goes, he can't keep his wild eyes on the road

Takes me home, lights are off he's taking off his coat (Hm yeah)

There's also a lyric from her song "You Are In Love" that references the same phrase: "And so it goes, you two are dancing in a snow globe."

Swift has been building the excitement until the Reputation release day by sharing so much about the process. It’s truly been a gift to see some of the behind-the-scenes stuff, a peek at the Secret Sessions, and the songs and videos she’s released ahead of the album.

Those picking up Reputation at Target get a bonus, which she explained on Twitter:

Swift also cheekily shared the back covers of those "unique magazines" she mentioned, having a little fun at the expense of the media: