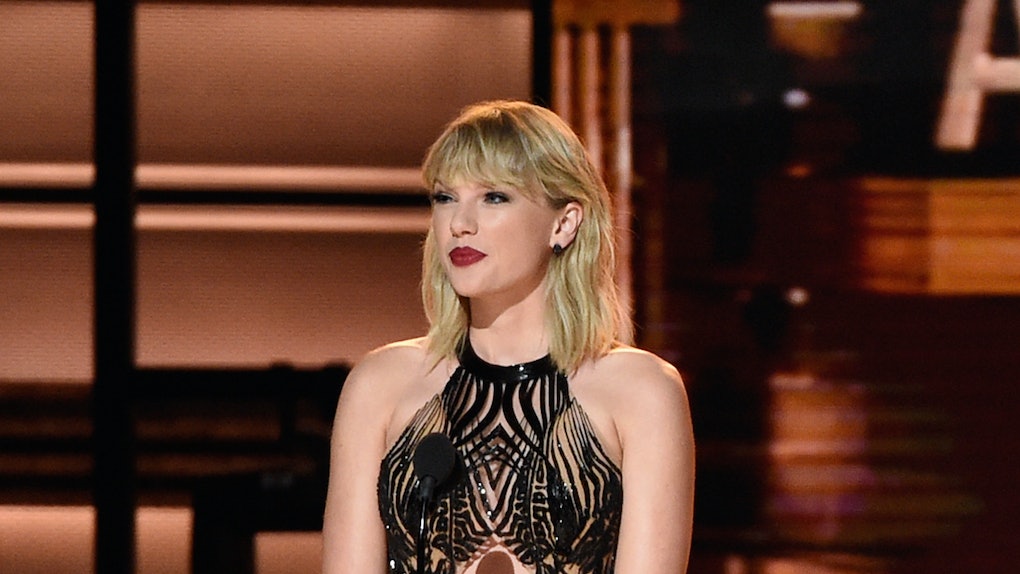 Taylor Swift's "...Ready For It?" Video Shades Kanye West, According To Twitter

Taylor Swift has a new music video dropping this week and I’m all in on the detective work to decipher all the meanings and shade that may pop up. Because you know it’s going to happen. The only problem is that, so far, Taylor Swift's "...Ready For It?" video consists of mere seconds of a teaser. Hey, that’s never stopped the internet from dissecting anything Swift-related and spinning off into a million theories. Why stop now?

The biggest theory, naturally, is Kanye West-related. It has to be, after all. Is the “...Ready For It?” video going to take some swipes at West or are people reading too much into the teaser clip?

The moment that has everyone thinking Swift might just be referencing West is when she appears naked in the video clip. Well, a nakedish bodysuit, which seems to be a reference to West’s “Famous” music video in which he lays in bed with wax models of naked celebrities, with a nude Swift lookalike directly beside him.

West’s “Famous” lyrics include this Swift mention: "I feel like me and Taylor might still have sex/Why? I made that b*tch famous." You may recall that when the song came out, West claimed that Swift approved that lyric and Kim Kardashian later released a recording of Swift appearing to sign off on the questionable lyrics about her.

Comments about Swift in a naked bodysuit in the "...Ready For It?" teaser flooded Twitter, with one fan saying: “Remember when Kanye had that "naked" Taylor for famous? She's turning it back with android naked Taylor for ‪#ReadyForItMusicVideo.”

Another fan tweeted: “‪#ReadyForItMusicVideo ‪I guess the naked body suit part if a huge FU to Kanye's Famous MV. She is the only one who's in consent of her body!”

One fan broke it down like this, tweeting: “Famous — Kanye put a naked wax Taylor; RFI — Taylor made a naked version of her, BUT STRONGER. Don’t mess with TSWIFT ‪#ReadyForItMusicVideo.”

Fans are understandably excited to see the full “...Ready For It?” video and there’s already been some great comparisons with her past videos, including this look at “Bad Blood:"

Or this comparison with “Out of the Woods.” Parallels, people. This fandom certainly does its homework.

The attention to detail is also there because fans are digging in deep. For example, did you notice the graffiti scrawled in one bit that reads “They’re burning all the witches” as she appears to get zapped by lightning? What. Does. It. Mean?

Others looked to Tumblr to see what the buzz has been about "...Ready For It?," with this mention a clear standout since Swift liked it:

The music video's director, Joseph Kahn, tweeted this about the "...Ready For It?" video: “Anime homage. Some obvious, some not so obvious. Thursday. #readyforitmusicvideo.”

Quick! We need an anime expert. Never fear, someone tweeted this helpful info:

And, of course, that anime theme could have another West connection, as one fan pointed out: “Kanye West made an anime homage too in his mvs few yrs ago OMG TAYLOR YOU ARE SHADING HIM SO HARD.”

Other theories started to spin after the director tweeted: “Taylor goes Super Saiyan this Thursday,” with a fan responding: “So you're tryna tell that Taylor is going Super Saiyan mode to destroy all her haters. COOOOOLL.” Anyone else getting psyched about the video concept?

Others were just straight-up impressed, with one fan tweeting: “Did you just put TAYLOR & DRAGONBALL-Z IN THE SAME SENTENCE??? THIS IS ICONIC.”

Guess we’ll all just have to wait for Swift’s “...Ready For It?” music video when it drops on Thursday, Oct. 26. Then we’ll have a lot more material to work with and about a thousand more theories to chat about.