Taylor Swift's music video for her latest track "You Need To Calm Down" is a lot to take in. The colors alone will make you feel like you just popped a rainbow gobstopper. Pair the stunning visuals with an onslaught of celebrities and famous personalities and you have one hell of a think piece to write. While the music video is designed to celebrate LGBTQ pride and promote equality, some Swifties are also celebrating the end of a longtime feud. Taylor Swift's comments about reconciling with Katy Perry prior to her cameo in the music video make it sound like the two women have been fine for a while now. God bless us, everyone.

If you haven't watched the "You Need To Calm Down" music video yet, may I suggest you navigate away from this page and do so now? I'll be here when you get back.

OK. So, everyone saw Katy Perry's major cameo in her Met Gala hamburger dress, right? At the end of the video as a celebratory food fight breaks out, Swift — dressed in a french fry costume — spots Perry dressed as a hamburger across the lawn. They walk towards each other, embrace, and thus marks the ceremonial end to their longstanding feud.

In a new interview with BBC 1 Radio, Swift says their coming together actually started when Perry sent her a "beautiful note" and a literal olive branch to the opening night of her Reputation tour. However, Swift says it was a while before they actually ran into each other at a party, which solidified they both had moved on. 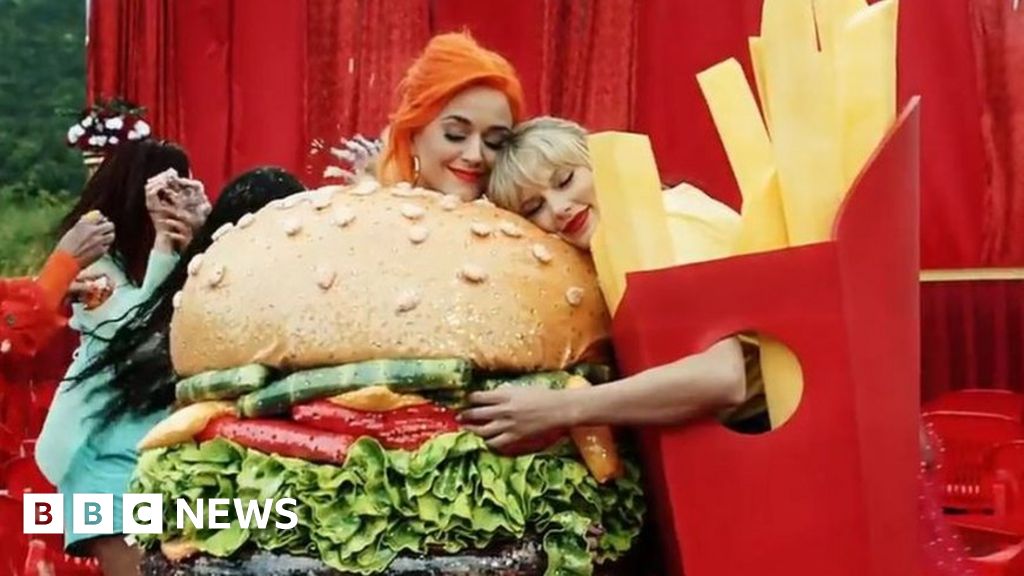 It was just really, really clear that we remembered how much we had in common. Both of us have been in a really good place for a while, but I don't know if either of us really knew if we were gonna talk about it publicly.

Swift went on to explain that when she originally had the idea to include Perry in the music video she wasn't sure if Perry would be open to making their rekindled relationship public. Swift says she would have been "totally fine" if Perry wanted to keep it between them, but instead got a wonderful response. Swift explained, "I sent it to her, and, ya know, she was like 'I would love for us to be a symbol of redemption and forgiveness.'"

Funnily enough, Swift had the idea to include Perry in the video before the hamburger dress came to fruition. "I didn't think of the burger and fries costume until she wore the burger to the Met Gala after party and I was like, ‘That is amazing,'" she said.

I was thinking we're gonna have this moment in the video and if it's too on the nose, if it’s too, like, us wearing normal clothes and hugging, it won’t really fit into the video ... So, I was like, ‘Can we do a burger and fries as a metaphor for two people who belong together? And, like, people who are a perfect pair?’ And she thought it was really funny! So we did it.

Honestly? It's so good. Taylor Swift dressed up as french fries hugging Katy Perry dressed as a hamburger is one of those things you don't know you need until you have it.

Let's take a note from these two and calm down, shall we?