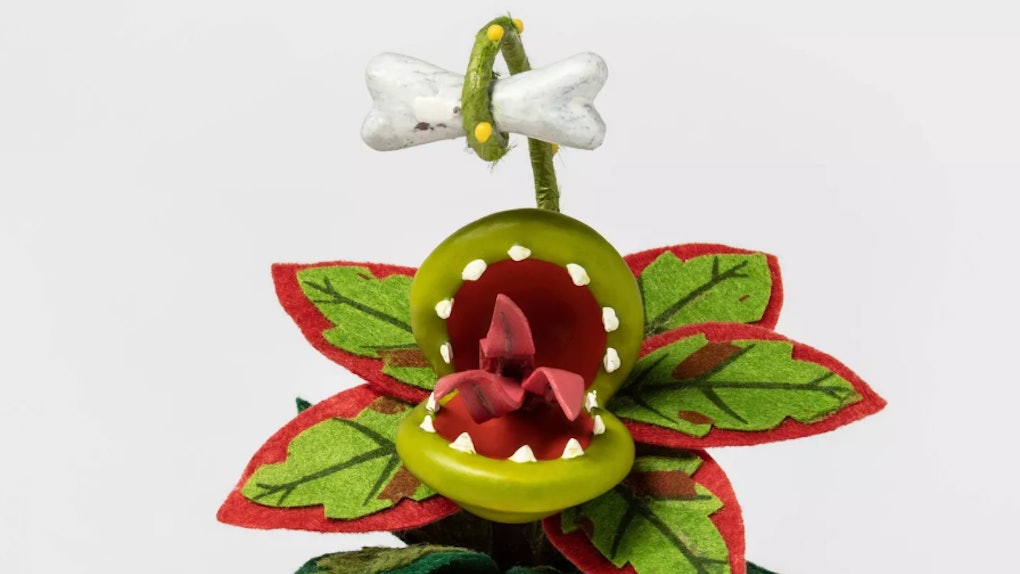 The scariest time of the year is still a few months away, but Halloween lovers have been able to get in on the spooktacular fun a little early with the recent release of a number of on-theme bites and sips as well as decorations to transform your home into the haunted abode of your dreams. If you want to add some shiver-inducing touches to your living or work space before patio season comes to a close, Target's Ghoulish Garden Halloween Decor Collection is now here to serve up a creepy crawly, albeit very whimsical, vibe with a line of succulents that look like they're something out of a Tim Burton movie. Just a word of warning: You'll probably be craving a PSL while you browse these eerie offerings that are giving off major autumn inspiration, no green thumb needed.

If you've been checking out Target's Hyde & EEK! Boutique, which rolled out at the superstore back in July, chances are that you've browsed the Ghoulish Garden line to balance out some of the undead elements in your home. As someone who admittedly doesn't have a green thumb but is always on the lookout for a way to add some greenery to her home, I tend to gravitate towards succulents as a low-effort option. Alongside the collection's offerings of admittedly terrifying faux plants that boast everything from fangs to creepy eyeballs and lips, Target is also now selling three $4 scary succulents that are housed in an array of colored pumpkins and are modeled after carnivorous plants. Genius, I know.

If skeletons and ghouls seem so 2018, you'll want to up the bone-chilling vibes this year with creepy plants that'll simultaneously add color to your display while serving as a conversation starter during your pre-Halloween gatherings. After all, how many people will have a eerie succulent modeled after a Venus Flytrap on their desk?

The Creepy Succulent in Pumpkin Orange immediately caught my eye as an option that offers a more traditionally-hued pumpkin base and a terrifying plant that looks like it's ready to gobble up a bone that it caught in one of its green tentacles. Somehow, the eerie product still manages to toe the line between making you want to hide under your bed and being pretty adorable, all while putting you back less than a fiver, which is a win-win in my book.

For individuals who are searching for an aesthetically-pleasing answer to Halloween decor, you'll want to check out the creepy magenta succulent that's housed in a white pumpkin. It's still modeled after a carnivorous plant, as seen by the fact that one of its tendrils has grabbed a white bone to snack on and its row of white teeth, but it's somehow less disconcerting when there isn't an obvious mouth and tongue in the picture and the colors are this pretty.

Last but not least, the creepy succulent that's housed in a black pumpkin might be the weirdest one out of the bunch, which can be both a good or a bad thing depending on who you ask. Inside a jet black pumpkin is the piece of resistance: A blue flower that encases a bloodshot, all-seeing eye that looks like it could have been plucked straight from the Night King. It's literally the stuff of nightmares.

Again, all of these eerie succulents are retailing for less than $5, so I'd grab one for yourself and one to gift to scare your coworker or bestie. Keep in mind the succulents won't ship until Sept. 9, per the Target website, but the in-store button says "Coming Soon," so there's a chance these might pop up in time for your next Target run. Who says you can't start the Halloween festivities in August?