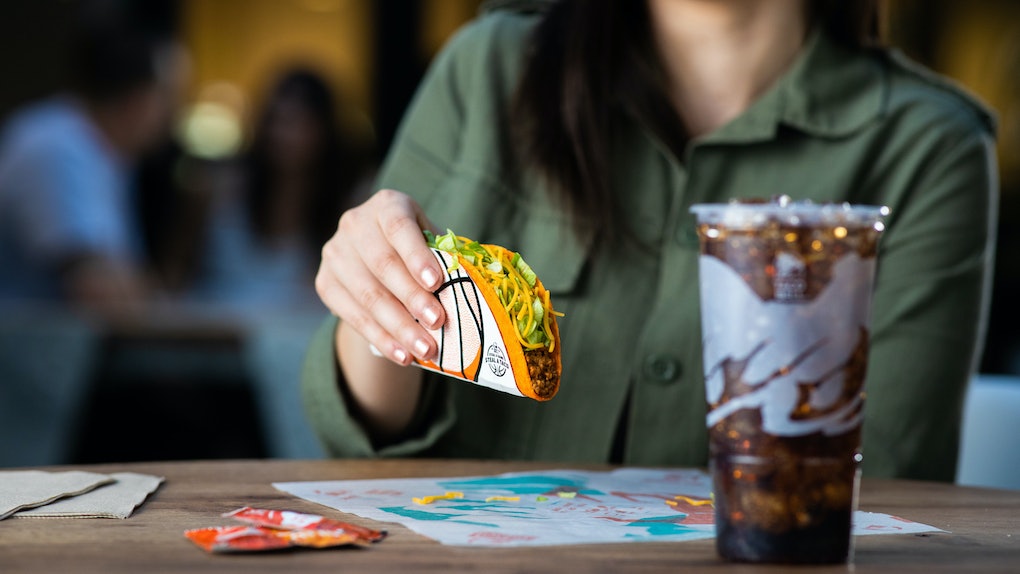 Taco Bell's 2019 "Steal A Game, Steal A Taco" Promotion Could Help You Score A Free Snack

I don't know a lot about basketball, but I do know a lot about Taco Bell. I also know that it's finally time for the company's reoccurring "Steal A Game, Steal A Taco" promotion (yay!). If you're unfamiliar with the tasty promo, allow me to catch you up. Just like the previous three years, Taco Bell's 2019 "Steal A Game, Steal A Taco" promotion is here to help you score a complimentary Doritos Locos Taco in June. In order to win one, there are a few things that you'll need to do (and, yes, watching basketball is one of them).

OK, fine: You don't technically need to watch basketball in order to score a free Doritos Locos Taco. If you have internet service (or a sporty friend who's in the know), you'll be all set. Why? Well, that's because this promotion relies heavily on the outcome of the 2019 NBA Finals. It goes like this: If a team that's on the road wins a game against a team that's playing at home, Taco Bell restaurants across the United States will give away free Doritos Locos Tacos on June 18 from 2 p.m. to 6 p.m. local time, per the company's press release. Customers can only get one free taco each, but one free taco is better than none.

If you're a dedicated Taco Bell customer (or basketball fan), you can also order your Doritos Locos Taco online or via Taco Bell's mobile app (which is available for iPhone and Android users). If you order through one of those platforms (and a "road team" wins a game during the finals), you'll be able to redeem your free Doritos Locos Taco all day long on June 18. You'll still have to pick it up at your nearest Taco Bell location, but you won't have to show up during restricted hours. Currently, the Eastern Conference Finals between the Toronto Raptors and Milwaukee Bucks are still going on (the Golden State Warriors won the Western Conference Finals in four games), so you'll see who will be vying for the title once the championship games begin on May 30.

To find a local Taco Bell in your area, check out the "Locations" page on the company's website and enter your city information. Then, a list of nearby Taco Bell restaurants should appear on your screen.

Marisa Thalberg, Global Chief Brand Officer at Taco Bell Corp., talked about the promotion in a press release. She said,

We're excited to partner with the league for the NBA Finals once again, allowing sports and taco fans nationwide to unite over one thing – rooting for tacos. Regardless of which two teams make it to the Finals, we look forward to giving all fans, no matter the jersey they prefer to wear, the chance to win with everyone's G.O.A.T (Greatest of All Tacos), the Taco Bell Doritos Locos Tacos.

As Thalberg stated, Taco Bell's version of the "G.O.A.T" stands for the "Greatest of All Tacos" — and the company has given its beloved Doritos Locos Tacos that special title.

If you're a fan of Doritos Locos Tacos (and basketball, of course), tune into the 2019 NBA finals. For reference, the games begin on May 30 and could run through June 16, so keep up with the stats and cross your fingers that a road team steals a win.

More like this
Angry Orchard's Peach Mango & Strawberry Hard Cider Flavors Are Twists On A Classic
By Daffany Chan
What Is Taco Bell's Times Square Digital Cantina? It's A Unique Experience
By Lara Walsh
Here's Where To Buy Pringles Deep Fried Dill Pickle Chips For A Tangy & Crunchy Snack
By Lara Walsh
Stay up to date