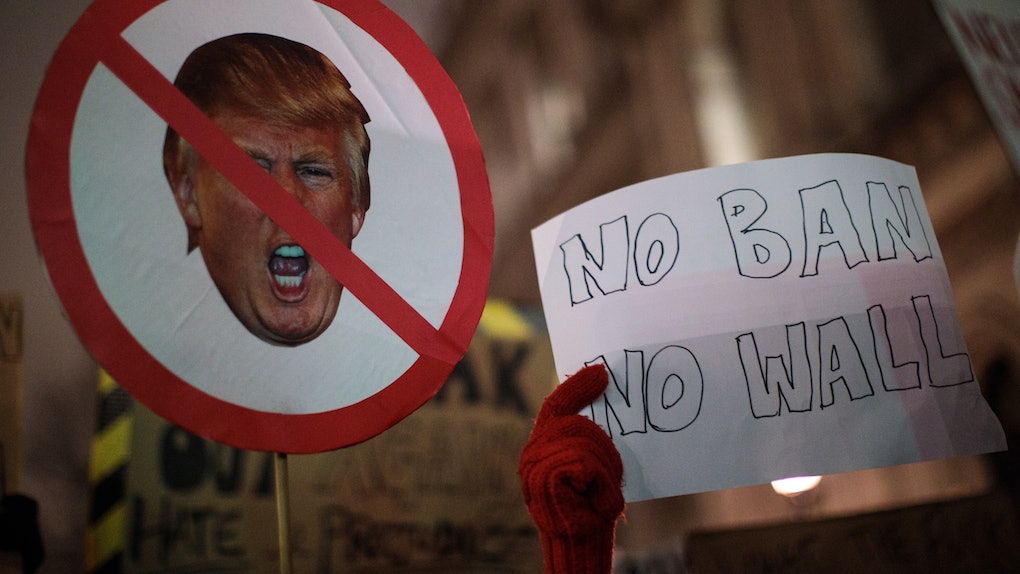 Supreme Court Allows Trump’s Travel Ban To Go Into Effect, So Here’s What Could Happen

The most recent news out of the nation's highest court is something that many Americans didn't want to hear. The Supreme Court decided on Dec. 4 that President Donald Trump's travel ban can go into effect while legal battles against it wind their way through lower courts. Though it's not a final ruling, this vote does not necessarily bode well for the future of the plan while it is debated in the lower courts. So what exactly does this announcement from the Supreme Court mean, and what can happen moving forward?

The latest version of Trump's travel ban was granted approval to be implemented while it's being debated in lower courts, who will argue the legality of the ban. So far, the San Francisco-based 9th U.S. Circuit Court of Appeals and the 4th U.S. Circuit Court of Appeals in Richmond, Virginia, are set to debate the legality of the ban this week, according to the Associated Press.

This current version of Trump's ban, which is the third iteration we've seen since he's taken office, prevents residents from eight different nations (six of which are largely Muslim nations) from entering the United States. Each nation has different limitations that range in severity.

The six Muslim-centric nations named in the ban are Chad, Iran, Libya, Somalia, Syria and Yemen, which critics say indicated that Trump is exhibiting a prejudice against these citizens due to the religious influence present in their countries. Omar Jadwat, director of the ACLU's Immigrants' Rights Project, stated in response to the news of this decision, “President Trump’s anti-Muslim prejudice is no secret. He has repeatedly confirmed it, including just last week on Twitter. It’s unfortunate that the full ban can move forward for now, but this order does not address the merits of our claims.”

So while this is not the final ruling, it's a strong indication that the Supreme Court will ultimately make the final decision to declare the ban legal, should it continue to go through the legislative process. If decisions are made quickly in the appellate courts — it has been indicated that those courts will reach their decisions “with appropriate dispatch” — the Supreme Court could be set to make a final decision on this issue as soon as June of next year.

So how did the ban make it this far? We'll have to go back in time to flesh that out. Trump originally put his first version of the travel ban into effect on Jan. 27, just seven days after taking office. The executive order was enforced without warning, which created widespread chaos in airports all over the country. In response, a federal judge in Brooklyn issued an emergency order on Jan. 28, blocking parts the ban.

Federal judges have the authority to block executive orders made by the president. Aside from the Supreme Court (which is the highest level court a case can reach), there are 94 U.S. District Courts and 13 appellate courts that sit below the U.S. Supreme Court, called the U.S. Courts of Appeals.

Trump issued his third version of the travel ban on Sept. 25, which was again temporarily blocked by U.S. District Judge Derrick Watson. This back and forth has culminated with the decision by the Supreme Court to allow the enforcement of the ban while it's being debated in lower courts.

Given this latest decision to temporarily approve the ban while it's argued in the U.S. Courts of Appeals, it's clear that there is interest in this issue. So it's very likely that it will get taken on by the Supreme Court sooner rather than later.

This decision can be viewed as a pretty big win for the Trump administration, even if it's a temporary one that isn't the ultimate ruling on the legality of the ban. Trump's camp responded positively to the Supreme Court decision in a statement from Michael S. Glassner, the executive director of Donald J. Trump for President, Inc. He wrote,

Now that the Supreme Court has ordered the lifting of restrictions on this ban, minimum security standards for entry into the United States can be enforced. All Americans should take heart that President Trump is fully committed to Making America Safe Again, and will continue the fight to ensure their safety no matter what.

This choice by the Supreme Court to block people from entering the United States (presumably based on religion and nationality) is only a temporary one. So although Trump supporters of the travel ban are celebrating today, this debate is far from over.