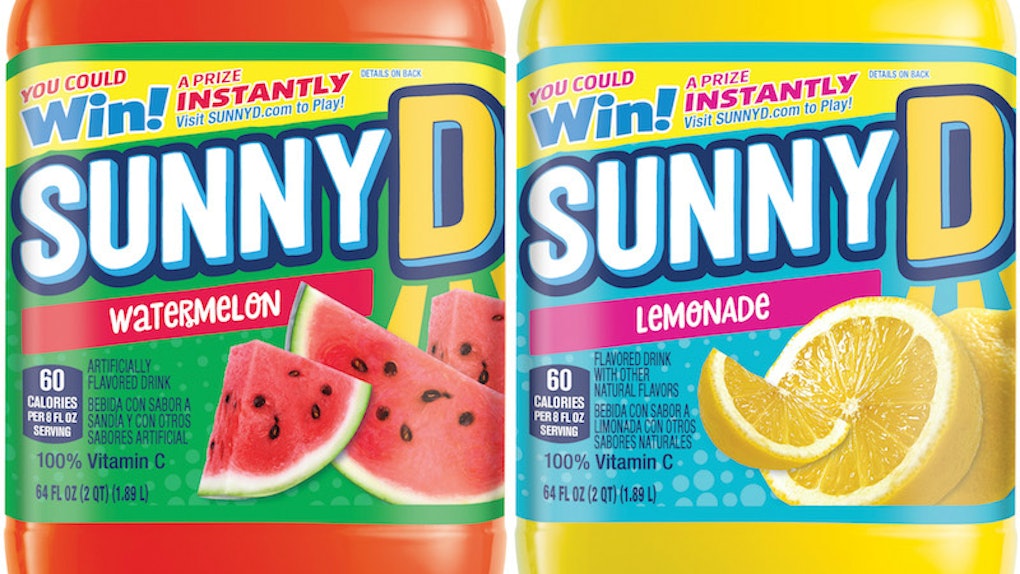 If you're a '90s kid (like me), there's a good chance you grew up with SunnyD in your fridge. There's nothing like a tall glass of the orange drink, especially when it's hot outside. If you're craving a glass of the good stuff, you'll be happy to hear that SunnyD's new Watermelon and Lemonade flavors are here just in time for summer. The new flavors joined a delicious lineup of over 10 SunnyD options, but they won't be around forever.

That's right: If you want to try SunnyD's new flavors, you'll have to grab a few bottles this summer. According to the company, the Watermelon and Lemonade selections will only be available until August 2019 (while supplies last). But before you run to the grocery store in pursuit of the nostalgic selections, you might want to learn a little bit more about 'em.

I'll start with the Lemonade flavor. According to SunnyD, the summery option is a "refreshingly bold" version of the OG orange drink you know and love. As someone who loves both lemonade and SunnyD, I'm sure I'll enjoy it. If you feel the same way, keep your eyes open for the bottle pictured below.

If lemonade isn't your style, check out SunnyD's new Watermelon option. It was released alongside Lemonade, and it sounds just as refreshing. However, unlike Lemonade, it has a reddish-pink hue that mimics the color of an actual watermelon. If you're craving a juicy slice of the fruit, opt for SunnyD and grab a Watermelon bottle.

Now that you know which bottles to look for, you're probably wondering where you need to look for 'em. Thankfully, you have a few options. According to the company, you'll be able to find the new flavors at various retailers that sell SunnyD in the New York metropolitan area and in the Midwest. FYI, some of those retailers include Tops, Spartan-Nash, Save-A-Lot, and Stop & Shop. If you live in one of those areas near one of the supermarkets that I listed, check and see if the new SunnyD flavors are in stock.

If you find a store near you that's selling the new SunnyD bottles, you might want to know how much they cost. Apparently, their prices range depending on how many you're trying to buy. According to the company, a 24-pack should cost around $6.99, and a 18-pack should cost around $5.99. However, if you buy a 64-ounce bottle, it should only cost around $2.49. With that being said, you can buy a decent amount of SunnyD for less than $10.

As you can see, kicking back and enjoying a nostalgic sip of SunnyD is totally doable. However, if you're trying to enjoy the company's brand new Lemonade and Watermelon flavors, make sure you grab a few bottles this summer. If you end up loving them and want to try even more sweet selections (aside from the original, of course), head to the company's website and look for your new fave. Other SunnyD flavors include Mango, Blue Raspberry, Orange Pineapple, and more — so take your pick and start pouring.

More like this
Here's How To Enter The Absolut Watermelon Fresh Escape Contest For A Decked Out RV
By Daffany Chan
These White Claw Surge 8% Hard Seltzer Flavors Sound Super Refreshing
By Lara Walsh
What's In Kellogg's & GLAAD's Together With Pride Cereal? Expect Berry Flavors
By Daffany Chan
Stay up to date