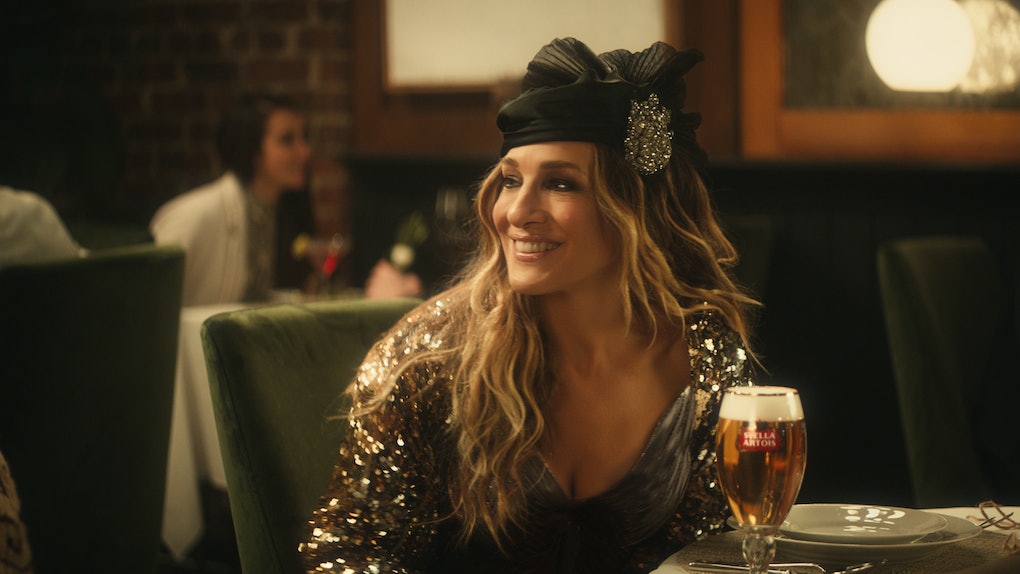 After nearly a decade, Sarah Jessica Parker is stepping back into Carrie Bradshaw's Manolo Blahniks's for a Stella Artois' 2019 Super Bowl ad. While fans shouldn't hold their breath for a third Sex & The City movie, Parker's partnership with water.org and Stella's Pour It Forward campaign is an homage to the show's opening sequence; and it's fabulously satisfying.

Founded by Matt Damon, water.org teamed up with Stella Artois to help provide people in the developing world with access to clean water. Over the past four years, over 1.7 million people have been helped by this partnership, and the number is only growing.

Along with Parker, Jeff Bridges is featured in this year's campaign, reprising his Big Lebowski role as The Dude. The message is both nostalgic and impactful.

In an interview with Elite Daily, Parker details her decision behind the partnership, "The more I learned about water.org, I found their work not just important but urgent, life-changing, life-altering so it became incredibly easy for me to say yes — not only that, but to feel privileged to be a part of it. I just think it was clever to take these two characters who have these associations with these drinks and show them making this very simple switch."

For a limited time, every six pack of Stella sold gives six months of clean water for one person in the developing world, every 12 pack gives 12 months of access, and every bottle sold at bars and restaurant gives one month’s worth of clean water.

Parker elaborates, "All of it is so simple and so specific and I think so well done. And taking the opportunity [the Super Bowl] when people tend to gather to drink responsibly to make this choice, I think if done well, these sorts of things can have enormous impact."

The entire experience was pretty spectacular.

For Parker, reprising her role as Carrie Bradshaw was "wonderfully bizarre in the best way possible." She explains, "In advance of shooting that day, we all spent a decent amount of time talking about the campaign and all the details that add up to making it hopefully an engaging experience. So to finally be there after much discussion, it was really fun... Doing the title sequence was fun and joyful, primarily because of the message and what we are trying to do and say and support, but then of course working with Jeff Bridges. The entire experience was pretty spectacular."

It's been over eight years since fans have seen Carrie Bradshaw, but according to Parker, she imagines not much has changed – especially when it comes to her fashion.

Parker worked with stylist Erin Walsh to carefully curate Carrie's 2019 look. "We were up until midnight putting it all together, figuring it out –all the details that matter so much, the kinds of things that really add up, especially when it’s somebody who has such a very specific relationship with fashion. Erin and I did it together and she was fantastic and pulled all sorts of amazing pieces, vintage pieces, older fashion pieces, and some newer pieces, and it was really fun to sort that out."

The clothes have changed, but the woman hasn't.

"I think not surprising, she’s [Carrie's] making the kinds of choices she always made. You know, high and low. She’s got the gold shirt in the teaser, [it's a] vintage piece — not fancy, not expensive. I’m wearing vintage, I’m wearing fashion right off the runway; it’s that mix and it’s pretty consistent. It’s the palette and the reach that we know. The things that she typically reaches for."

Parker concludes, "The clothes have changed but the woman hasn’t."

More like this
Who Plays Jamie In 'Cruel Summer'? You've Seen Froy Gutierrez Before
By Rachel Varina
17 Tweets About Simu Liu In The 'Shang-Chi' Teaser, From Proud 'Kim's Convenience' Fans
By Dylan Kickham
Lamar Odom's Quotes About The Kardashian Family Curse Do Not Hold Back
By Brandy Robidoux
Stay up to date