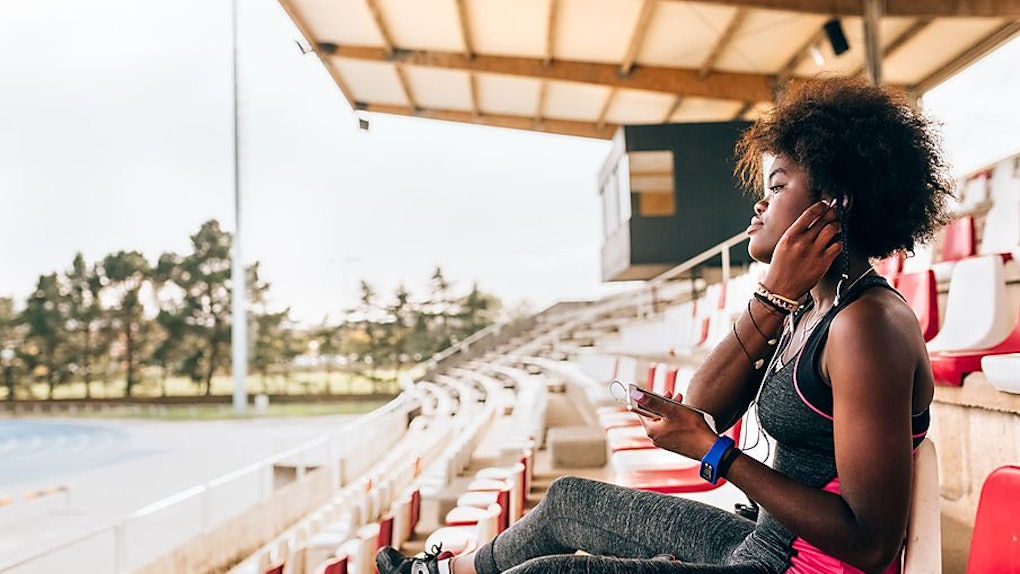 Spotify's top global workout songs are filled with a combination of stunners, including some old classics, and a few newbies, too. In the United States, the top workout song is Post Malone's "Rockstar," which was coincidentally the most streamed song on New Year's Eve. Apparently, a lot of people treat the last night of the year like a killer cardio session — go figure.

Good music can make or break your workout — literally. When we listen to music, our brains release dopamine, which makes us feel good, rather than bored or overwhelmed by all the movement and sweating. Plus, music is the perfect distraction for that super tough workout you're looking to conquer in the new year. For your healthiest, happiest workout mentality coming into the new year, here are the top 10 global workout songs on Spotify from 2017.

Personally, this song holds a special place in my heart, because it was the first song I played for every workout when I was a collegiate athlete. If the first 10 seconds don't pump you up all on their own, then Eminem's monologue at the beginning certainly will.

Considering this song was one of the most streamed in 2017, you probably know all of the lyrics by heart at this point. Post Malone is rocking some vibes à la The Weekend in this video, and I'm definitely here for it.

3. "Lose Yourself" By Eminem

It's the one song that almost every person can rap at least two verses to. I mean, come on, that line about spaghetti is legendary. Not to mention the fact that this song is semi-autobiographical, which makes it inspiring AF to work out to.

Kendrick Lamar created this song as a look in the mirror for himself, as a way to remember to always be humble amidst all of the success and chaos in the world. Beyond that, the beat is pretty sick, too.

5. "More Than You Know" By Axwell Λ Ingrosso

I can't stop jamming to this song since I saw it on the list. It's every pop song you grew up with: upbeat, high tempo, and has a feel-good set of lyrics to keep the mood up when you're ready to burn out halfway through your workout.

Is it just me, or could Beyoncé turn an Elton John single into a banger?

Don't get me wrong; this song was great before Queen Bey hopped in, but now it's freaking legendary. Add a dash of kickboxing, and your day will be lit.

I've always loved this song, but the video is pretty exceptional, too. Play this one when you're looking to set a rhythm in the heart of your workout, since it's not too intense, and the beats are so consistent you could (literally) dance to them.

8. "You Don't Know Me" By Jax Jones Featuring RAYE

Starting to lag after the first 20 minutes of a workout? Pop this puppy on, and it'll basically be like a natural shot of espresso to help you push through.

Plus, at four and a half minutes, this song's a bit on the longer side, which means you can get totally lost in the music — and your workout.

I'll admit, I'd never heard of this song before coming across this list, but it's now the most recent addition to my workout playlist. It's catchy as hell, and it's also a pretty effective list of rules for how to get over a breakup — which is honestly a good thing to have at any moment.

The workout banger to end all bangers. I'd almost argue this one beats out both Eminem tracks, although, who am I kidding, I'm playing all three on repeat nonstop whenever I break a sweat.

Nobody on this Earth has the same energy Kanye does, and this song is guaranteed to make you feel, well, hella powerful.

More like this
Can I Exercise After A Flu Shot? Experts Recommend Listening To Your Body Post Vaccine
By Georgina Berbari
I Tried Working Out With A Kardashian Trainer & Now I Never Want To Be Famous
By Rachel Varina
These Iconic 'Grey's Anatomy' Songs Belong On Your Moodiest Playlist
By Abby Monteil
Stay up to date