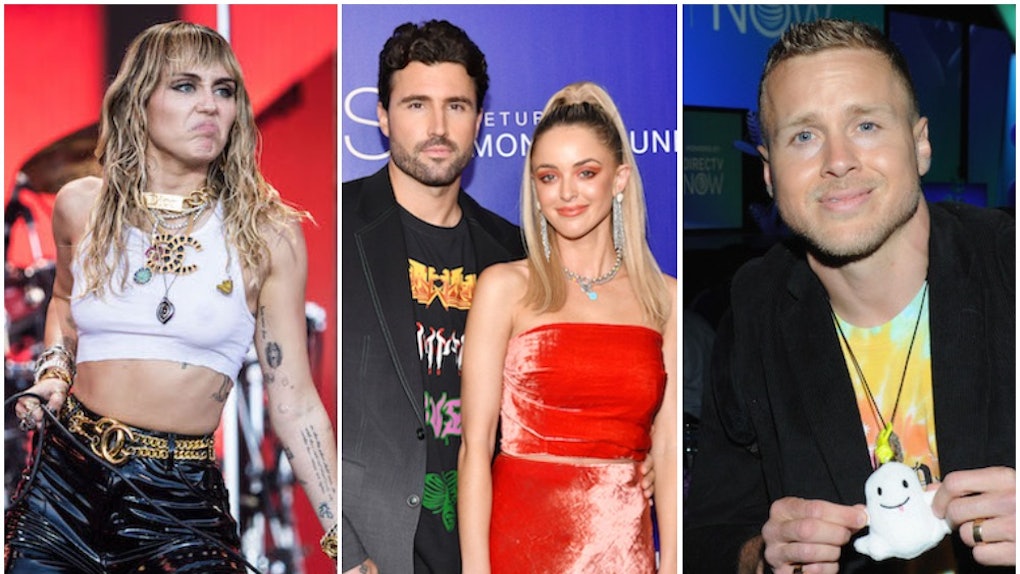 It's been a whirlwind couple of months for Miley Cyrus, whose name has been swirling through the gossip mill ever since she and her soon-to-be-ex-husband, Liam Hemsworth, confirmed split rumors in August 2019. Now, the two are going their separate ways after less than a year of marriage. Hemsworth reportedly filed for divorce Aug. 21, and Cyrus has seemingly moved on with Brody Jenner's ex, Kaitlynn Carter. The move has made Jenner a supporting player in all the drama, along with his sometime-friend-but-more-often-enemy, one Mr. Spencer Pratt. Have y'all seen Spencer Pratt's tweet about open marriage? It's pretty hilarious, but it also shades Cyrus, Jenner, and Carter so damn hard.

OK, so, here's what you need to know before we get to the tweet. See, Jenner and Carter announced the end of their marriage through a rep on Aug. 2. Although, as it turns out, the former couple was never even legally married in the first place. Carter also recently confirmed on The Hills: New Beginnings that she and Jenner participated in threesomes during their ~marriage~ with other women.

Jenner even reportedly admitted as much during a 2015 interview to promote his MTV show Sex With Brody, stating:

Anyhoo, Pratt — never one to shy away from an opportunity to stir up trouble — entered the story on Sept. 18, when he took a shot at Jenner, Cyrus, and Carter by retweeting a quote that Silicon Valley’s Thomas Middleditch, 37, gave to Playboy.

The quote Pratt retweeted was: "Swinging saved our marriage." Then he added the line, "Until Miley comes along and swoops your girl."

I mean, I'm not usually a big Spencer Pratt fan, but this shiz is hella funny. And the good people of Twitter seem to agree.

Check out some of these reactions to Pratt's tweet:

For the record, there reportedly wasn't any actual girl-swooping going on in the Jenner-Carter-Cyrus situation. According to TMZ, Cyrus and Carter didn't get together until after they had both broken up with their spouses, and until after Cyrus first tried to save her marriage to Hemsworth.

Here they are kissing on horseback in Montana on Sept. 13!

Meanwhile, both couples — Cyrus & Carter and Jenner & Canseco —were spotted at the Columbia Records’ MTV VMAs after-party on Aug. 26. But despite the potentially awkward circumstances, zero drama reportedly ensued.

"There was no drama whatsoever," a source told HollywoodLife. "Kaitlynn and Miley did their own thing, while Brody and Josie did theirs. The night was all about positivity."

I need to channel that level of positivity in my life!