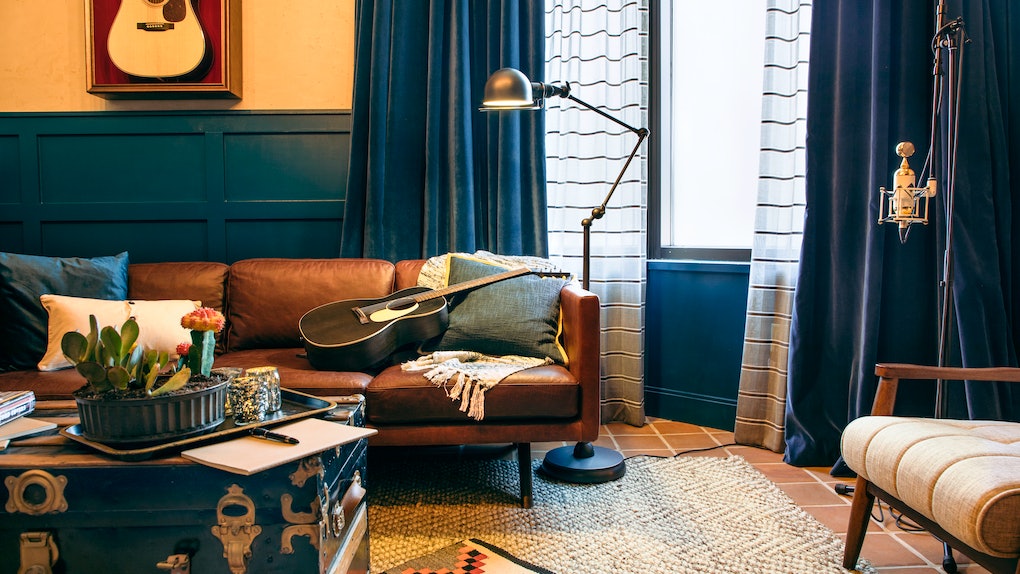 In case you haven't noticed, country music is having a major moment right now. Just take this year's Album of the Year winner, Kacey Musgraves, into consideration. The songstress scored a Grammy for her cosmic-country album, Golden Hour, which proves that the evolving genre is on the rise. TBH, I'm inspired by her success — and if you are, too, you might be interested in learning the ins and outs about songwriting. Thankfully, songwriting retreats at the Hutton Hotel in Nashville, Tennessee, are coming to teach you how to write like the stars. (FYI, Musgraves isn't connected to the hotel — I'm just using her as an example of a phenomenal singer-songwriter.)

Anyway, what's a songwriting retreat, anyway? Well, each one of 'em can be a little different, depending on where they're held. But based off of my own experience, all songwriting retreats have one thing in common: They let you focus on music (and only music) for the duration of your getaway. Whether you're busy co-writing songs, exploring music venues, or learning about the industry, the retreats will fully emerge you into a "music" mindset. As someone who's been writing songs for over 10 years, I was super interested to see what the upcoming songwriting retreats at Hutton Hotel were all about — so I hopped on a plane and went to Nashville.

My experience at the Hutton Hotel was similar to what guests will undergo when the retreats are open to the public in summer 2019. Since that's still a few months away, I'll walk you through the process of what you can expect.

In short, the goal of Writers Retreats at the Hutton Hotel will be to teach its guests how to write songs. To start the weekend, aspiring songwriters will gather for a welcome reception. When I experienced the welcome reception, I met with other retreat-goers and talked to everyone who was running the retreat, and future guests will do the same. FYI, Grammy-nominated producers, songwriters, and engineers will be managing the weekend, along with Jill Schmidt, the Director of Programming for Analog (the hotel's attached music venue).

After the reception, retreat-goers will be taken into an introductory workshop, according to a Hutton Hotel press release. Then, they'll finally break off into separate writing sessions, where they'll eventually record what they've written. With that being said, those who sign up for the retreats will get to record the songs they wrote throughout the weekend in the fully-equipped, on-site Writers Studios.

In case you're unaware, the Hutton Hotel's Writers Studios are working recording studios where a majority of the retreats will be held. They aren't just any studios, though. Believe it or not, Maren Morris and Zedd recorded their hit song "The Middle" in the studios — which means retreat guests will be able to write in the same space where Morris sang.

I was starstruck just being there, to say the least.

Let's talk a little bit more about those rooms, though. For starters, there are two of them, and each one has a completely different vibe. Plus, they were each conceptualized by famous singer-songwriters including country musician Dierks Bentley and OneRepublic's Ryan Tedder (with the help of Studio 11 Design, of course).

Bentley's room, which was my personal favorite, features a rustic "Arizona" look. Between the Navajo area rugs, warm color scheme, and acoustic guitars on the wall, I felt super cozy in there.

Tedder's room, on the other hand, has a "New York City loft" feel. Considering the fact that I've lived in The Big Apple for a while, it felt very homey to me.

Aside from spending ample amounts of time in the Writers Studios, retreat-goers will be able to explore some of Nashville's most iconic music venues and museums during their trip. Some of those legendary spots include Third Man Records, RCA Studio B (which made me cry happy tears), the Country Music Hall of Fame, and more.

Between star-studded studios and historic music spots, there's no doubt in my mind that the Hutton Hotel wants to teach you everything you need to know about songwriting.

Those of you who want to learn more about the art will be able to sign up for the Hutton Hotel's songwriting retreats soon. The four-day weekend getaways will take place in July, August, and September 2019, so clear your schedules accordingly. The retreat prices are still being determined — but you can reach out to the Hutton Hotel with questions in the meantime.

More like this
What Is Boo Bash At Disney World? The Halloween Event Has Rides, Music, & Themed Treats
By Cianna Garrison
Here's How To Share Spotify Canvas Art Videos On Snapchat For A Dynamic Experience
By Lara Walsh
The 'Friends' Experience In NYC Sleepover Opp Will Make You Say, "Oh. My. God."
By Rachel Chapman
Stay up to date