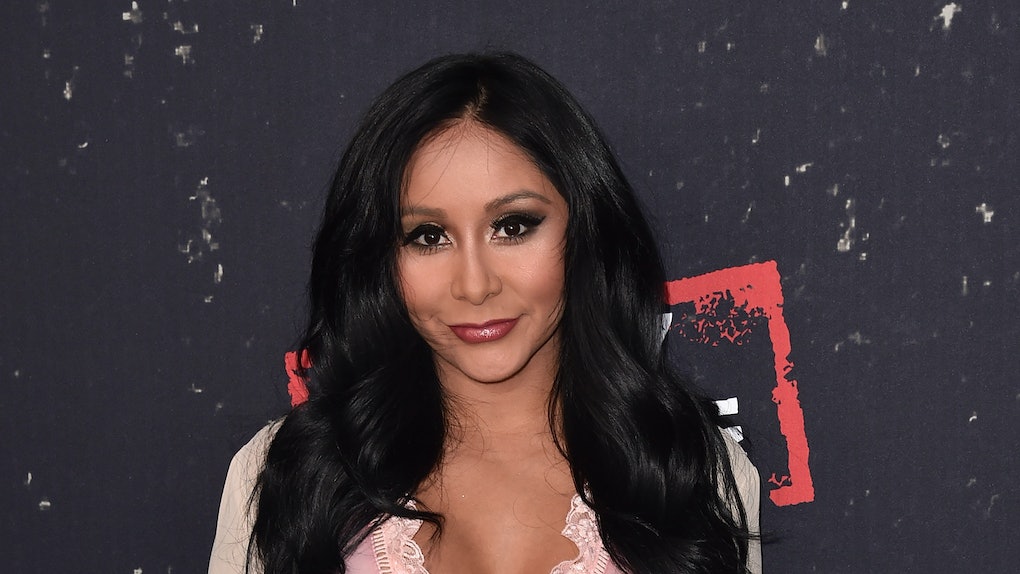 It was a new world back in December of 2009 when The Jersey Shore first fist-pumped its way onto television. I was in college, eating pop-tarts for dinner, and drinking minute-maid powder and vodka to wash it all down. Nicole "Snooki" Polizzi was my immediate favorite person on the hit series. She was wild, fascinating, uninhibited, and while there are loads and loads of haters out there who will likely say whatever about her — you've got to give it to the girl. She knows how to have a good time anywhere, no matter what. Snooki's adoption story video might be a stark contrast to the footage of her sprinting to the beach in fuzzy green slippers and a belly full of tequila shots, but it's so worth the watch.

Today, Polizzi is the proud mother of two, married to her Jersey Shore sweetheart Jionni, and still serving that Jersey Shore realness via her personal vlog series. While the hair, nails, and accent are all still there, so is a fresh new dose of maturity. Her story about her adoption is engaging, interesting, and emotionally charged, but you can't help but notice a sense of ease about her. As she puts it, "I'm just very content with it."

For those of you that are just catching up, Nicole was adopted by her parents Helen and Andrew Polizzi at six months old from Santiago, Chile. Polizzi says that when they saw her for the first time she said the words "mama" and "dada," and that was it. Polizzi explains, "They flew all the way to Chile to come pick me up and they said that right when they saw me I was like, 'Mama. Dada,' so it was, like, meant to be. I could tell because, you know, things just work out that way. It's called fate."

Polizzi says she doesn't like to call Helen and Andrew her "adoptive parents" because it doesn't feel right to her. For her, they're simply her parents. "Ew I hate saying 'adoptive parents' because they're my parents. It's weird," she says. "It doesn't affect me like that like other adopted kids feel, I guess."

Still, Polizzi claims she always knew she was adopted even before she ever had a conversation with her parents about it. "I always knew, [my parents] didn't have to tell me. They didn't have to sit me down at 10 and be like, 'Nicole, you're adopted,'" she says. "Like, I knew. I'm like, 'We don't look alike. I'm brown, you're white. This doesn't make sense.' But I always knew in my heart I was adopted and I was totally fine with it."

Eventually, around the age of 21, Polizzi says she got her father drunk and convinced him to explain to her why her birth parents put her up for adoption. According to Polizzi, her birth parents had multiple siblings and weren't able to afford a child. "I can't even imagine, because I have two kids, putting up a child for adoption to give them a better life. Like, that's so amazing for them. That shows how much they loved me." She added, "I could never do that... I can't even imagine how they felt giving me up, but thank you for that."

One day, Polizzi says she would like to meet her birth parents but jokes about being concerned over how they would communicate considering she never learned how to speak Spanish. She finishes her vlog by wisely stating,

I am blessed with the fact that I have my adoptive parents. They gave me an amazing life and they deal with my sh*t, which is crazy. I always wonder if I was never adopted and I stayed with my birth parents would I still be a hot mess like this, just in Spanish? Probably! I feel like I was always meant to be this hot mess, but I'm definitely thankful for my life.

Something tells me you'd be adored and definitely famous anywhere, Snooks.