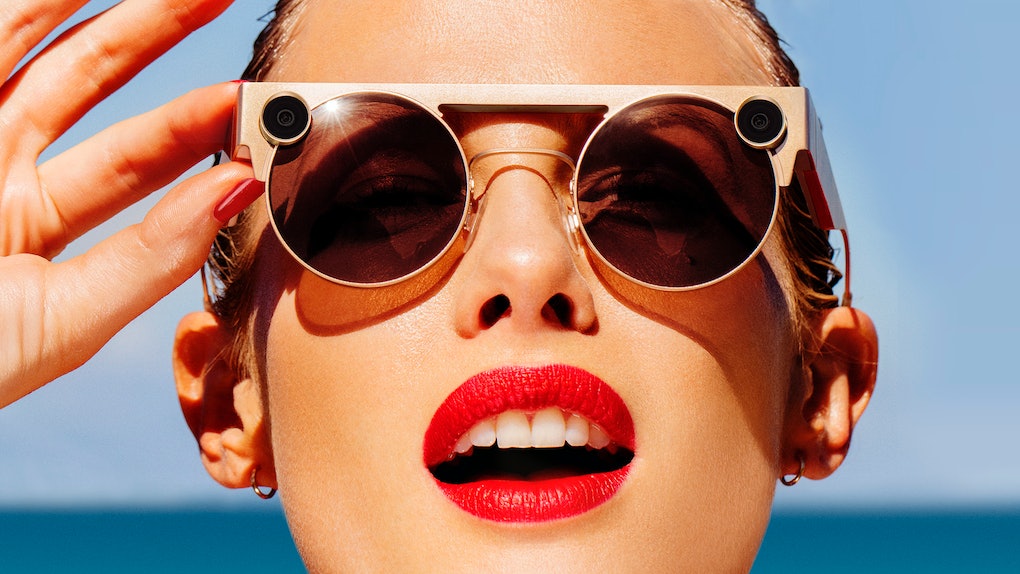 Are you a huge Snapchat fan that can't go anywhere without sharing your daily happenings in real-time? Well, you can take your Snapchat game up a notch this year, and be the talk of the town with Snap's new sunglasses: Spectacles 3. The company unveiled details about the new edition Spectacles 3 on Aug. 13, and get this — the new glasses have the capability to capture snaps in 3-D. It sounds totally out of this world, but it's actually happening. The Snap Spectacles 3 glasses 3-D effect is going to make your stories a whole lot more interesting.

In an Aug. 13 press release shared with Elite Daily, Snap outlined the innovative design that puts the wearable camera ahead of the pack. The biggest update you'll want to know about is that the new Spectacles 3 feature dual HD cameras, which means you can actually capture moments in 3-D! You can take your snap for up to 60 seconds continuously, and then transform it using 3-D Effects. All snaps will transfer in HD to Memories using wi-fi, so that you'll be able to add effects to your pics as well as export them to Camera Roll for saving, sharing, and more. Honestly, it's got me feeling pretty hyped — maybe it's just me, but 3-D is what really makes a pic come to life. Watching your 3-D snaps on the included 3-D viewer will make you feel like you're seriously reliving the memory. Of course, you'll be able to take still shots, too, by pressing and holding the button for video.

It'll be a bit of a splurge, though: per the press release, the specs will run you a cool $380. You'd better hurry if you want to grab them, too. According to Snap, the sunglasses are a limited edition product, so you'll want to make moves on this one. As of Aug. 13, you can place your pre-orders on the Spectacles website for a shipping date in "fall 2019." It may still be summer, but I can't blame you if you're already thinking about making these your perfect gift for the holiday season!

Besides the major camera upgrade, there are other features that separate Spectacles 3 from older versions. One of these changes is perhaps the most obvious: How the glasses look. According to Vogue, "the first two generations of the sunglasses, released in 2016 and 2018 respectively, were bulky, plastic and multicolored — almost toylike." Not so now. The new specs come in two colors, per the press release: Carbon, which is a monochromatic black, and Mineral, which is described as a hint-of-gold look "inspired by cosmetic hues." Pairing these with any outfit won't be too difficult. It's also worth noting that the sleek design of Spectacles 3 allows for charging on-the-go with the included charging case from Snap, per the press release. So, you won't need to stress about low battery while you're out and about.

All in all, Spectacles 3 sound like they're worth the upgrade. They're hassle-free, stylish, and above all, a super cool way to make memories come alive. If you ask me, it's time to start sharing your world in 3-D this fall.

More like this
These Tweets & Memes About The Purple iPhone 12 Are Seriously Hype Over The Hue
By Lara Walsh
Here's Where To Find iOS 14 App Icons To Customize Your iPhone Home Screen
By Lara Walsh
Can You Blur Your Zoom Background On Your Phone? Here's The Deal With This Clutch Feature
By Lara Walsh
Stay up to date