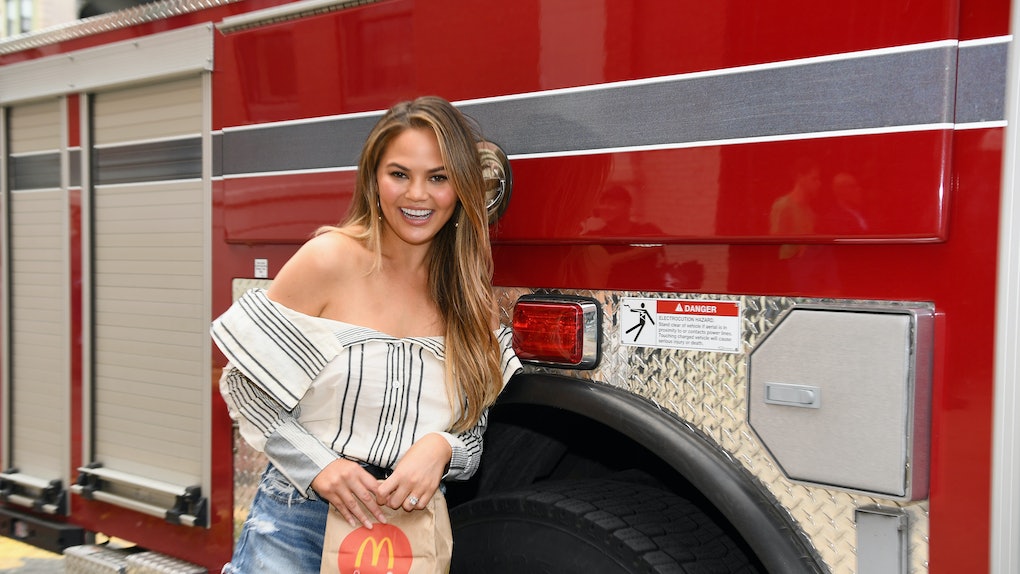 I think we can all agree that even though Chrissy Teigen is a gorgeous supermodel who’s married to the amazing John Legend, she's about as real as they come. Chrissy Teigen’s response to an accidental nipple slip just earned her about 20,000 more realness points because she proves, yet again, that she doesn’t care a whole lot about what anyone thinks. It’s amazingly refreshing.

Here’s how it all happened: Teigen popped on to Snapchat to share the spray tan process with her fans. Hey, I’m interested in just about anything she gets up to, so sure, I’m game for a little Teigen tan time. Let’s go. So Teigen, sporting a shower cap and crossing her arms over her bare chest, explains the whole thing — only she had no clue that a total nip slip was in progress.

Teigen has always been pro #FreeTheNipple, so the fact that it happened is no biggie. The follow up response, however, is spectacular. She posted a new video, tweeting: “for immediate release,” in which she apologizes in the most Teigen way ever, with her signature dose of humor. In the video she says:

I just wanna apologize to everyone I know. I’ve let my friends down, I’ve let my family down. I have nipples. It’s not something I’m proud of.

Teigen also shared this hilarious inside look at her assistant’s reaction to the Snapchat oops, with the explanation: “What is it like being an assistant in Hollywood, you ask?”

The screenshot shows her assistant calling her attention to the nip slip, writing “FYI your nipple was fully out in one of your snaps... I deleted it.”

Fans were quick to point out what Teigen might not have been aware of, with tweets such as “‪@chrissyteigen‪ girl delete your snap we just saw some nipple action I’m not complaining I don’t think you was trying to show us lulz," and "‪@chrissyteigen ‪hello I love you and you're my queen but I think your nip is out in your spray tan snap and I don't think you meant it."

Another person shared "‪@chrissyteigen‪ pls watch your snap and tell me if you notice a little something in the bottom left corner."

Others cheered her on, including tweets like “‪@chrissyteigen‪ nipple straight in her snap story lmfao ok gurl free that nipple.”

Teigen's response was also a crowd pleaser, with one fan noting: "saw ‪@chrissyteigen nipple on her snap story, then she deleted it & put up a sorry story & ive never laughed so hard. she is my spirit animal.”

Another fan echoed the ‘spirit animal’ idea, writing, “This is the exact reason that ‪@chrissyteigen is my spirit animal, my goddess, my comic relief, basically everything! I freaking love her!” Agreed.

Back in 2015, Teigen posted a topless photo of herself on Instagram, which was banned because of their “no nipple” policy. Teigen tweeted at the time, “the nipple has been temporarily silenced but she will be back, oh yes, she will be back.” She wasn't kidding.

Teigen also retweeted a video of her interview for the newest Vogue magazine installment of "73 Questions," and there was plenty of revealing stuff, including her biggest fear (“dying a slow, agonizing death”), her late night food craving (Hot Pockets), and her relationship with Legend summed up in three words: “Keepin’ it sexy.” Oh, and Luna makes an appearance too... get ready for your heart to melt.

I think we can all agree that Teigen is queen, right?