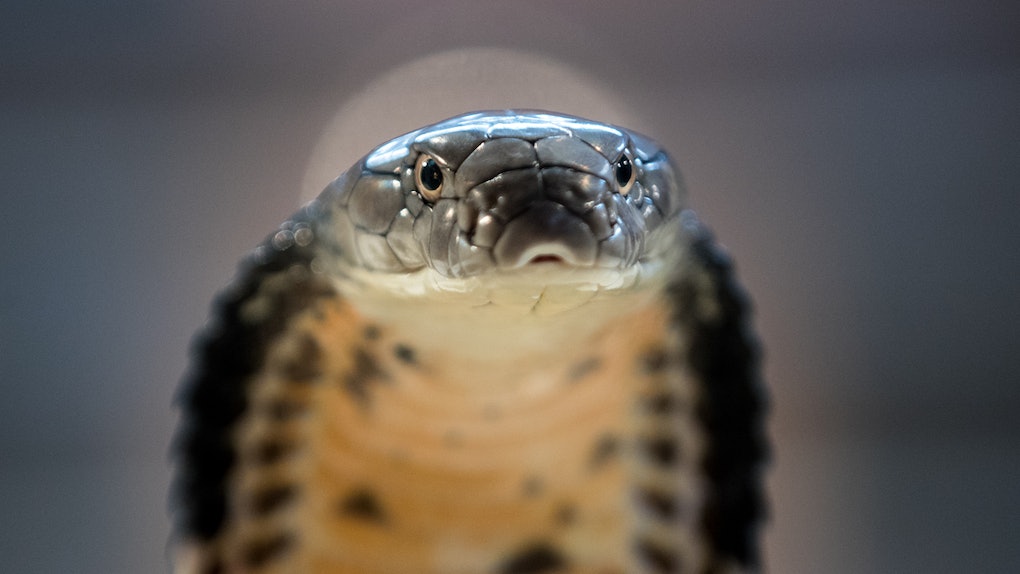 Snakes Hiding In Toilets Is A Real Thing, & It's Pure Nightmare Fuel

Hi, hello there, dear friend. I'm sorry to report that, with one month left in this hell year, 2017 is still at it. This time: snakes. To be more specific: snakes in toilets. Eight-foot-long pythons crawling out of u-bends and biting people in Bangkok.

It's not an urban legend. An eight-foot-long python recently crawled out of a toilet in Bangkok, Thailand and bit a woman, leaving half-inch-deep punctures in her thigh. And then a second giant python slithered out of that same toilet a week later.

The worst part? This nightmare fuel is not some freak once-in-a-lifetime story. No, instead, as The New York Times reports, as of Monday, Nov. 27, the Bangkok Fire and Rescue Department — which removes snakes, including pythons and king cobras from homes — had received 31,801 calls for help removing snakes from homes in 2017. Per the Times, "that is more calls than for all of last year (29,919), and more than three times the number in 2012 (10,492)."

You, like me, may have questions. Chiefly: what did Bangkok do to piss off the universe, that it's apparently so full of toilet-snakes? Bangkok didn't do anything (that we know of), but the enormous Thai city was built on a reptile-friendly swamp, which means that snakes happen sometimes. Combine that with the fact that the city of 8.2 million is, per the Times, expanding more and more into once-wild lands full of snakes, some of these legless reptiles are bound to slither their way into people's homes seeking shelter. Especially due to the fact that this has been an especially wet year, even by Bangkok's standards. So, encroaching on habitats and record rain means eight-foot snakes in toilets.

Never has there been a better advertisement for fighting urban sprawl.

So, yes, snakes in toilets are more than just the stuff of urban legend, and depending on where you're located, they're also more than once in a blue moon. For instance, a Seattle family recently discovered a four-foot python hiding in their apartment toilet — something buzzy and newsworthy for sure, because OMG what. Then there were the two enormous snakes — one eight feet long, the other ten feet — found in different toilets in Australia in 2015 (To be fair, that was in Australia, where everything is deadly). And there was also the 2013 instance of an Israeli man who got his penis bitten by a toilet snake, which is some definite nightmare fuel.

Despite the fact that, if this happened to me, I would scream and find a tall surface to scramble on top of, the fact of the matter is that humans don't have that much to worry about when it comes to snakes (half-inch puncture wounds aside).

Deputy Director of the Bangkok Fire and Rescue Dept. Prayul Krongyos told the Times, “stories of snakes invading homes always sound scary, but as long as you don’t provoke them, they won’t hurt you. There are only a few cases where snakes come into people’s houses and hurt them.”

In fact, Prayul said, snakes in Bangkok do more good than harm. They take care of rats and other vermin in garbage piles. Good sneks, sure, but I will maintain the same rule I do with spiders: go on and kill gross bugs, but stay the heck away from me.

So anyways, maybe the takeaway is that you should always look before you pull down your pants and take a seat? A toilet snake is terrifying, but also sort of great in terms of pest control? I dunno. But I will definitely be double checking my toilet for the next few days. No shame if you do too.