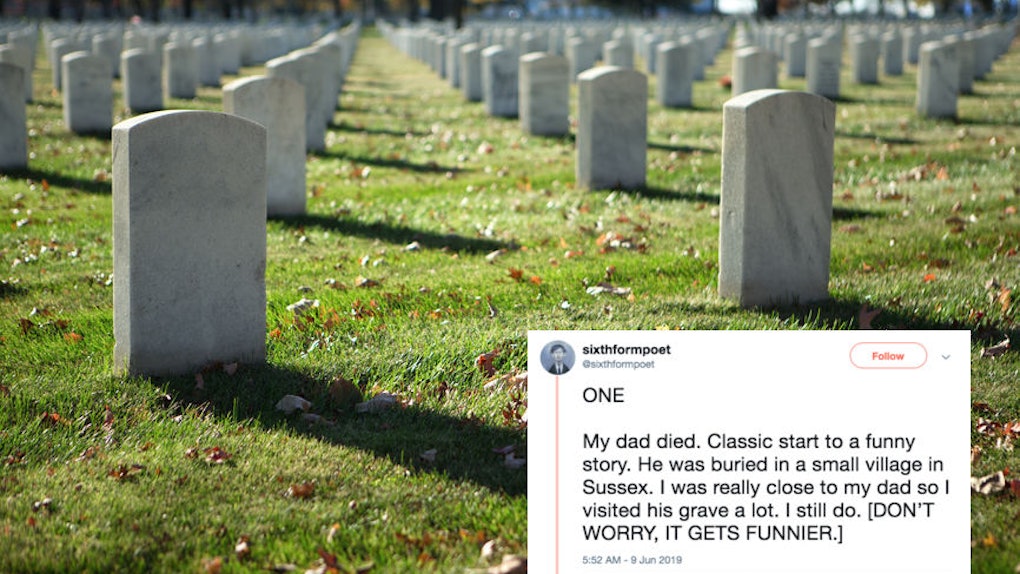 If you thought your story about how you met your significant other was cute, there's a guy on Twitter who's ready to give you a run for your money. No, seriously. @SixthFormPoet's story about meeting his wife at a cemetery is better than any rom-com out there right now.

It all started when Twitter user @SixthFormPoet lost his dad. "He was buried in a small village in Sussex," he wrote at the start of a long Twitter thread he devoted to this story. "I was really close to my dad so I visited his grave a lot. I still do."

This is all lovely, but Sixth Form Poet began to feel sorry for the man buried next to his dad. "Died on Christmas Day aged 37, no one left him flowers and now there’s a pop-up florist in the grave next door," he explained. "So I started buying him flowers. I STARTED BUYING FLOWERS FOR A DECEASED MAN I’D NEVER MET."

I mean, it's dark. But you have to see the comedy there. And the story only gets better from there.

"I did this for quite some time, but I never mentioned it to anyone. It was a little private joke with myself, I was making the world a better place one bunch of flowers at a time," he continued. "I know it sounds weird but I came to think of him as a friend."

The problem was, he had no idea how his new "friend" died or why nobody would bring flowers. "I wondered if there was a hidden connection between us, something secretly drawing me to him," he shared. "Maybe we went to the same school, played for the same football club or whatever. So I Googled his name, and 10 seconds later I found him."

What he found wasn't exactly pleasant. "His wife didn’t leave him flowers BECAUSE HE’D MURDERED HER. ON CHRISTMAS DAY," he wrote. "After he murdered his wife, he murdered her parents too. And after that he jumped in front of the only train going through Balcombe tunnel that Christmas night."

So he found out where they were buried, bought flowers, and headed over to their cemetery. "As I was standing at their graves mumbling apologies, a woman appeared behind me," he shared. "She wanted to know who I was and why I was leaving flowers for her aunt and grandparents. AWKWARD."

OK, guys. Brace yourselves. Here's where things get really good. "I explained and she said OK that’s weird but quite sweet," he continued. "I said thanks, yes it is a bit weird and oh god I ASKED HER OUT FOR A DRINK. Incredibly, she said yes. Two years later she said yes again when I asked her to marry me because that is how I met my wife."

And that, my friends, is the end of literally the best story ever.

More like this
Zac Clark & Tayshia Adams Are Wedding Planning & I’m So Pumped
By Lydia Wang
When Are Ariana Grande & Dalton Gomez Getting Married? Here's The Reported Tea
By Corinne Sullivan
The 25 Sexiest Comments Made By Celebrities On Their Partners' Instagrams
By Corinne Sullivan
Stay up to date