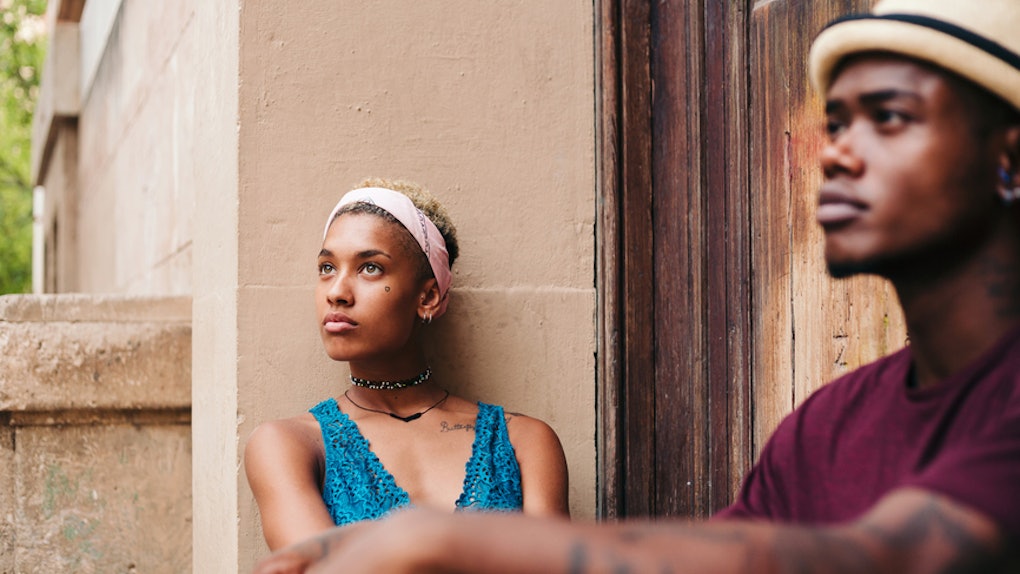 Signs You Need A Break From Your Relationship For A While

There are plenty of songs about breakups, but not enough songs about how awkward it is to take a break from someone you love. But sometimes you need to take a break from your relationship in order to evaluate whether it's truly right for you, and it can be difficult to determine when it's right to do so. It's an impossible conversation to have. "I still like you, I don't want this to be over, but like, get away from me for a while?"

And then there are all the rules that come with taking a break. Do you hook up with other people? Do you talk? Do you still see one another? Sometimes it's easier to stay with one another — miserable and confused — rather than navigate the bizarre territory that is the gray area of a break. Plus, how can you differentiate between a rough spot, and needing to take actual time apart?

So I asked Kali Rogers of Blush Online Life Coaching what the signs are that you need to take a break from your relationship. If you recognize any of these, it might be time to have a talk with your partner.

You Don't Want To Kiss Anymore

I was once repulsed by the thought of hooking up with one of my boyfriends. Seriously. I thought he had bad breath and small hands. He probably didn't have either, but something had changed in our relationship where all the sudden my body started to hate him. I recoiled from his touch. While I stayed with him throughout it, trying to make things work, I ended up regrettably cheating on him. I had ignored the very clear signs that we should have just taken a break, or broken up, instead.

Rogers says, "If you don't want to kiss your partner or don't even like the idea of kissing your partner, then chances are the physical attraction has faded and you need a breather. This doesn't necessarily mean the relationship is over, but it does mean that you probably need some time to think about whether or not this relationship is right for you."

If you've lost the lust in your love life, it might be time to be just friends.

She continues, "Perhaps you're introverted and you've had too much 'together' time lately or you both just got out of a stressful time — but something is off. Take some time for yourself and see if this relationship is worth working on."

You Fight Over Every Little Thing

I vividly remember shouting, "Do you have to breathe like that?" at an ex-boyfriend as he ate a pastrami sandwich at a deli before we broke up. It was like each time he took a bite, he deeply inhaled through his nostrils — flared and wide — and then let out a huge gust of steamy, meaty breath my way after he swallowed. I recall looking at him thinking, "If you breathe my way one more time, I am going to kill you."

Apparently, feeling that way about the person you're supposed to love is not a good sign. Who knew!

"Couples fight. It's a healthy way to express your feelings and you're not going to agree with each other all the time. But when you start fighting over EVERYTHING — what's for dinner, what time you want to wake up in the morning, whether or not you see the movie — that's a sign you need a break. Either you are irritated over everything in your life and just need some time to relax and unwind, or the relationship might have some hiccups that need to be smoothed over."

Needless to say, I was definitely irritated over everything, and we ended up breaking up. Who knows what good could have happened if we just decided to take a break instead?

She continues, "Time apart can help you determine what's bothering you and how to resolve the differences. Perhaps the relationship doesn't bring out the best in you, and that's OK. But it's best to find out now instead of waiting for a dramatic breakup later."

You're Not Proud Of Them

While some people think it's annoying, I really like when couples are super into one another. That's how love should be, right? I was once at a dinner party and this guy was talking about all the amazing work his girlfriend was doing in her career. She had just started her own business, and he was genuinely so in awe of her. Granted, he talked about her for a little too long and started sucking up all the energy in the room, but the sentiment was still there: he was truly proud of the woman he was dating.

Rogers explains, "Most couples brag about each other. They want to gush over every little thing the other one has done and feel genuinely proud for being on the others' arm. But if you are finding that you are starting to feel bored by — or even ashamed of — your partner's accomplishments, you might need to some to either reprioritize your values or get clearer about what you are looking for in a significant other."

I once dated a man who I initially thought was an entrepreneur. I later found out that this meant gambling addict. Needless to say, when I lost respect for his extra curricular activities, I also lost respect for him. And soon after, our relationship ended as well.

If you recognize any of these signs with your partner, it might be time to reevaluate whether or not you and your significant other need some space. It could be what you need to regain the spark in your relationship, or it might help you to realize it's time to move on. Either way, it's valuable information you need to settle any questions you've been having — so why not give it a shot?