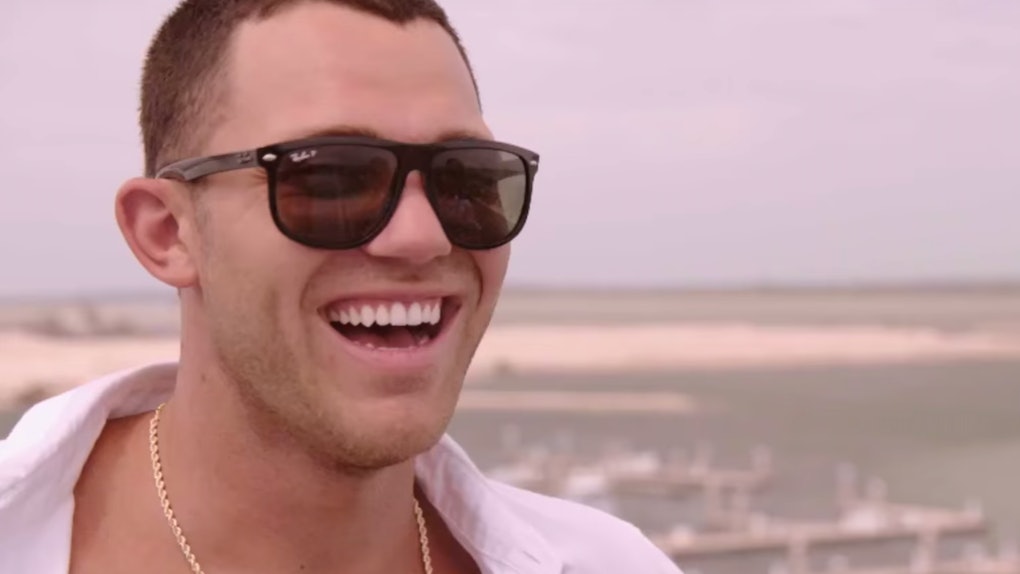 Siesta Key fans, get excited, because a new member of the reality show's family is on its way. On Dec. 15, Siesta Key Star Alex Kompothecras announced he's expecting a baby with his girlfriend Alyssa Salerno. As you can imagine, this big reveal, which just took place about three weeks before the start of Siesta Key's new season, now has audiences even more pumped for Jan. 7.

Salerno, a hair salon owner based in Sarasota, Florida, is a new addition to the Siesta Key cast in Season 3. Fans of the show might have had a hunch she would be joining the show, since she and Kompothecras have been documenting their relationship at length on social media. Their pics together go all the way back to June 14, when Kompothecras shared a photo of him holding Salerno. "There are some people in life that make you laugh a little louder, smile a little bigger and live just a little bit better😋😍," he captioned the pic.

In a similar display of modern love, Kompothecras took to social media to share their latest major life update. The photo showed the couple kissing in matching white outfits, alongside the caption "Little princess on the way😍😍"

Kompothecras' relationship with Salerno comes after a tumultuous love affair with his Siesta Key co-star, Juliette Porter. The couple's dramatic romance was a staple of the show's first two seasons, but things got particularly contentious when Porter caught Kompothecras in bed with two other girls in Season 2. Despite the discovery, the pair continued their on-off relationship for several months before apparently calling it quits in October 2018.

Now, a recent comment from Porter suggests there's still drama between the two of them, to say the least. Nine hours after Kompothecras' pregnancy announcement, Porter commented on the The Morning Toast's Instagram post about the news, saying, “Weird how he cheated on her with me several months ago but ok." Elite Daily reached out to MTV about this, but the network declined to comment.

Beyond all this, fans can expect even more relationship action in Season 3. According to a press release from MTV, Porter is going to pair up with Bachelor alum and the newest addition to the Siesta Key cast, Robby Hayes at some point in the season. Hayes and Porter reportedly ended things after only a few months together, but viewers can expect to see their relationships with each other, and their exes, play out on screens very soon.

More like this
'Grey's Anatomy' Quotes That Will Heal Your Broken Heart
By Alexis DeCarvalho and Lexi Williams
These Tweets Of 'Girl Meets World' Videos Show Why The Series Is Still Controversial
By Cianna Garrison
'Emily In Paris' Season 2: Premiere Date, Trailer, Cast, Filming News, & More
By Dylan Kickham and Ani Bundel
Stay up to date