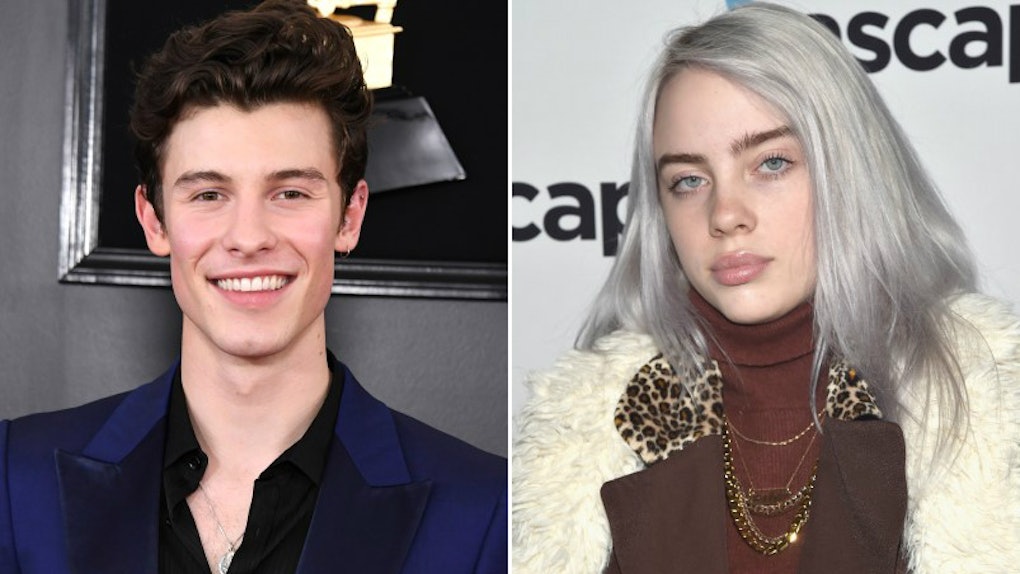 Uh oh! Billie Eilish just revealed that she ignores texts from other celebs and one celeb, in particular, seems a tiny bit, maybe upset about it. Shawn Mendes’ reaction to Billie Eilish ignoring his texts is kind of sad, but also kind of funny. So, here’s what happened: during a March 2019 interview with First We Feast, Eilish revealed that Mendes was the last famous person to text her. But she straight-up ignored him.

“Shawn Mendes texted me, but I didn’t respond," she said during the interview.

When Mendes caught wind of the interview, he naturally took to Twitter to respond. In a March 29 tweet, Mendes had a simple response to the revelation that Eilish had ignored his text.

“LOL wow,” Mendes wrote in his tweet. In the tweet, Mendes quoted a video of Eilish saying that she didn’t respond to his text and laughing quite emphatically about it. I’m sure Mendes took it all in good humor, but it probably isn’t the most thrilling experience to have the fact that you got left on read put on blast.

Obviously, no one knows why Eilish ignored Mendes’ texts or what Mendes texted her in the first place (or if she maybe reached out at some point after this interview). But one thing people do know is that Mendes has a lot of respect for Eilish as an artist. Back in June 2018, Mendes tweeted Eilish to say he thought she was exceptionally talented.

“I think you are just really crazy talented and everybody who hasn’t listened to your music is seriously missing out,” Mendes wrote at the time.

So, maybe his recent text to Eilish was something along the same lines. Maybe he even wanted to collaborate with her on a song. Who knows!

Here's a look at Shawn Mendes' response to being ignored by Billie Eilish:

Other than chatting about how she ignored Mendes’ texts, Eilish also talked about how Justin Bieber recently followed her on Instagram and even surprised her with a DM!

“We talked about making some stuff, you know! It was crazy, though. The first thing he DM’ed me was a screenshot of, I guess he scrolled up and saw a message I had sent in 2014,” she said of her conversation with Bieber.

Apparently, Bieber gave her the same ghosting treatment she gave Mendes. So, it all came full circle, I guess. Eilish revealed that she had sent Bieber a message a few years ago asking Bieber to chat. According to Eilish, the DM read, “Hey Justin, I just wanted to talk. How are you? Please answer.”

Five years later, Bieber responded with a screenshot of the original DM and a note that said, “LOL.”

It seems like Eilish is a master at navigating awkward interactions with celebrities. I’m sure that’ll make Mendes feel a little better about being ignored. And hey, maybe Eilish will text him back five years after the fact like Bieber did with her. At the end of the day, though, I’m sure Mendes isn’t too worried by Eilish’s lack of response. I mean, he’s got other things going on... like a world tour and making non-stop hit music.

More like this
How Long Has Billie Eilish Had Blonde Hair? She Hid It For Months
By Daffany Chan
Khloé Kardashian's Response To Her Unretouched Bikini Photo Leaking Gets Honest
By Brandy Robidoux
These Tweets About Jimmy Fallon's TikTok Dance Follow-Up Segment All Say It's Too Little, Too Late
By Brandy Robidoux
Stay up to date