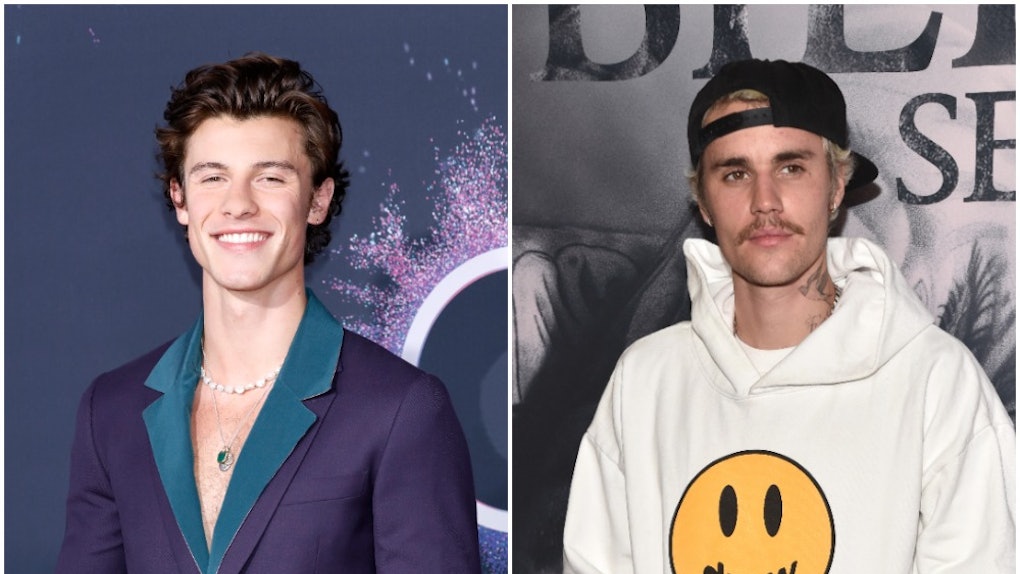 Shawn Mendes and Justin Bieber have been giving fans all the feels this year with with lyrics of their new singles. Mendes' "Wonder" tugged at listeners heart strings, while Bieber's "Lonely" left fans super emotional as he reflected on how isolating it was navigating childhood fame. On Friday, Nov. 20, the men debuted their highly-anticipated collab, and Shawn Mendes and Justin Bieber's "Monster" lyrics are just as deep as fans had hoped.

Mendes is gearing up to release his upcoming album, Wonder, and announced on Nov. 16 that the next single off the record would be a collab with Bieber. Alongside a 13-second teaser for the song on Instagram, Mendes simply wrote: "#MONSTER friday nov 20th @justinbieber." While news of the collab came as a pleasant surprise for fans, it's no shock that both Mendes and Bieber have been hard at work over the past few months.

In May, Bieber and Ariana Grande released "Stuck With U," a stay-at-home anthem for the trying times amid the coronavirus pandemic, and months later, he teamed up with Chance The Rapper to drop "Holy." Mendes, meanwhile, has been hard at work on his new album, debuting the title track on Oct. 2.

The men can definitely relate to one another when it comes to living life in the fast lane as international superstars, and "Monster" definitely plays into that. Both Mendes and Bieber sing about being put on a pedestal as musicians and celebrities, and letting people down when they inevitably can't live up to that image. In the first verse, Mendes sings:

You put me on a pedestal and tell me I'm the best/Raise me up into the sky until I'm short of breath (Yeah)/Fill me up with confidence, I say what's in my chest/Spill my words and tear me down until there's nothing left/Rearrange the pieces just to fit me with the rest, yeah

Mendes sings in the chorus:

Then Bieber comes in with his verse:

Bieber also gets the bridge, singing:

I had a chip on my shoulder, had to let it go/'Cause unforgiveness keeps them in control/I came in with good intentions then I let it go/And now I really wanna know

The "Monster" music video has a similar vibe, all shot at night in the forest, seemingly in one take. The song isn't a fast-paced pop track, but you'll still have it stuck in your head all day.

More like this
Justin Bieber's Response To Criticism For Including An MLK Speech On 'Justice' Is Open-Minded
By Brandy Robidoux
I Tried Singing While Running Like Miley Cyrus & OMG, My Lungs
By Rachel Varina
Taylor Swift's 'Fearless (Taylor's Version)' Lyric Changes Are Small, But Meaningful
By Michele Mendez
Stay up to date