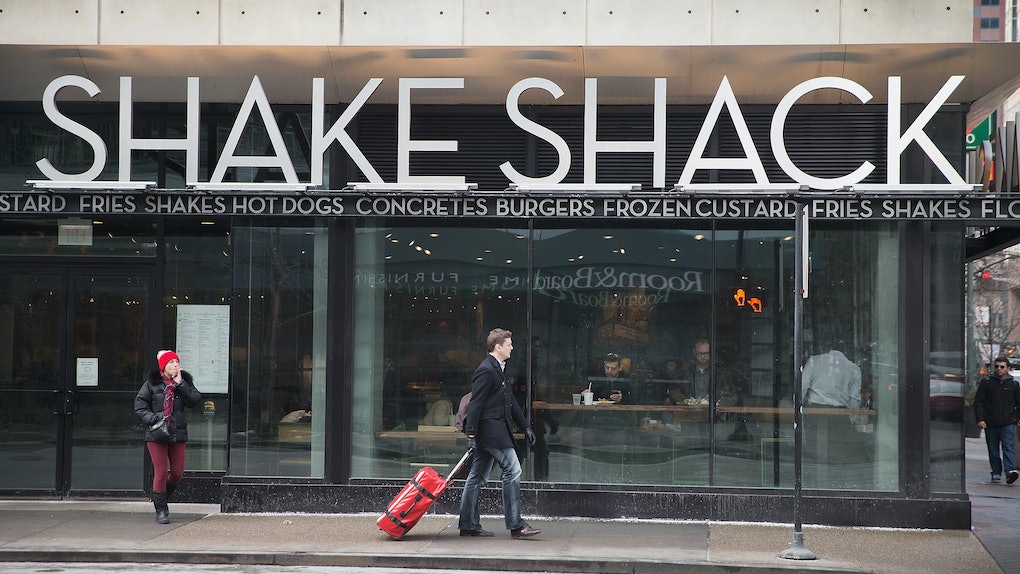 Well, this just might be the best news that I've come across in a hot minute. Shake Shack just announced that the company is launching food trucks. And it's all happening so soon. The fast-food restaurant will roll out two new food trucks in early February, per a report from Skift Table. This is a big deal in my book because this is the first time that Shake Shack is going mobile. I can't wait to see a Shake Shack food truck parked on the corner, so I can get a ShackBurger to-go. If you are wondering where the Shake Shack food trucks will be, allow me to assist. Here's what you need to know about the two new Shake Shack food trucks that are coming very soon to a street corner near you.

Shake Shake CEO Randy Garutti announced the exciting news at an industry conference in Orlando back in mid-January, according to Skift Table. At the conference, Garutti said the food trucks will be launched in New Jersey and Atlanta in early February. He didn't give an exact opening date. So, if you live in either of these two places, be on the lookout for a traveling Shake Shack truck that can cook up burgers on the spot.

Sadly, I'm based in Florida where there are currently no plans for a Shake Shack food truck. (Although, there are a handful of Shake Shack locations throughout the state, so it's not a total loss for me.) At the conference, Garutti did note that the food trucks will be used throughout the regions where the trucks are currently located, according to Skift Table. I'm not exactly sure how far each truck will travel, but I'd be willing to bet that NYC residents might see this truck pop up from time to time.

According to Skift Table, Shake Shack plans to use the food trucks primarily at "community events, festivals, private parties, and similar events that are easier to serve with a mobile cooking unit."

It seems a food truck has been on Shake Shack's radar for some time, and now the company is finally making my dreams come true. According to Skift Table, Garutti told attendees at the conference, “It’s one of those things where people have always said, ‘Why don’t you have one?' ‘Why can’t you come to my Bar Mitzvah and cook Shackburgers?'”

I can definitely get behind this concept and I fully support it. My birthday is coming up in March. If I could hire a Shack Shake food truck to show up and feed me and my guests, let's just say that would be the best present ever.

Shake Shack is starting 2019 off on the right food, IMO. Aside from the food truck news, Shake Shack also launched a scrumptious new Tiramisu Shake. I haven't tried this one yet, but this Italian dessert milkshake is high up on my list of foods to try in 2019. Take that, New Year's resolutions.

Selfishly, I really hope these first two food trucks do very well. Why? Well, I'd love to see Shake Shack expand the number of food trucks to other states around the country. I like you already, 2019.