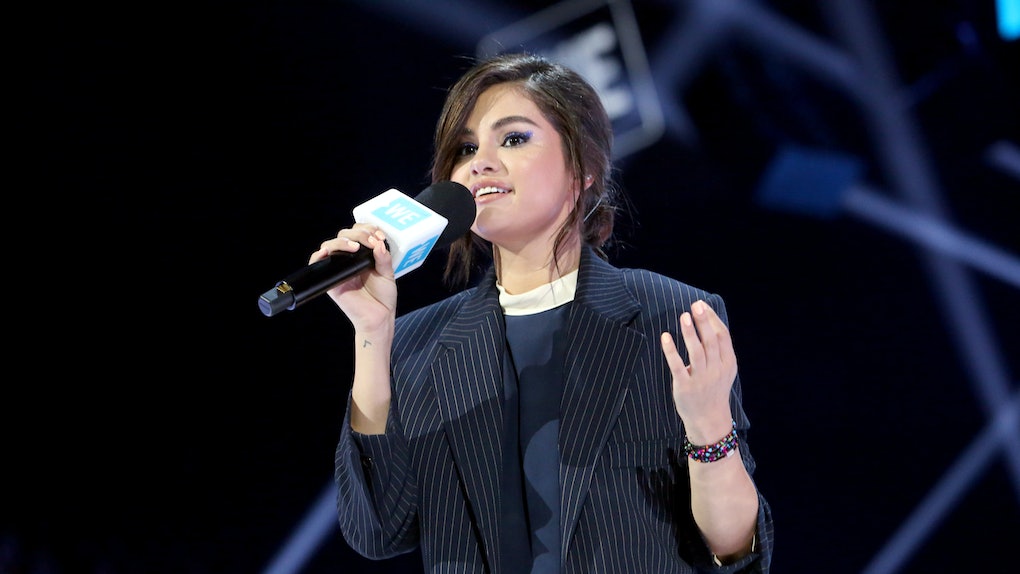 Selena Gomez is back in the spotlight and she looks marvelous, as always! The 26-year-old star attended WE Day California on Thursday, April 25, and walked the red carpet for the first time in nearly a year. The past 12 months have been eventful for Gomez. As you probably know by now, she took a social media break back in September 2018 and headed to a mental health facility shortly after, but she seems to be doing really well now. Selena Gomez’s first red carpet photos after her mental health break are beautiful.

Gomez became involved with the WE Movement just about six years ago. For those of you who don’t know, the WE Movement is a charity that works with schools, communities, and celebrities like Gomez to make a difference in the world. In April 2017 Gomez told E! News all about why she loves WE Day.

“The reason why I fell in love with working with WE Day is it's just a family here,” she said. “It's what they do for kids.”

In the red carpet photos from this year’s WE Day, you can see that Gomez was all dressed up for the day's activities. According to Page Six, she was wearing a black Dior dress and Tamara Mellon pumps. The overall look is great and her makeup is totally on point. Gomez wore her hair back for the occasion, which really helped pull the whole look together. All in all, she looked amazing and it seems like she’s happy and at peace with finally being back in the spotlight.

If you haven’t seen the photos of Gomez on the red carpet at WE Day, then you definitely need to take a moment and check them out. You can have a look at them down below:

As I mentioned, Gomez has been laying low the past several months. Back in September 2018, Gomez shared on Instagram that she needed a break from social media.

“Taking a social media break. Again. As much as I am grateful for the voice that social media gives each of us, I am equally grateful to be able to step back and live my life present to the moment I have been given,” Gomez wrote in the caption of her post, which showed her smiling at the camera. “Kindness and encouragement only for a bit! Just remember- negative comments can hurt anybody’s feelings. Obvi.”

Just a month later, she retreated to a mental health facility for some downtime. But she was back in the social media game by January 2019 with a post that reflected on the year she left behind.

More recently, she opened up about what she learned about herself during her time away from the spotlight.

"Last year, I took a lot of time off," Gomez said on the Dream It Real podcast. "I think that I needed a moment to myself because I do feel like I was growing and changing."

Clearly, Gomez has come a long way in just a short time, which is wonderful. And now that she’s finally back in the public eye, everyone’s rooting for her even more.