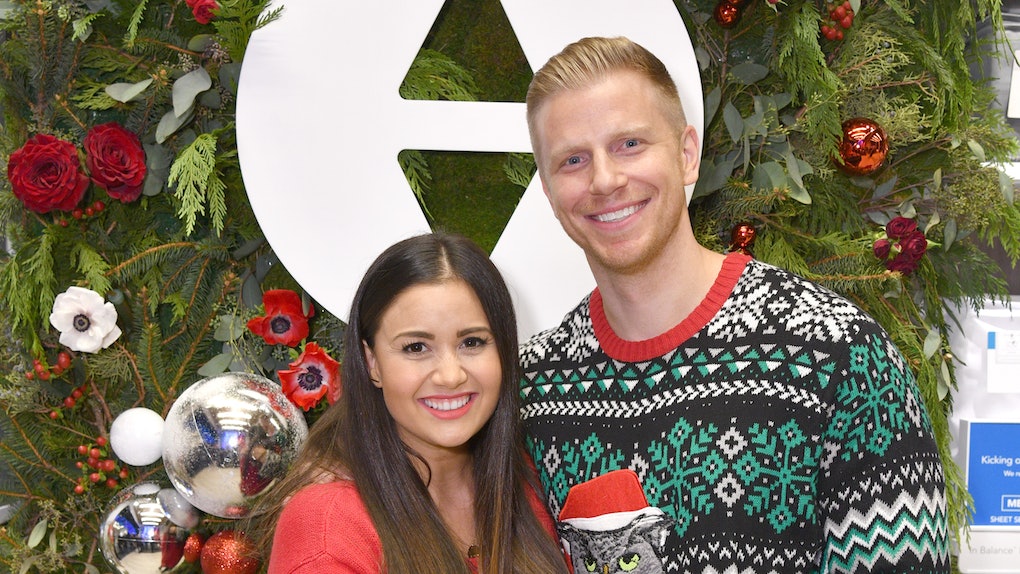 Bachelor marriages are few and far between, and although 2019 will kick off with Arie Luyendyk Jr. and Lauren Burnham's wedding, the franchise still only has one example of a Bachelor's Final Rose decision lasting until the altar. Since meeting and proposing to Catherine Giudici on Season 17 of The Bachelor, former lead Sean Lowe has since married Catherine and welcomed two children with her. After a busy year of Bachelor Nation breakups, second chances, and surprise proposals, Sean and Catherine revealed the secret to a good Bachelor marriage. Spoiler alert: it's way harder than it looks.

At Sleep Number's recent Under the Mistletoe event in New York City, the Lowes appeared alongside latest Bachelorette couple Becca Kufrin and Garrett Yrigoyen to celebrate the holiday season. Before changing their calendars, Sean and Catherine will experience their first Christmas with two sons, having had second child Isaiah in May after welcoming firstborn Samuel in 2016. "It’s gonna be so much more fun this year!" Catherine says about the holiday in an exclusive interview with Elite Daily. "Samuel knows what’s going on and he’s going to be looking for evidence of Santa and his presents. We get to watch him just explore and discover all these new things about the holiday that we didn’t get to have so much of last year."

Sharing plenty of adorable snaps on their sons on social media, Sean and Catherine will celebrate their fifth wedding anniversary in January. Although franchise fans have watched Bachelor in Paradise couples tie the knot since then and Bachelorette Desiree Hartsock married Final Rose recipient Chris Siegfried privately in 2015, the Lowes are the last lead couple to have married on TV. Although Season 22 Bachelor Arie Luyendyk Jr. will marry Lauren Burnham in January, Sean also remains the only Bachelor to marry his first Final Rose pick.

"I was very decisive," Sean jokes, referring to his differences from the famously uncertain Colton Underwood and, TBH, every Bachelor following his 2013 stint. "You’re the one, and I’ve stuck to that decision!"

The couple recognize that they're a rarity within the franchise, but Catherine sympathizes with the pairs who have struggled since leaving the Bachelor bubble. "It’s freaking hard," she says. "I give Sean Lowe so much credit, because it is really, really tough to go into this position, walk in, and be like freaking God amongst girls and be like, 'I have my pick of whoever wants me'...all the factors are against you, you don’t usually live in the same city, you don’t know each other very well, and it’s a very hard road. I can’t even imagine how many things other people have gone through in their relationships."

Although they're confident about Colton handling his Bachelor role well, we wouldn't blame the busy Lowes if they miss a few episodes of his season. In addition to raising kids with Sean, Catherine manages her own card company, LoweCo., and the couple also run their own furniture line, which appears to be a partial factor of their successful marriage. "We’ve worked together since day one of being a couple and we are great partners," Catherine says. "We rarely get sick of each other... I know that we work very, very well together and we love to be doing things together and on our time. So it’s just a great way to live."

Sean and Colton are both sunny, all-American men, but here's hoping that Sean and Catherine offer the new star some advice for a lasting relationship. Season 23 of The Bachelor premieres on Monday, Jan. 7, at 8 p.m. ET on ABC.