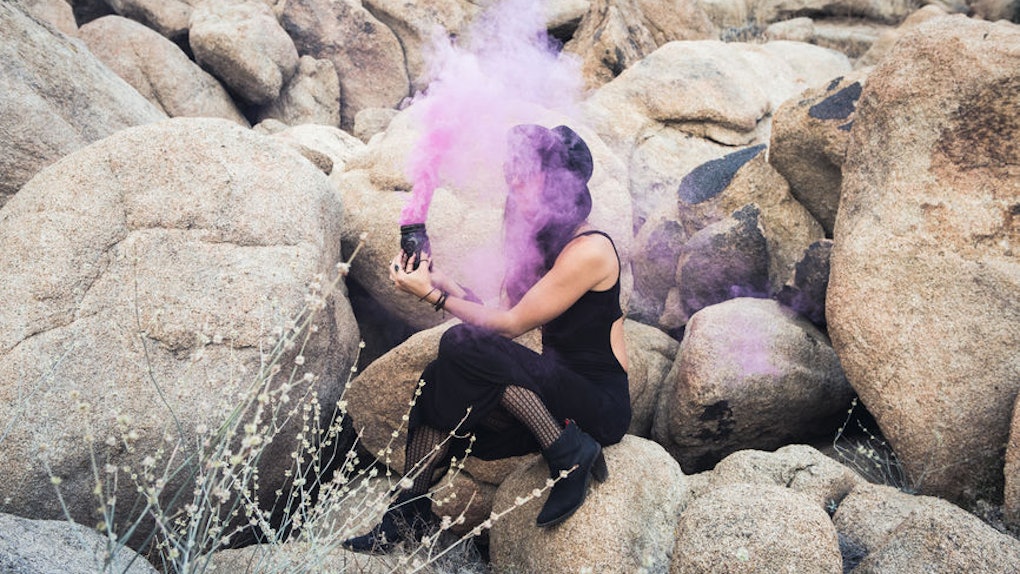 Welcome to the most misunderstood astrological season, not to mention the sign with the worst reputation. It's vengeful, oversexed, and swimming in all things taboo. Come out, come out, wherever you are, Scorpio. This is your solar revolution, and everyone's waiting for you. Scorpio season 2018 is almost here, stargazers, beginning on Oct. 23. We made it. You slayed Virgo season, made the right connections during Libra season, and now it is your cosmic duty to release the ego, and emotionally merge with another mind, body, and soul. This is your spiritual rebirth.

Truth is, that is the very essence of Scorpio. It is sexual union, death of self, and transformation. Now, when I say "death," I'm not necessarily referring to physical death. Granted, Scorpio is very much connected to the other side, as it wanders through its home in the underworld. However, death is simply another way of describing the spirituality of the term renewal. Ruin is the road to transformation, and only a Scorpio knows the true meaning of rebirth, as it is constantly regenerating throughout its entire lifetime. Fellow Mars and Lilith in Scorpio, Taylor Swift, couldn't have said it better, "I rise up from the dead, I do it all the time."

The energy of Scorpio is beyond their smoldering sexuality, and hypnotic bedroom eyes. In fact, it is the first sign in the zodiac to connect with the highs and lows of the invisible realm. It's a combination of the lightest light and the darkest dark, which ultimately proves that there's no such thing as heaven and hell. Their passion is almost overwhelming, and that in itself is a magnificent thing. However, in the midst of this polarity, and everlasting metamorphosis, Scorpio can easily drown in its own abyss of emotions.

The Meaning Of Scorpio Season

The sun is the heart of our solar system, and a representation of the ego and our soul purpose. Wherever the sun is determines the spiritual theme of the collective, sort of like the monthly astro weather. For instance, isn't it interesting how Halloween falls on Oct. 31, at the peak of Scorpio season? Exactly. Although, if there's anything Scorpio energy has taught me is, there really is no such thing as coincidence.

When the sun is in smoldering Scorpio, all things superficial will be laid to rest. Tis' the season of extremes, intense emotions, secrets, obsessions, sexual desires, and most importantly, spiritual renewal. It's a time to get down to business, in every sense of the word, sexually and realistically. Also, doing things half ass isn't going to cut it either. Scorpio wants it all or nothing at all. This is precisely why most people refer to this water sign as "extreme."

Libra will have the pink cosmo, while Scorpio prefers jack on the rocks. If Libra season was about sharing, collaborating, and finding harmony in our partnerships, Scorpio season is the same, but on steroids. Instead of keeping it "light" and "fair," Scorpio wants the raw truth, even if it comes with envy, vengeance, and emotional manipulation.

In The Eyes Of A Scorpio

The reality is, Scorpio knows nothing else. This is how they approach you, feel you, and get to know you. Probing, poking, and testing your emotional triggers, in their rawest form. Making you cry means they're one step closer to your heart, but that's not all they came for. In the end, Scorpio wants become one with your soul, and once they get a hold of it, they will never let go. They will carry your essence behind their eyes, and in their soul memory for all eternity.

If you've ever wondered why you can't get a Scorpio out of your mind, now you know.