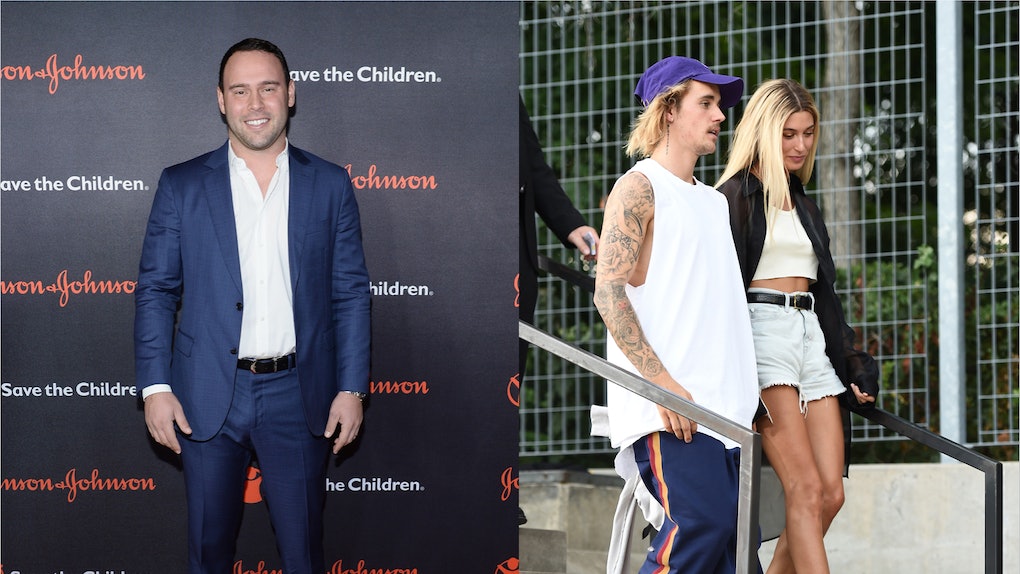 Huh, well this is a little awkward: Scooter Braun's comment on Justin Bieber's Instagram with Hailey Baldwin was probably well-meaning, but might have been more loaded than he intended. Bieber posted a selfie with his wife posing in a desert during a gorgeous sunset.

"These are the moments I live for.. alone time with you refreshes my soul," Bieber wrote in the caption of the adorable picture. "You are so out of my league and I’m okay with that! You are mine and I am yours." He added the hashtags "#foreverandever" and "#tilthewheelsfalloff" for good measure.

The post got a lot of love from lots of celebrities and close friends of both Baldwin and Bieber. For example, Baldwin's bestie Kendall Jenner, 23, also chimed in to remind Bieber that Baldwin isn't completely his. “She’s a little bit mine too,” she wrote, adding a raising hand emoji and the Venus symbol.

Braun, Bieber's manager and close friend, also chimed in to confirm that Baldwin is, in fact, out of Bieber's league. "Out of your league is the only way to go! Congrats on love," he wrote.

Bieber's the one who initially said anything about her being out of his league and Braun was just piggy backing on what he said. The comment was meant to be a joke. That being said, obviously "out of your league" is not the way to go. Yes, you should feel lucky to be with the person you're with. But they should feel lucky to be with you, as well! A healthy relationship is a two-way street. So, yeah. Braun's comment might have been misconstrued by anyone trying to take his advice literally.

Braun and Bieber are super tight friends and Bieber showed his loyalty to his friend and manager shortly after putting up the picture with Baldwin by posting an Instagram with a long caption directed at Taylor Swift.

For those of you who haven't been keeping up with the drama, on June 30 Swift took to Tumblr to express her strong disappointment that Braun just acquired all of her old music in a $300 million deal with Big Machine Records. In the post, she called Braun a "bully" and posted a screenshot of a picture Bieber posted of himself FaceTiming with Kanye West and Braun as proof of Braun "bullying" her.

Bieber responded in his friend's defense by posting an old picture of himself with Swift along with this caption:

Hey Taylor. First of all i would like to apologize for posting that hurtful instagram post, at the time i thought it was funny but looking back it was distasteful and insensitive.. I have to be honest though it was my caption and post that I screenshoted of scooter and Kanye that said “taylor swift what up” he didnt have anything to do with it and it wasnt even a part of the conversation in all actuality he was the person who told me not to joke like that.. Scooter has had your back since the days you graciously let me open up for you.! As the years have passed we haven’t crossed paths and gotten to communicate our differences, hurts or frustrations. So for you to take it to social media and get people to hate on scooter isn’t fair. What were you trying to accomplish by posting that blog? seems to me like it was to get sympathy u also knew that in posting that your fans would go and bully scooter.

Anyway, One thing i know is both scooter and i love you. I feel like the only way to resolve conflict is through communication. So banter back and fourth online i dont believe solves anything. I’m sure Scooter and i would love to talk to you and resolve any conflict, pain or or any feelings that need to be addressed. Neither scooter or i have anything negative to say about you we truly want the best for you. I usually don’t rebuttal things like this but when you try and deface someone i loves character thats crossing a line..

Then Swift's fans totally turned against Bieber and Swift even liked one of their responses that insinuated Bieber cheated on Selena Gomez, but you can read all about that gossip here. What a week.