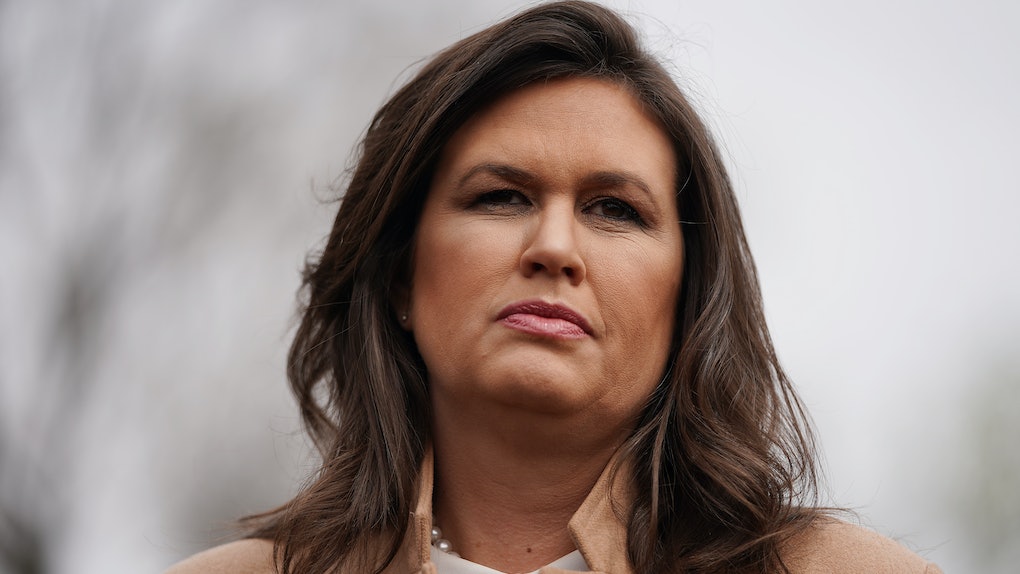 White House press secretary is probably a pretty demanding job, but like most jobs, you still have to show up (even when you don't want to). Or do you? Current Press Secretary Sarah Huckabee Sanders has been under fire for not holding regular briefings, but on April 25, she hit the podium once more. Unfortunately, Sarah Sanders' first press briefing in more than a month didn't even include real reporters.

For children of White House staff and reporters, Take Our Daughters and Sons to Work Day means you might get to sit in on a special kids-only mock press briefing. On Thursday, April 25, Sanders took her usual place behind the podium to host the children of staffers and reporters for a mock press briefing. Except she might have needed to dust it off a bit, because this junior briefing was the first one she's held in more than 40 days — since March 11 — according to Mashable. That's the longest a press secretary has gone without giving a press briefing since the tradition began during President Bill Clinton's administration, per Newsweek, just to give you a frame of reference. It's been so long since Sanders spoke to reporters that at the end of the kid's briefing, Associated Press' White House reporter Darlene Superville asked “Sarah, when will you brief for the real reporters," according to a tweet sent out by ABC News correspondent Karen Travers, who was also in the room. Sanders, per the reporter, did not reply.

Per the Associated Press, Sanders did share some real news from the podium, noting that on May 30 President Donald Trump would travel to Colorado to speak at the U.S. Air Force Academy’s commencement ceremony.

In response to a request for comment, the White House pointed Elite Daily to an exchange that took place during a March 11 briefing where Sanders was asked if the press "can expect more briefings?" Sanders responded, "I know that the president is the most accessible president in modern history." She then added,

Superville wasn't the only one to notice that Sanders came out for the kids, but hasn't fielded questions from the actual press in more than a month.

This isn't the first time the Trump administration has forgone press briefings. Sanders' new record only breaks the previous records... also set by Sanders. The administration first set a 42-day record in March, breaking the 41-day record set in January, according to Newsweek. Sanders has held a total of only two formal press briefings in all of 2019, each lasting 30 minutes or less, as outlined by The New York Times. On January 22, Trump tweeted out that he had told Sanders "not to bother" with press briefings because the press covers her "rudely and inaccurately."

Forty-five days into Sanders' stint without a press briefing, on April 24 Trump tweeted that he's the most "transparent" president there's ever been. He wrote,

No Collusion, No Obstruction - there has NEVER been a President who has been more transparent. Millions of pages of documents were given to the Mueller Angry Dems, plus I allowed everyone to testify, including W.H. counsel. I didn’t have to do this, but now they want more...

Trump doubled down outside the White House on Wednesday and told reporters, "We have been, I have been the most transparent president and administration in the history of our country by far," according to The Hill. The White House did not immediately respond to Elite Daily's request for further comment on Trump's transparency comments.

Not that anyone is asking, but I think the only real solution here is to give all the questions to the kiddos. Think of the memes.